Biden and Putin to speak amid Ukraine tension 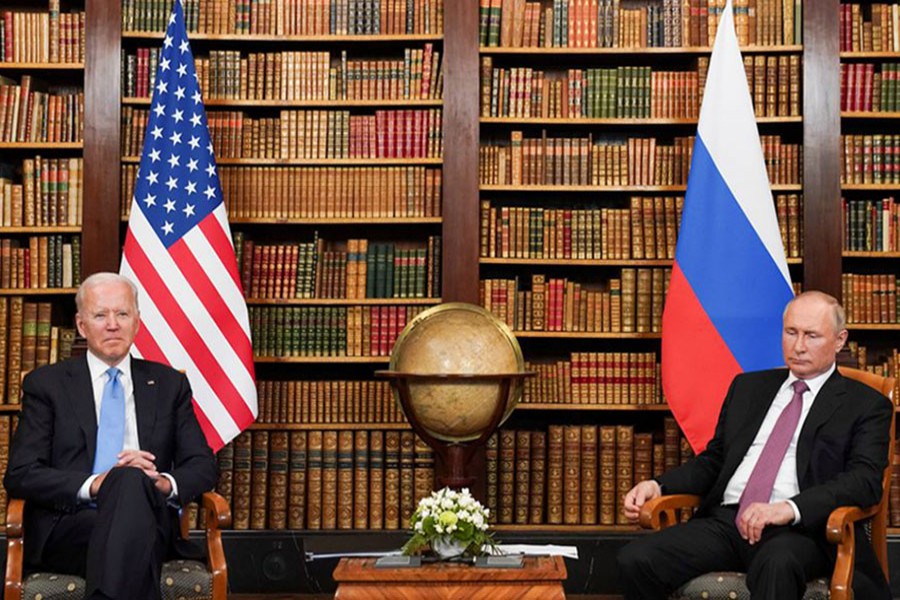 US President Joe Biden and his Russian counterpart Vladimir Putin will speak on Saturday as Western nations warned that a war in Ukraine could ignite at any moment.

Putin requested the telephone call between the leaders to take place on Monday, a White House official said, but Biden wanted to conduct it sooner as Washington detailed increasingly vivid accounts of a possible attack on Ukraine, reports Reuters.

Australia and New Zealand on Saturday joined the countries urging their citizens to leave Ukraine, after Washington said a Russian invasion, including a possible air assault, could occur anytime.

Moscow has repeatedly disputed Washington's version of events, saying it has massed more than 100,000 troops near the Ukrainian border to maintain its own security against aggression by NATO allies.

Putin, jostling for influence in post-Cold War Europe, is seeking security guarantees from Biden to block Kyiv's entry into NATO and missile deployments near Russia's borders.

Washington regards many of the proposals as non-starters but has pushed the Kremlin to discuss them jointly with Washington and its European allies.

Still, Biden, who will join the weekend call from the mountainside presidential retreat in Camp David, Maryland, has long believed that one-on-one engagement with Putin may be the best chance at a resolution.

Two calls in December between Biden and Putin produced no breakthroughs but set the stage for diplomacy between their aides. The two leaders have not spoken since, and diplomats from both sides have struggled to find common ground. Four-way talks in Berlin between Russia, Ukraine, Germany and France on Thursday made no progress.

US intelligence believes a rapid assault on Kyiv is possible and that Putin could order an invasion before the Winter Olympics end on February 20, Biden's national security adviser Jake Sullivan told reporters on Friday, adding it remains unclear whether such a command has been given.

He said they had gathered sufficient troops near the border to invade the country and that they may initiate an aerial bombing. The United States, Britain, Australia, and other allies have warned their citizens to leave Ukraine.

"The risk is now high enough and the threat is now immediate enough," said Sullivan.

Ukrainian officials have tried to tamp down Washington's assessment that an invasion could be imminent.

Nonetheless, Washington planned to send 3,000 extra troops to Poland, Ukraine's western neighbour, in coming days to try and help reassure NATO allies, four US officials told Reuters. They are in addition to 8,500 already on alert for deployment to Europe if needed.

Ahead of the talks with Putin, Biden spoke about the crisis with the leaders of Britain, Canada, France, Germany, Poland and Romania, as well as the heads of NATO and the EU. US Secretary of State Antony Blinken also spoke with Ukraine's foreign minister, Dmytro Kuleba.

"Our support for Ukraine's sovereignty and territorial integrity is unwavering," Blinken said after the call on Friday.

Washington also expressed concern that Russia and China were cooperating at the highest level, with a senior administration official saying on Saturday the two were "working to undermine us."

A partnership agreement between Moscow and Beijing shows they are in "fundamental alignment" that is growing closer, and a meeting between Putin and China's President Xi Jinping shows Beijing sees Moscow's moves regarding Ukraine as "legitimate," the official told reporters accompanying Blinken on a flight from Australia to Fiji.