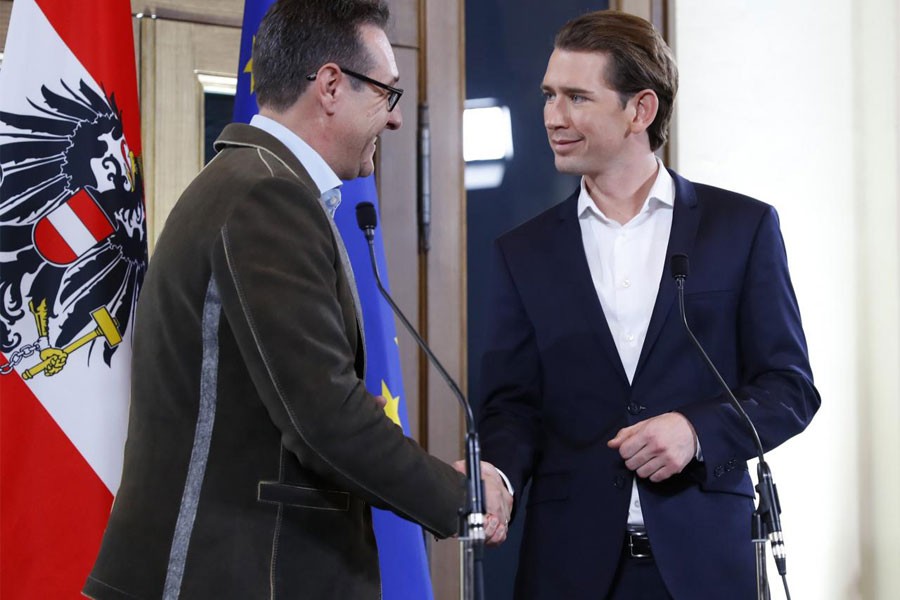 Head of the Freedom Party (FPOe) Heinz-Christian Strache (L) and head of the People's Party (OeVP) Sebastian Kurz shake hands at the end of a news conference in Vienna, Austria, December 15, 2017. (Reuters)

Austria's conservative People's Party has agreed a coalition with the far-right Freedom Party.

The deal comes two months after a parliamentary election which the People's Party won but without an overall majority.

At just 31, the People's Party's Sebastian Kurz is set to become the world's youngest head of government, says a BBC report.

If the coalition is ratified, Austria would become the only western European state with a governing far-right party.

The parties previously governed the central European country together between 2000 and 2005.

The two leaders gave no details about the government's programme. They said they would first inform Austria's President Alexander Van der Bellen and their respective parties on Saturday.

A 15 October election in Austria failed to yield a conclusive result.

The campaign was dominated by Europe's migration crisis, something the anti-immigration Freedom Party has long campaigned about.

Kurz appealed to conservative and right-wing voters with pledges to shut down migrant routes to Europe, cap benefit payments to refugees, and bar immigrants from receiving benefits until they have lived in Austria for five years.

The Freedom Party accused Kurz of stealing their policies. Their candidate, Heinz-Christian Strache, branded him an "imposter".

Following his party's victory, Kurz said: "It is time for change in this country. Today is a strong order for us, to change this country, and I say thank you to you all who made this possible."

Resurgent right-wing populist groups have been promoting anti-immigration and Eurosceptic agendas across much of the EU. Unlike the Freedom Party, they have struggled to convert ballot box success into real power.

Elsewhere, the Dutch anti-immigration Freedom party of Geert Wilders was defeated by liberal leader Mark Rutte. In Germany, the nationalist and populist right of Alternative for Germany (AfD) gained seats in the national parliament, where it is now third biggest party, but it is not in the frame for coalition talks.

So a far-right party coming into power in Austria is an exception in Europe.