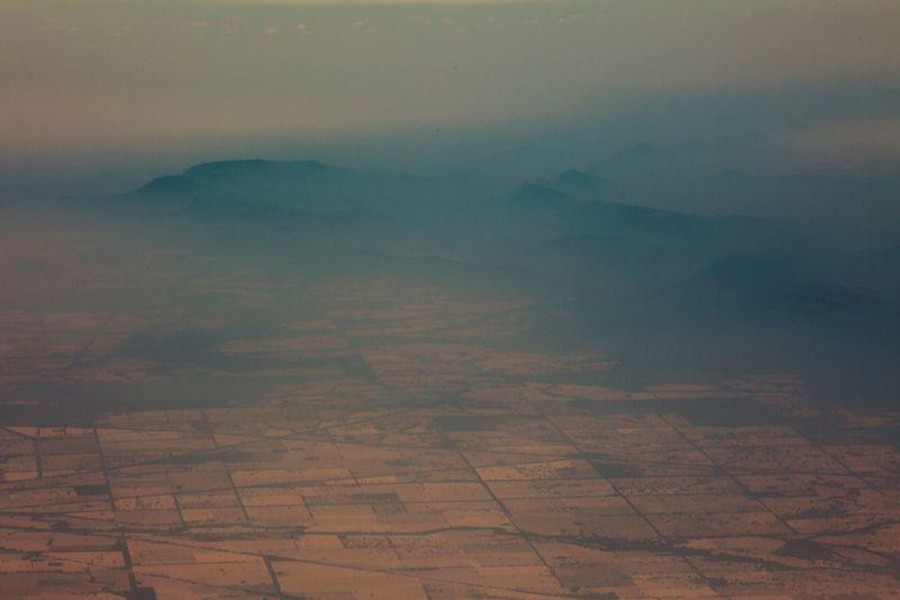 Smoke and haze over mountains are seen from a No 11 Squadron P-8A Poseidon conducting damage assessment and surveillance in the bushfire-affected area near Cooma, New South Wales, Australia on January 7, 2020 — Australian Department of Defence/Handout via REUTERS

A disaster notice in Victoria state, already in place for the past week, was extended by two days and people in danger zones were told to leave. In neighbouring New South Wales state, authorities told residents to prepare for worsening weather conditions on Friday.

“These fires are absolutely still moving, still growing in our landscape and they pose significant risk to communities,” Victoria Emergency Services Minister Lisa Neville said in a televised briefing.

Twenty-six people have died, thousands have been made homeless, and thousands of others have had to evacuate repeatedly as the monster fires have scorched through more than 10.3 million hectares (25.5 million acres) of land, an area the size of South Korea.

Authorities have warned that the summer fire season, spurred by high temperatures, strong winds, and a three-year drought that has left bushland vulnerable, will continue until the country experiences solid rainfall.

The national weather agency confirmed fears there was no sign of that happening in the next few months as it released its annual report, which also showed that 2019 was Australia’s hottest and driest year on record.

Many towns were without power and telecommunications and some were running low on drinking water supplies. Smoke has blanketed Sydney, Melbourne, and Canberra, and drifted as far as South America.

“I listened to the advice that if you don’t need to stay, then don’t,” said David Gatrell, 72, laying out a tent next to about 20 vehicles at a sports ground in Merimbula, a coastal town about 60 kilometres (37 miles) from his home at Towamba.

“There are four roads out of the village and three are blocked,” Gatrell told Reuters. “There’s only one way out and I don’t want to take my chances.”

Parts of Kangaroo Island, a wildlife-rich tourist spot off the country’s southeast coast where Prime Minister Scott Morrison on Wednesday made a plea for foreign tourists not to be deterred by the fires, were again evacuated on Thursday. A third of the island has already been destroyed by fires.