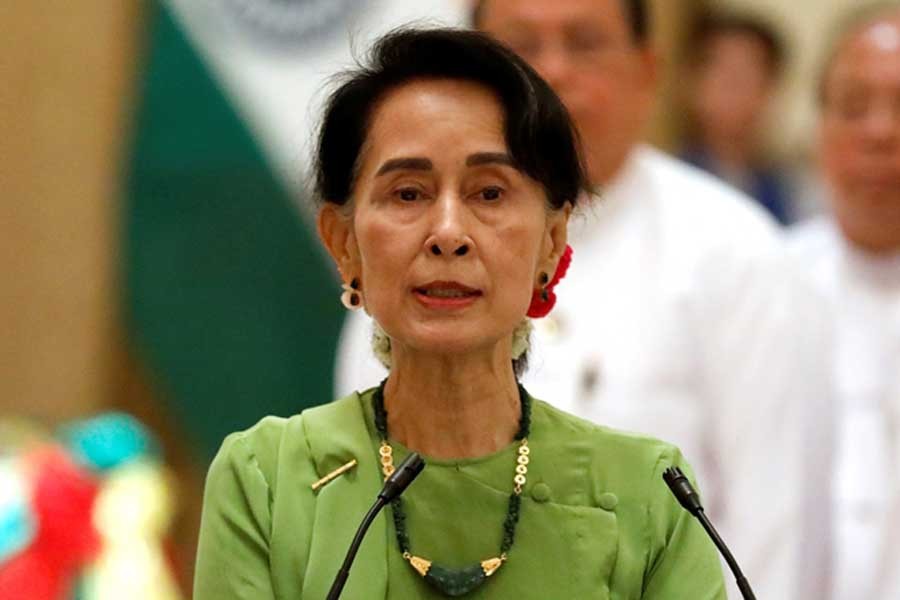 When Aung San Suu Kyi led the fight for democracy against Myanmar’s despotic military rulers two decades ago, she bristled at the collective reluctance of Southeast Asian governments to intervene in her nation’s plight.

In a newspaper editorial published in 1999, the former opposition leader slammed the 10-member Association of Southeast Asian Nations, saying its “policy of non-interference is just an excuse for not helping.”

“In this day and age,” she wrote in an editorial in Thailand’s The Nation newspaper on July 13 of that year, “you cannot avoid interference in the matters of other countries.”

Today, Suu Kyi leads Myanmar. And when she attends the ASEAN summit in Manila on Monday, she’s likely to be counting on the bloc to keep silent while her government engages in a crackdown on Rohingya Muslims using tactics the U.N. has described as ethnic cleansing to force them to leave the Buddhist-majority country.

It’s unclear whether the crisis will be on ASEAN’s official agenda, although Malaysia and Indonesia are likely to bring it up in talks on the meeting’s sidelines. Bangladesh, where more than 600,000 Rohingya have arrived since late August, is not part of ASEAN.

But little is expected to be done.

“ASEAN summits are not designed to actually construct policy responses to major human rights issues that affect the whole region,” said David Mathieson, a former human rights researcher who is now an independent analyst based in Myanmar. “Right now, Suu Kyi’s government is benefiting from ASEAN’s culture of inaction.”

Myanmar has long denied them citizenship and most people insist the Rohingya are illegal immigrants though they’ve lived in Myanmar for generations.

Suu Kyi was awarded the 1991 Nobel Peace Prize for her “non-violent struggle for democracy and human rights,” in the words of the Nobel committee, but has been reluctant to defend the Rohingya. In a September speech, Suu Kyi asked for patience from the international community and suggested the refugees were partly responsible for the crisis. She also tried to play down the gravity of the exodus, saying more than half of the Rohingya villages in Myanmar had not been destroyed.

Though Suu Kyi has been the de facto head of Myanmar’s civilian government since her party swept elections in 2015, she is limited in her control of the country by a constitution written by the military junta that ruled Myanmar for decades. The military is in charge of the operations in northern Rakhine, and ending them is not up to Suu Kyi.

Still, her government has staunchly defended the army’s actions.

When the U.N. Security Council last week called for Myanmar to “end the excessive military force and intercommunal violence that had devastated the Rohingya community,” Suu Kyi’s office responded that it regretted the council’s statement.

In an apparent reference to China, which has backed Myanmar, the government praised Security Council members who “upheld the principle of non-interference in the internal affairs of sovereign countries.”

Non-interference has long been a bedrock of ASEAN, which celebrates its 50th anniversary this year.

Myanmar presidential spokesman Zaw Htay said he did not know what would be discussed at the summit this week, so “we can’t say how we are going to respond to it.”

Chandra Widya Yudha, director of the ASEAN Political and Security Cooperation at Indonesia’s Foreign Ministry, told The Associated Press that his government would address the Rohingya crisis at the meeting. “We cannot keep silent because we have to help them,” Yudha said.

Malaysia in particular has been critical of Myanmar’s disproportionate use of force. Earlier this month, the predominantly Muslim country dissociated itself from an ASEAN statement expressing concern over the crisis because it said the statement misrepresented the reality of the situation, omitted reference to Rohingya Muslims as one of the affected communities and was not based on consensus.

Khin Zaw Win, a Yangon-based political analyst, said that both Myanmar’s previous military junta and Suu Kyi’s government have benefited from ASEAN’s reticence, but that the bloc should “take a firmer position” on the Rohingya issue.

“It has to be taken up if ASEAN is to remain credible,” he said.

Writing in The Nation in 1999, Suu Kyi said that when ASEAN invokes the principle of non-interference, it does so “not with a clear conscience.”

“They are afraid that there may be some aspects of their countries that might invite criticism,” she said. “Our position is that if they have problems that invite legitimate criticism, let there be criticism. If not, they have nothing to fear.”