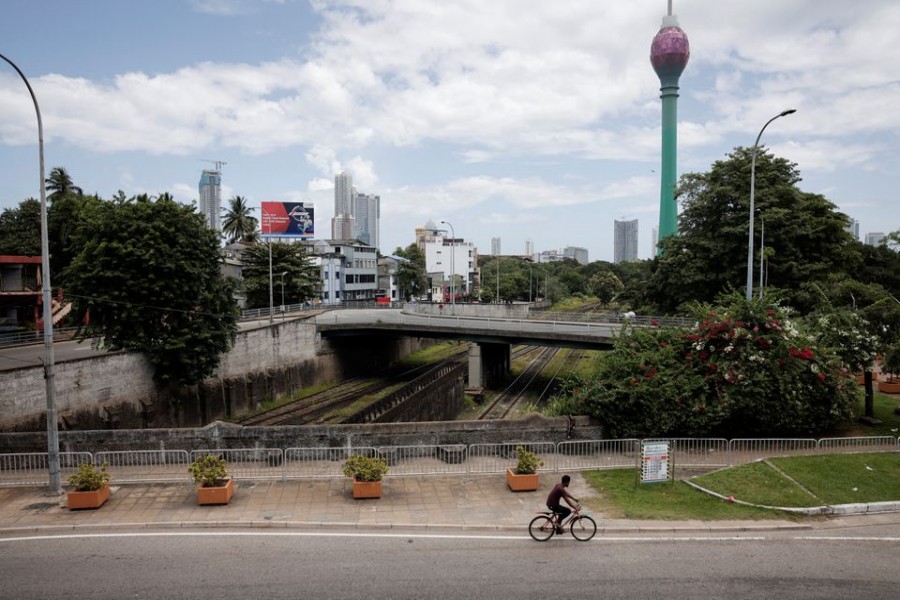 A man rides a cycle along main road as less vehicles are on the road due to fuel shortage, amid the country's economic crisis, in Colombo, Sri Lanka, June 28, 2022. REUTERS/Dinuka Liyanawatte

A Sri Lankan government minister was in Qatar on Tuesday and another will travel to Russia at the weekend in search of energy deals to alleviate a severe fuel shortage that is crippling the economy of the island nation and forcing many schools to close, news agency Reuters reported.

The South Asian country of 22 million people is in the grip of a financial crisis that has left currency reserves perilously low, making imports of essential goods including food, medicine, petrol and diesel increasingly difficult.

Protests, some of them violent, have erupted in recent months and key ministers have resigned, leaving President Gotabaya Rajapaksa and Prime Minister Ranil Wickremesinghe fighting to stabilise the nation.

In a step aimed at getting more fuel into Sri Lanka, the power and energy minister said on Tuesday that the duopoly controlling imports would end and companies from oil-producing countries would be allowed to enter the market.

The cabinet decision came as the minister, Kanchana Wijesekera, headed to Qatar and a ministerial colleague was due to arrive in Russia on Sunday.

The government is also in talks with the International Monetary Fund (IMF) over a loan package, and it has invited key partners India, China and Japan to a donor conference to add to the billions of dollars in assistance already promised.

Data released on Tuesday underlined the damage the crisis has done to the economy.

Sri Lanka's economy contracted by 1.6 per cent in January to March over the same period in 2021, and analysts said higher inflation and political uncertainty could lead to up to a 5.0 per cent contraction in the second quarter.

The turmoil has resulted from the confluence of the COVID-19 pandemic ravaging the country's lucrative tourism industry and foreign workers' remittances, ill-timed tax cuts by Rajapaksa that drained government coffers and rising oil prices.

The government closed urban schools for about two weeks from Tuesday and allowed fuel supplies only to services deemed essential like health, trains and buses as stocks would only last only a week or so based on regular demand. A government spokesman said on Monday that people have been encouraged to work from home.

Ordinary people are increasingly looking for opportunities to leave the country and find a new life abroad.

Demand for passports has surged, and the navy said it had detained 47 people, including seven children, off the west coast late on Monday as they attempted to illegally migrate to Australia.

More than 120 people have been stopped in the past two weeks while trying to leave the country in small boats.

Wijesekera flew to Qatar late on Monday night while Education Minister Susil Premajayanth is due to arrive in Russia on July 3.

Wijesekera hopes to find a long-term fuel supplier in Qatar who is "willing to work with Sri Lanka's foreign exchange and other challenges", said a ministry official, who declined to be identified as he is not authorised to speak to media.

"Maintaining robust bilateral relations between our two countries, whilst focusing on developing trading opportunities was discussed extensively at this meeting," Rajapaksa said.

Traffic was light on Tuesday on the streets of the main city Colombo, with schools shut and most public and private sector employees working from home.

But buses and trains were running and shops were open for groceries and other essentials.

Sri Lanka is facing the possibility of running out of staples, especially rice, partly due to a fall in production because of a ban on chemical fertiliser last year which has now been reversed.

Wickremesinghe told parliament this month that Sri Lanka needed about $5 billion to pay for imports including fuel, fertiliser and food.