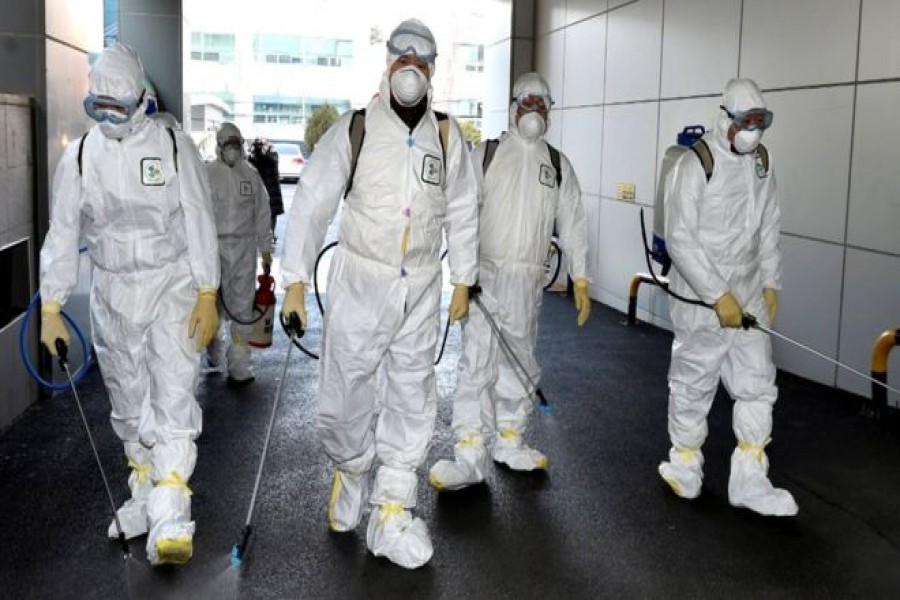 South Korea has stepped up measures to contain the spread of the new coronavirus, as confirmed infections rose sharply for a second day, reports BBC.

The two southern cities of Daegu and Cheongdo have been declared "special care zones".

The country has also locked down its military after several soldiers tested positive.

On Friday, South Korea reported 52 new confirmations after a rise of 53 on Thursday.

The country now has a total of 156 cases making it the largest cluster outside mainland China and the cruise ship docked off Japan.

From the 52 new cases reported on Friday, 41 are in Daegu, a city 300km southeast of the capital Seoul, and 39 of those are from a cluster involving a religious sect.

Authorities confirmed the country's first death from the virus on Thursday, in the neighbouring city Cheongdo.

The man was was a long term patient at a mental health facility, where alongside him another 14 patients have also tested positive.

Officially named Sars-CoV-2, the new virus is thought to have originated in Hubei province in China. It causes pneumonia-like symptoms.

Both Daegu and Cheongdo cities have been designated "special care zones" and the government promised swift measures to prevent further spread of the virus.

"It is urgent to find people who have contacted infected people and cure patients," Prime Minister Chung said according to news agency Yonhap.

He said the government was readying resources like sickbeds, medical equipment and health workers and warned the virus was now spreading locally.

"The government has so far focused on curbing infections coming from outside the country. From now on, the government will further prioritise preventing the virus from spreading locally."

Health Minister Park Neung-hoo said authorities would allow hospitals to isolate respiratory patients from others in an effort to prevent any spread within medical institutions.

He also said that all pneumonia patients in Daegu hospitals would be checked for the virus.

South Korea's defence ministry has ordered a lock down for all personnel and cancelled all leave after several soldiers tested positive for the new virus.

The city's biggest cluster appears to be at a branch of a religious sect which calls itself the Shincheonji Church of Jesus, Temple of the Tabernacle of the Testimony.

South Korean health officials believe these infections are linked to a 61-year-old woman who tested positive for the virus earlier this week.

The Shincheonji, which has been accused of being a cult, said it had now shut down its Daegu branch and that services in other regions would be held online or individually at home.

Coronavirus death toll moves up to 37 in Pakistan