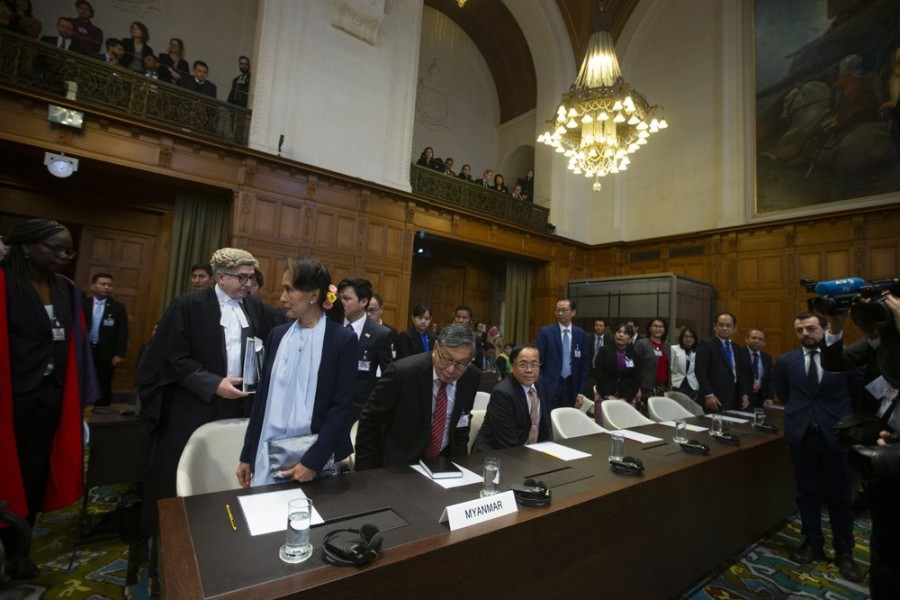 Myanmar's leader Aung San Suu Kyi, with blue scarf and purse, enters the court room prior to addressing judges of the International Court of Justice for the second day of three days of hearings in The Hague, Netherlands, Wednesday, Dec. 11, 2019. (AP Photo/Peter Dejong)

Rohingya refugees accused former Myanmar pro-democracy icon Aung San Suu Kyi of lying to the International Court of Justice in testimony Wednesday in which she denied that her country’s armed forces were guilty of genocide against the Muslim minority group.

Suu Kyi, who is now Myanmar’s leader, told the court that the exodus of hundreds of thousands of Rohingya Muslims to neighbouring Bangladesh was the unfortunate result of a battle with insurgents.

She denied that the army had killed civilians, raped women and torched houses in 2017. Critics describe the actions by the army as a deliberate campaign of ethnic cleansing and genocide that forced more than 700,000 Rohingya to flee.

“The world will judge their claim of no genocide with evidence,” said a Rohingya leader, Mohammed Mohibullah, who is chairman of the Arakan Rohingya Society for Peace and Human Rights.

“A thief never admits he is a thief, but justice can be delivered through evidence. The world has obtained evidence from us,” he said at the Kutupalong refugee camp in Bangladesh’s Cox’s Bazar district.

“Even if Suu Kyi lies, she won’t be spared. She will certainly face justice. The world should take steps against her,” he said.

“The military cordoned off people and killed them by opening fire, setting them ablaze — isn’t this genocide? Will this be justified if Syu Ki says so?” Kamal said.

“The world will not accept that. The whole world has seen the level of torture of us. It is still going on,” he said.

A legal team from Gambia, acting on behalf of the 57-country Organization of Islamic Cooperation, asked the International Court of Justice in The Hague to take “all measures within its power to prevent all acts that amount to or contribute to the crime of genocide” in Myanmar.

Gambia alleged that genocide was committed and is ongoing, the Associated Press reported.

Suu Kyi accused Gambia of providing a misleading and incomplete account of what happened in Myanmar’s Rakhine state in August 2017.

Her appearance at the court was striking in that she was defending the same military that kept her under house arrest for about 15 years.

She was awarded the 1991 Nobel Peace Prize in absentia for championing democracy and rights under Myanmar’s then-ruling junta.

Buddhist-majority Myanmar has consistently denied violating human rights and says military operations in Rakhine state, where most Rohingya lived, were justified in response to attacks on security posts by Rohingya insurgents.

A UN-established investigation earlier recommended the prosecution of Myanmar’s top military commanders on charges of genocide, war crimes and crimes against humanity for the crackdown on the Rohingya.

Earlier this year, the UN Independent International Fact-Finding Mission on Myanmar said rapes of Rohingya by Myanmar’s security forces were systemic and demonstrated the intent to commit genocide. It said in a report the discrimination that Myanmar practiced against the Rohingya in peacetime aggravated the sexual violence toward them during times of conflict.

Bangladesh and Myanmar have signed an agreement to start repatriation of Rohingya refugees from Bangladesh, but two attempts failed when no one came forward to return voluntarily, citing continuing security concerns in Myanmar.