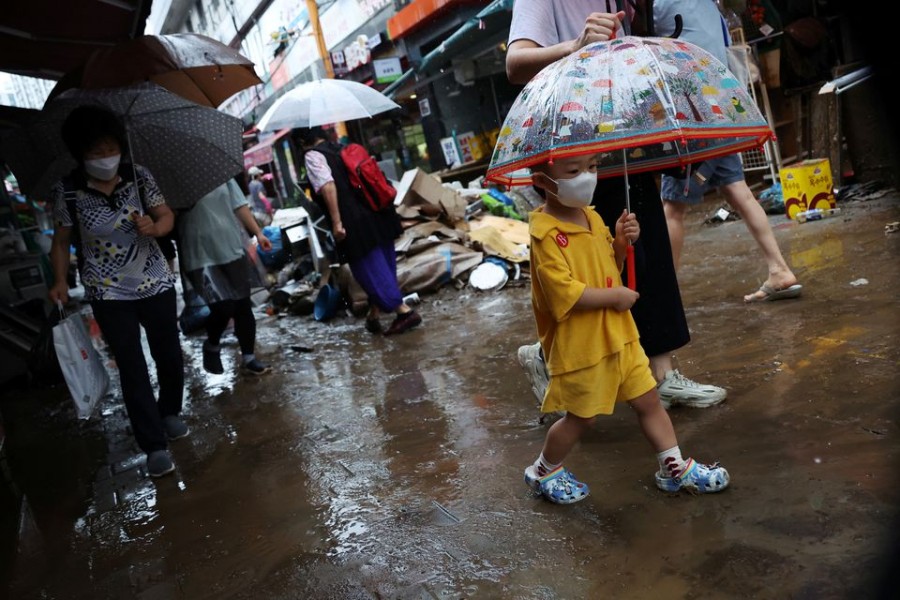 A boy using an umbrella makes his way through a road that was flooded after torrential rain at a traditional market in Seoul, South Korea, August 9, 2022. REUTERS/Kim Hong-Ji

At least seven people died in and around the South Korean capital of Seoul overnight, authorities said on Tuesday, after torrential rain knocked out power, caused slips and left roads and subways submerged.

The southern part of Seoul received more than 100mm (3.9 inches) of rain per hour on late Monday, with some part of the city having received 141.5mm of rain, the worst rainfall in decades, according to Korea Meteorological Administration (KMA).

The accumulated rainfall in Seoul since midnight Monday stood at 420mm as of 5 am Tuesday, with more rain forecast.

In the glitzy, highly concentrated Gangnam district, some buildings and storeswere flooded and were without power, while cars, buses and subway stations were submerged, leaving people stranded.

"I was near Gangnam station last night when the rainfall intensified, with thunder and lightning striking every 30 seconds," said Lee Dongha, a 27-year-old office worker in Seoul. "All of a sudden, buses, subway stations and streets were submerged, and that's when I quickly decided to book an accommodation as I didn't want to be left stranded, with nowhere to go."

At least five people died in Seoul and two others in the neighbouring Gyeonggi Province by early Tuesday, the Central Disaster and Safety Countermeasures Headquarters said. Four died after being trapped in flooded buildings, one was believed to have been electrocuted, one person was found under the wreckage of a bus stop, and another died in a landslide, it said.

At least nine people were injured, while six were missing.

The headquarters raised the crisis alert to the highest and requested organisations adjust their working hours.

The KMA issued heavy rain warnings across the capital and the metropolitan area of 26 million as well parts of Gangwon and Chungcheong Province.

The KMA expects heavy rainfall for the central part of the country to continue through at least Wednesday.

While South Korea often experiences heavy rains in summer, "such sharp increase in precipitation and frequent torrential rains cannot be explained without the big trend of climate change," a KMA official, who spoke in condition of anonymity, told Reuters. "This phenomenon is seen occurring more often due to climate change that has resulted in a prolonged summer."