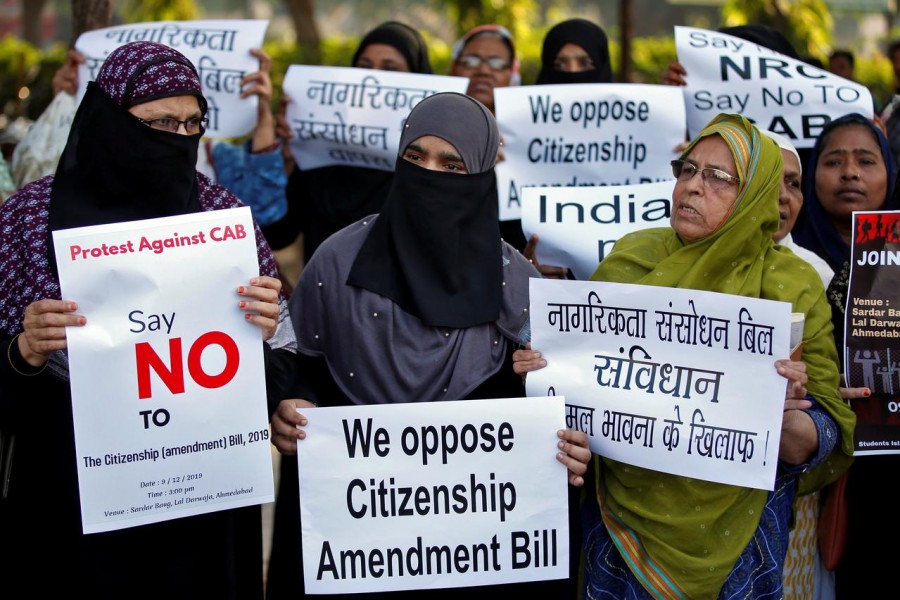 Demonstrators display placards during a protest against the Citizenship Amendment Bill, a bill that seeks to give citizenship to religious minorities persecuted in neighbouring Muslim countries, in Ahmedabad, India, December 9, 2019. Reuters

Hundreds of protesters took to the streets in India on Monday as Prime Minister Narendra Modi’s government offered a controversial bill in parliament that would give citizenship to non-Muslim minorities from three neighbouring countries.

Home Minister Amit Shah introduced the Citizenship Amendment Bill (CAB) in India’s lower house amid raucous debate. Opposition parties stood against the proposed law that would, for the first time, create a legal pathway to grant Indian nationality on the basis of religion.

The bill was originally introduced in 2016 during the Modi government’s first term but lapsed after protests and an alliance partner’s withdrawal. It proposes to grant Indian citizenship to non-Muslims who came to India from Bangladesh, Pakistan and Afghanistan before 2015.

Shah and Modi’s ruling Bharatiya Janata Party, which had included the CAB as part of its manifesto in the last general election, insist that it is necessary.

“In these three countries, Hindus, Buddhists, Sikhs, Jains, Parsis and Christians, followers of these six religions have been tormented,” Shah said, before the bill was tabled after a vote.

But protesters returned to the streets in Assam - one of the states that had previously opposed the bill - and blocked roads, burnt tyres and painted walls with slogans against the new proposal.

“We will fight and oppose the bill till the last drop of our blood,” All Assam Students’ Union adviser Samujjal Bhattacharya told Reuters, underlining the region’s resistance against migrants amid fears that tens of thousands of settlers from neighbouring Bangladesh would gain citizenship.

In Modi’s home state of Gujarat and the city of Kolkata, hundreds of people staged protests and marched against the proposed law.

In a statement issued on Monday, a group of more than 1,000 Indian scientists and scholars also called for the immediate withdrawal of the bill.

“We fear, in particular, that the careful exclusion of Muslims from the ambit of the bill will greatly strain the pluralistic fabric of the country,” the statement said.

After going through the lower house of parliament, where the BJP has a majority, the bill has to be okayed by the upper house, where the ruling party does not have enough votes for passage. Any bill needs to be ratified by both houses of India’s parliament to become law.

“Please save this country from this law and save the home minister,” Asaduddin Owaisi, an opposition MP from the All India Majlis-e-Ittehadul Muslimeen party, told parliament.

N Korea fires more missiles than ever amid coronavirus outbreak

India to use some train coaches as coronavirus isolation wards

In Iraq, coronavirus terrifies even doctors