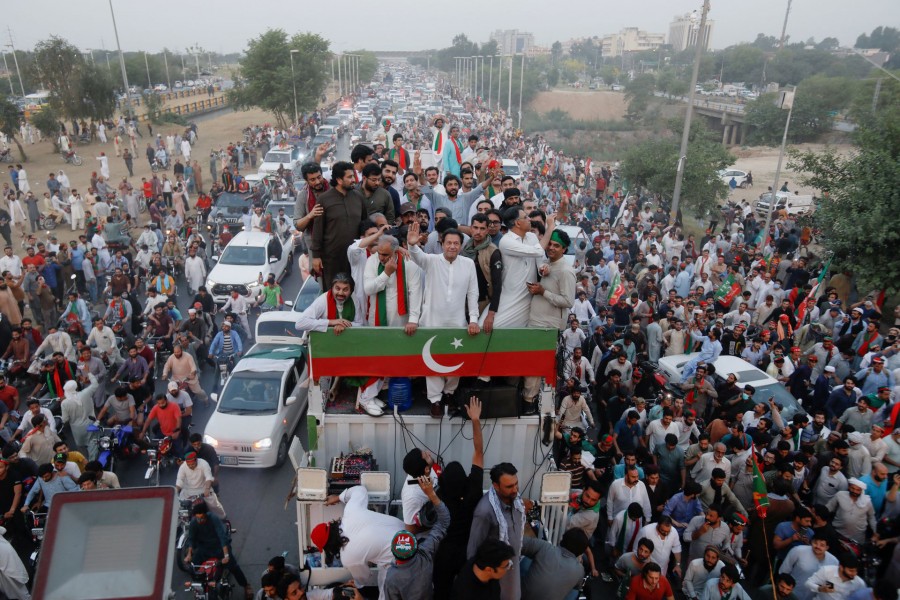 Ousted Pakistani Prime Minister Imran Khan gestures as he travels on a vehicle to lead a protest march in Islamabad, Pakistan on May 26, 2022 — Reuters photo

Pakistan's ousted prime minister Imran Khan disbanded a protest march by supporters on Thursday after clashes with police outside parliament the previous evening, but he warned that they would return unless an election was called within six days, reports Reuters.

Khan has said that the confidence vote that toppled him and ushered in the coalition government led by Prime Minister Shabhaz Sharif last month was the result of a US conspiracy, and he is demanding a fresh election to show he has national support.

"I'm giving you six days. You announce elections in six days," Khan said from atop a truck after he and thousands of his supporters reached Islamabad, adding that the parliament should be dissolved to hold the fresh elections in June.

He warned the government that he will march on the capital again if it didn't meet the demands.

Khan had rallied thousands of supporters to Islamabad, with plans to occupy sensitive part of the capital until Sharif gave in to his demand for new polls.

The Supreme Court had ordered the government late Wednesday night to remove all the blockades police had placed at entry and exit routes into the city, and to give Khan's supporters a specific open place to hold their rally.

The protesters didn't follow the court orders, however, and hundreds reached the heart of the capital, where they fought running battles with police over several hours before Khan and main body of the rally entered the city.

Police fired tear gas and baton charged the vanguard of the protest march, and detained hundreds of protesters, who had set fire to trees, vehicles, shops, and a bus station, as they advanced up the main thoroughfare of the capital leading to parliament.

At least 18 police and paramilitary troops were wounded, said Information Minister Marriyum Aurangzeb after dozens of the protesters breached the last security defence line to reach just outside the parliament.

The clashes also spread to multiple cities in Punjab province and the southern port city of Karachi.

The government has said Khan's march is illegal and accuses him of seeking to bring protesters to Islamabad with "evil intentions".

Police began removing the shipping containers used to block the main roads into and out of the capital on Thursday.

And barriers had also been placed across entry and exit points to all major cities in Punjab, and across the Grant Trunk Road, which connects the heartland province and northwest Pakistan.