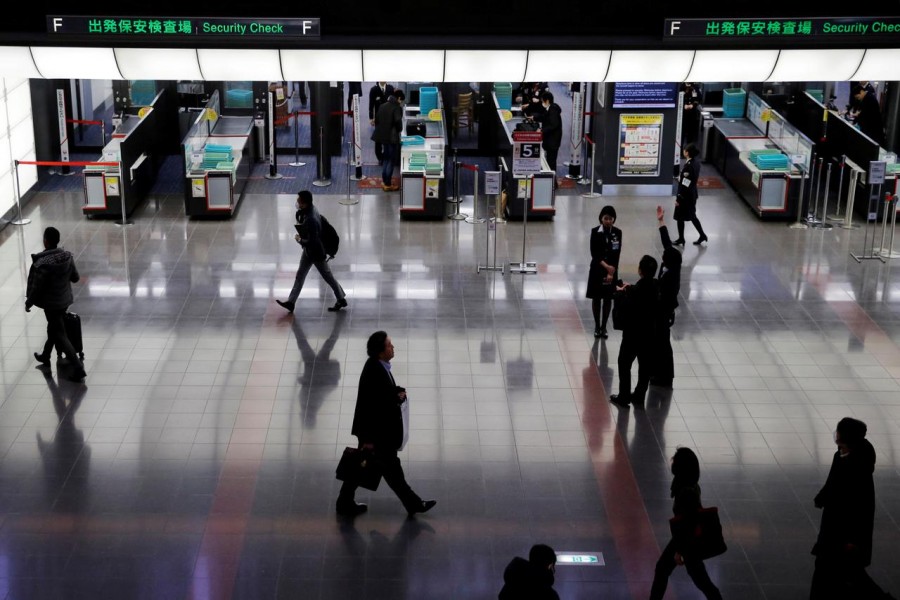 Passengers are seen in front of security check at the Tokyo International Airport, commonly known as Haneda Airport, in Tokyo, Japan on January 10, 2018 — Reuters/Files

Japan is considering re-opening its borders to travellers from selected countries which have low levels of coronavirus infections, as it begins to ease restrictions put in place earlier this year to control the outbreak.

As schools, cinemas, sports clubs and department stores reopened in the nation’s capital Tokyo on Monday, media have reported that the government is also planning to allow travellers from Thailand, Vietnam, Australia and New Zealand into the country in the coming months.

There was no immediate comment from the foreign ministry.

Around 17,000 coronavirus cases have been confirmed in Japan as of early Monday, with roughly 900 deaths.

Since February, Japan has banned entry by foreigners to limit the spread of the virus from overseas visitors.

The government is considering allowing business travellers from the four countries to enter if they test negative for COVID-19 in two separate tests conducted upon departure from their home country and arrival in Japan, the Asahi Shimbun reported, citing unnamed sources.

Once permitted into the country, visitors’ movements would be restricted to areas including place of stay, company offices and factories, the newspaper said, adding that use of public transportation would be banned.

Along with Japan, Thailand, Vietnam, Australia and New Zealand are members of the Trans-Pacific Partnership (TPP-11), and have strong trade ties with Japan.

Southeast Asia accounts for just 4.4 per cent of global COVID-19 infections, according to the World Health Organisation, much lower than the Americas or Europe, which each account for roughly 40 per cent.

Vietnamese youth are the fastest-growing group of foreign workers in Japan. Many arrive as part of a technical trainee programme set up by the Japanese government, which is widely seen as a way to bring in blue-collar labour in immigration-shy Japan.

Touching Kaaba to be banned during this year’s Hajj