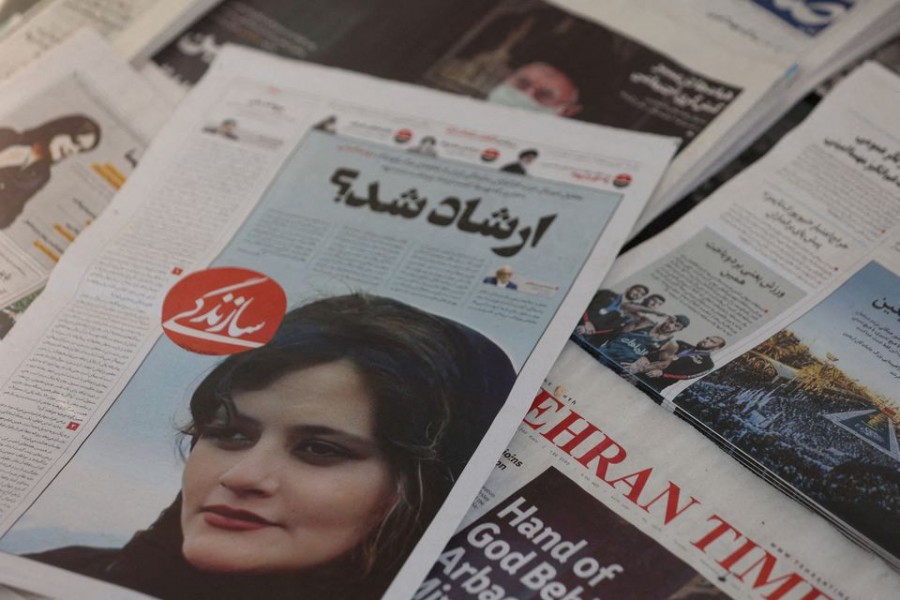 Iranian lawmakers chanted "thank you, thank you, police" during a parliament session on Sunday, amid weeks of anti-government protests across Iran following the death of a young woman in police custody, Iranian state media reported.

The protests, sparked by the death of 22-year-old Mahsa Amini from Iranian Kurdistan, have spiralled into the biggest show of opposition to Iran's authorities in years, with many calling for the end of more than four decades of Islamic clerical rule.

Pledging allegiance to the Islamic Republic's top authority Supreme Leader Ayatollah Ali Khamenei, the lawmakers chanted: "The blood in our veins is a gift to our leader", a video shared on Iranian state media showed.

Khamenei has not commented on the protests, which began at Amini's funeral on Sept. 17 and quickly spread to Iran's 31 provinces, with all layers of society, including ethnic and religious minorities, taking part.

Despite the growing death toll and a fierce crackdown by security forces using tear gas, clubs, and in some cases, live ammunition, Iranians continue to protest.

Videos on social media showed demonstrations in several cities such as Kermanshah, Shiraz and Mashhad on Sunday, with participants chanting "independence, freedom, death to Khamenei".

Activist Twitter account 1500tasvir, which has more than 160,000 followers, posted a video of protesters in the central city of Isfahan calling for a nationwide strike and setting up a road block to bring truck drivers to their ranks.

The videos could not be verified.

Amini was arrested in Tehran for "unsuitable attire" by the morality police who enforce the Islamic Republic's strict dress code and died in hospital after falling into a coma.

Iran's police authorities say Amini died of a heart attack and deny claims by her family that she was beaten to death in custody.

The country's hardline President Ebrahim Raisi, who ordered an investigation into Amini's death, said last week that forensics would present a report in "coming days".

Amnesty International said in a statement on Friday that the government crackdown on demonstrations has so far led to the death of at least 52 people, with hundreds injured and thousands arrested. Iranian authorities say many members of the security forces have been killed by "rioters and thugs backed by foreign foes".

Amini's death and the crackdown have drawn international criticism of Iran's rulers, which accuse the United States and some European countries of exploiting the unrest to try to destabilise the Islamic Republic.

Iran said last week it had arrested nine people from Germany, Poland, Italy, France, the Netherlands, Sweden and other countries for their role in the protests.