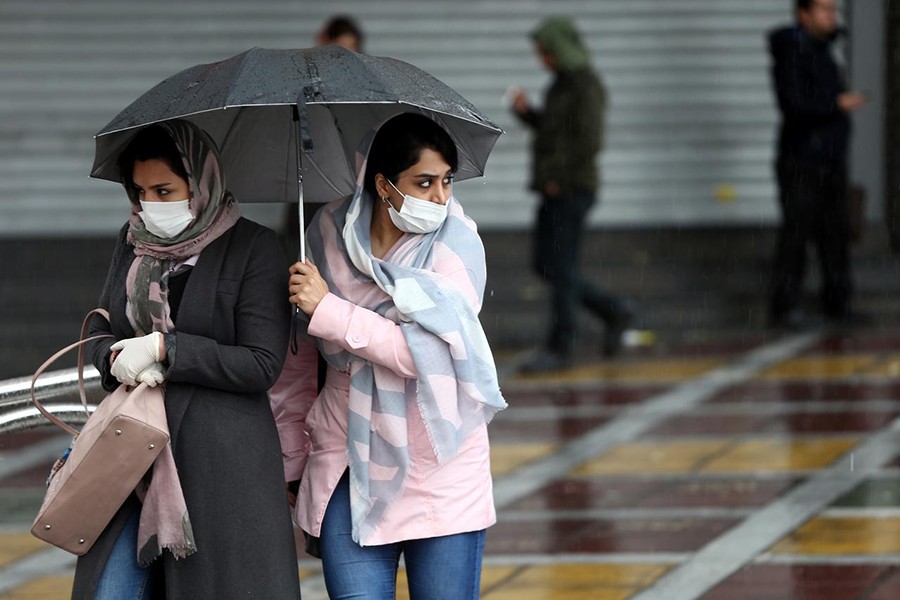 Iranian women wear protective masks to prevent contracting coronavirus, as they walk in the street in Tehran, Iran on February 25, 2020 — West Asia News Agency via REUTERS

Iran said on Thursday its death toll from coronavirus had risen to 26, by far the highest number outside China, and the total number of infected people now stood at 245, including several senior officials.

The outbreak prompted authorities to call off Friday prayers in the capitals of 23 of Iran’s 31 provinces, including Tehran and the Shi’ite Muslim holy cities of Qom and Mashhad as well as some other infected areas, state TV reported.

Those infected officials include Masoumeh Ebtekar, the vice president for women and family affairs, and Deputy Health Minister Iraj Harirchi. Ebtekar’s case was said to be mild and she had not been admitted to hospital.

“In the last 24 hours, we have had 106 (new) confirmed cases... The death toll has reached 26,” Health Ministry spokesman Kianush Jahanpur told state TV, calling on Iranians to avoid “unnecessary trips inside the country”.

Iran has also imposed some restrictions on access to shrines in Qom and Mashhad, Health Minister Saeed Namaki told state TV, adding that visitors to the holy sites should “pray and leave”. “Gatherings are not allowed inside the shrines,” he said.

Iranian authorities said hundreds of people initially suspected of having the virus had tested negative and been discharged from hospital.

Authorities including President Hassan Rouhani said on Wednesday that Iran had no plans to quarantine any cities or districts, despite the sharp rise in numbers in a short time.

The government extended the closure of universities and cinemas and a temporary ban on cultural, sports events, and conferences for another week.

The death rate among confirmed cases of the virus has been running at around 10 per cent in Iran compared to around 3 per cent elsewhere. Iran only announced its first infections and deaths from the coronavirus on February 19.

Mike Ryan, head of the World Health Organization’s emergencies programme, said in Geneva that “the most likely factor is obviously this disease came unseen and undetected into Iran; the extent of infection may be broader than we think”.

Ryan said it appeared that, so far, more severe cases had been detected, but that more milder cases would be detected in future: “I don’t suspect it has anything to do with clinical care, more to do with surveillance.”

Iran’s Foreign Ministry said “some 20,000 coronavirus test kits and some other material” would be delivered to the country from China by Iran’s Mahan Air flight on Friday.