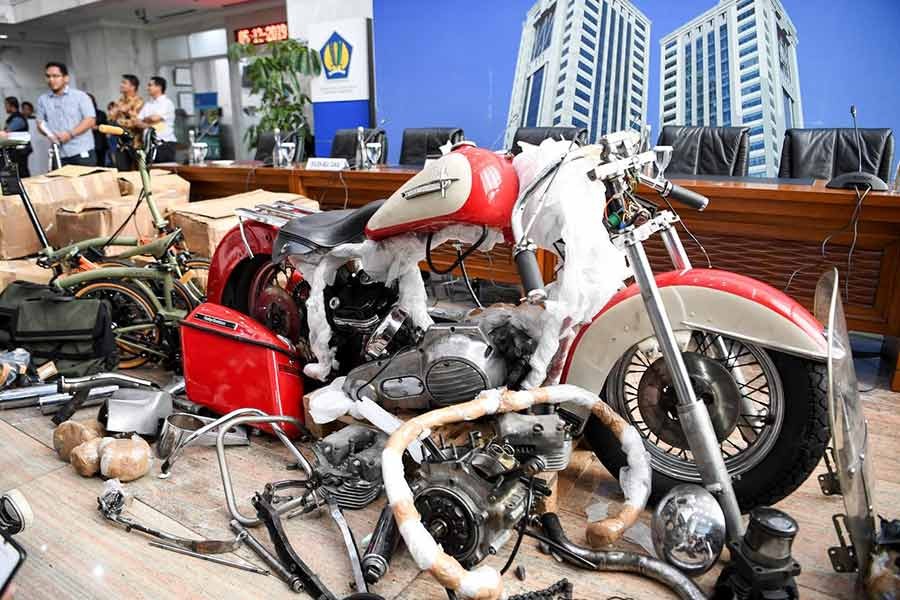 Evidences of Harley Davidson and Brompton bicycle, which were brought into Indonesia on a new Airbus plane of PT Garuda Indonesia, are pictured before a news conference at Indonesian Finance Ministry in Jakarta, Indonesia, on Thursday. -Reuters Photo

The boss of Indonesia's national airline will be dismissed on suspicion of smuggling a motorbike into the country on a new plane.

The chief executive, Ari Askhara, and the airline did not immediately respond to requests for comment on the allegations by Thohir that had Askhara tried to evade paying tax on a Harley Davidson motorcycle worth 800 million rupiah ($57,000).

Thohir told a news conference the motorbike was brought into Indonesia on an Airbus plane from France. Askhara, who took up his role in September 2018, had ordered a Harley Davidson motorbike last year and bought it in April 2019, he said.

The payment was made through a Garuda finance manager based in Amsterdam, who also assisted in delivery of the motorbike, Thohir said.

“This process was done completely within a state-owned company, not only by an individual,” the minister said.

He did not say when Askhara would be dismissed but that the ministry would investigate whether other Garuda personnel were involved.

Two high-end bicycles, which Thohir said were not declared to customs and were also found on the jet, were displayed alongside the motorbike at the news conference.

Finance Minister Sri Mulyani Indrawati told the news conference the state could lose between 532 million rupiah to 1.5 billion rupiah in tax revenue because of the incident.

Other Garuda officials onboard the plane who initially said they owned the items, could also face charges if they were found to have made false statements, she said.

Garuda has been struggling to improve its profitability. In June, Indonesia’s financial regulator ordered Garuda to “fix and restate” its 2018 financial results over accounting errors.

In April, two of Garuda’s largest private shareholders questioned the airline’s 2018 results and alleged it misrepresented a $240 million financial transaction. The airline rejected the allegation.