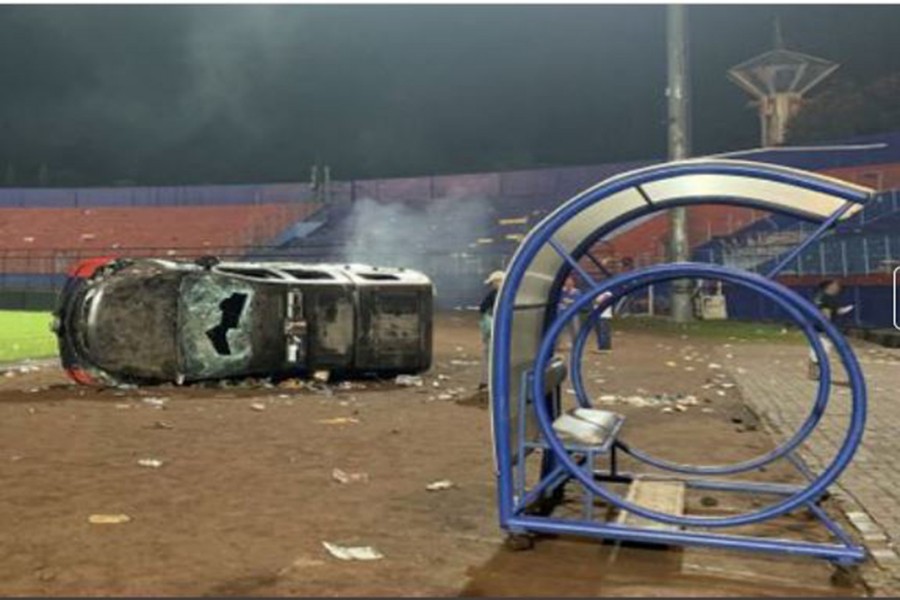 Indonesia on Monday set up an independent team to investigate a stampede at a soccer stadium that killed 125 people, including 32 children, as the country's human rights commission questioned the police use of tear gas, reports Reuters.

Panic-stricken spectators were crushed as they tried to escape the overpacked stadium in Malang, East Java, on Saturday after police fired tear gas to disperse fans from the losing home side who ran onto the pitch at the end of the domestic league match.

At least 32 of the victims were children aged between 3 and 17 years, Nahar, an official at the women's empowerment and child protection ministry, told Reuters. The official had earlier put the death toll of children at 17.

The team will aim to find out who was responsible for the tragedy over the next few days, he said.

The government will provide 50 million rupiah ($3,268) in compensation to each of victims' families, while hundreds more who were injured will be treated for free, he added.

Police and sports officials have been sent to Malang to investigate what is one of the world's deadliest stadium disasters. President Joko Widodo ordered the football association to suspend all Liga 1 matches until the investigation is complete.

FIFA, the governing body for world soccer, says in its safety regulations that firearms or "crowd control gas" should not be used at matches.

"If there hadn't been any tear gas maybe there wouldn't have been chaos," Choirul Anam, a commissioner at Indonesia's National Commission on Human Rights, known as Komnas HAM, told a news briefing on Monday.

In 1964, 328 people were killed in a crush when Peru hosted Argentina at the Estadio Nacional in Lima.

In a 1989 British disaster, 96 Liverpool supporters were crushed to death when an overcrowded and fenced-in enclosure collapsed at the Hillsborough Stadium in Sheffield.

Violence and hooliganism have long been features of Indonesian football, especially in places such as Jakarta, the capital, but the scale of Saturday's disaster in this town in Java has left the small community numb.

"My family and I didn't think it would turn out like this," said Endah Wahyuni, the elder sister of two boys, Ahmad Cahyo, 15, and Muhammad Farel, 14, who died after being caught in the melee.

"They loved soccer, but never watched Arema live at Kanjuruhan stadium, this was their first time," she added at her brothers' funeral on Sunday, referring to the home side they backed.

Indonesian daily Koran Tempo ran a black front page on Monday, centred on the words "Our Football Tragedy" printed in red along with a list of the dead.

Home side Arema FC had lost the match 3-2 to Persebaya Surabaya, though authorities had said tickets were not issued to Persebaya fans over security concerns.

Mahfud said on Sunday the stadium had been filled beyond capacity. Some 42,000 tickets had been issued for a stadium designed to hold 38,000 people, he said.

A tearful Arema FC president Gilang Widya Pramana apologised on Monday to the victims of the stampede and said he was ready to take "full responsibility" for the events.

"One match result is not worth paying for with people's lives," said Javier Roca, Arema FC's coach.

In an address on Sunday, Pope Francis said he had prayed for those who have lost their lives and for the injured from the disaster.

FIFA, which called incident a "dark day for all involved in football and a tragedy beyond comprehension", has asked Indonesian football authorities for a report on the incident.