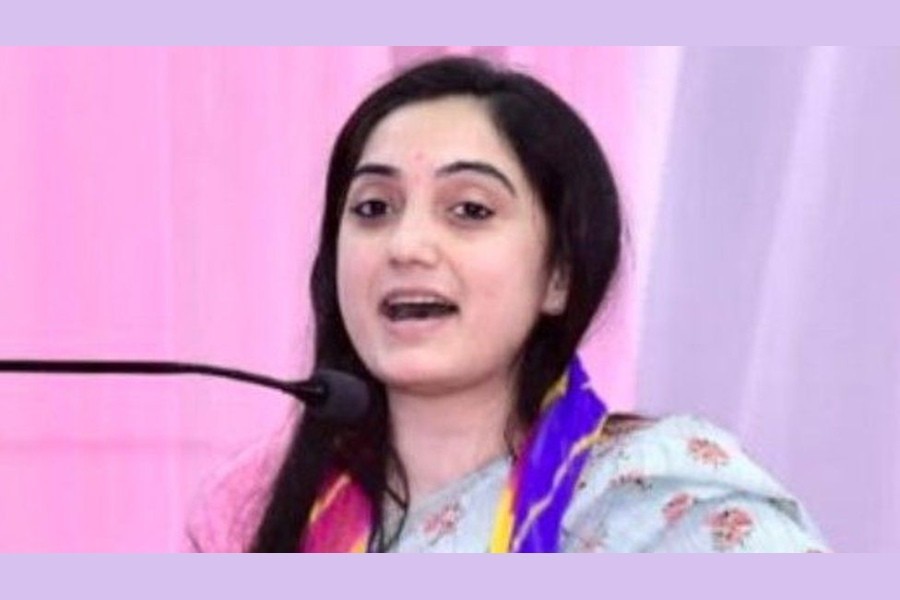 India's top court has rebuked a former spokesperson of the ruling party for her controversial remarks on the Prophet Muhammad.

The court told Nupur Sharma that "her loose tongue has set the entire country on fire".

Her remarks in a TV debate sparked violence in some parts of the country and also led to several Islamic nations registering strong protests with India, reports the BBC.

The court also asked her to appear on a TV channel and apologise to the nation.

The judge was hearing Ms Sharma's petition seeking to club different investigations ongoing against her in several parts of the country.

The court rejected the plea, saying "the petition smacks of her arrogance, that the magistrates of the country are too small for her".

Her lawyer told the court that she had apologised and withdrawn her comments.

But the judges said "she was too late to withdraw, and that too she withdrew conditionally, saying if sentiments were hurt".

The court also said being a spokesperson of a party does not give a license to say anything hurtful.

Ms Sharma was the ruling Bharatiya Janata Party's (BJP) spokesperson when she made the remarks.

She was suspended from the part after several Islamic nations, including the UAE, Saudi Arabia, Qatar and Iran, officially registered diplomatic protests.

The incident threatened to derail India's improving diplomatic ties with these countries.

The court also observed that "her outburst is responsible for the unfortunate incident at Udaipur".

The city in the northern state of Rajasthan is on the edge after two Muslim men beheaded a Hindu tailor. They filmed the act and uploaded it online, saying the attack was in retaliation to Kanhaiya Lal's support to Ms Sharma on social media platforms.

Who is Nupur Sharma?

Until she was axed, the 37-year-old lawyer was a much sought-after "official BJP spokesperson" who appeared night after night on TV debates to represent and defend Prime Minister Narendra Modi's government.

A student of law at Delhi University, Ms Sharma began her political career in 2008 when she was elected as the president of the students' union as a candidate of Akhil Bharatiya Vidyarthi Parishad (ABVP), the student wing of the Hindu nationalist Rashtriya Swayamsevak Sangh movement.

Her political career picked up pace in 2011 when she returned to India after doing her masters in international business law from the London School of Economics.

Brash and articulate, her ability to argue and put forth her point of view in both English and Hindi won her a place in the BJP's media committee for the 2013 Delhi assembly elections.

Two years later when fresh elections were called, she was the BJP's candidate against Delhi Chief Minister Arvind Kejriwal.

But the recent controversy has seriously damaged her political career.