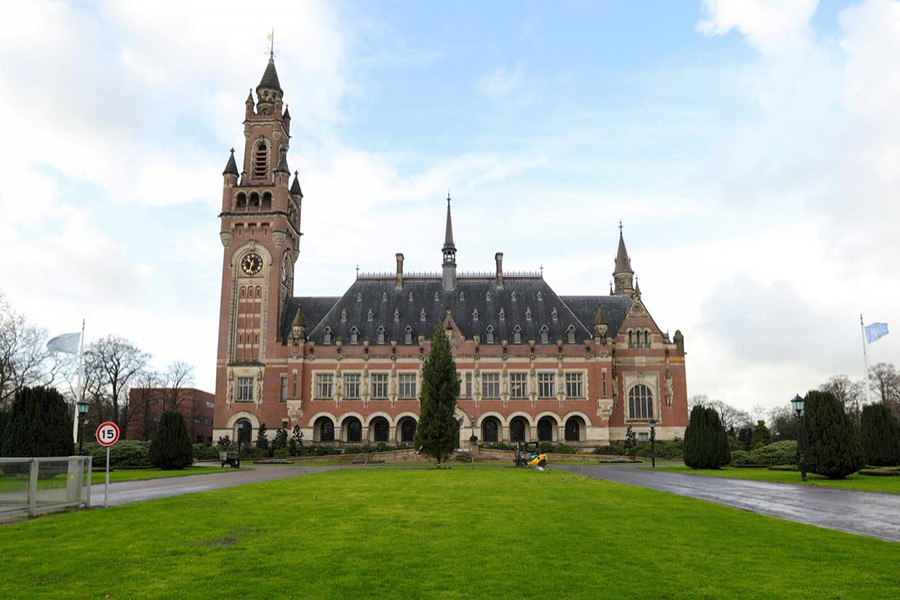 A general view of the International Court of Justice (ICJ) ahead of hearings regarding accusations of genocide of Rohingya Muslim minority by Myanmar filed by Gambia, in The Hague, Netherlands on December 9, 2019 — Reuters/Files

An order for 'Provisional Measures' from the International Court of the Justice (ICJ), that sits this (Tuesday) morning in the Hague, Netherlands to hear a case regarding the Rohingya issue, may expedite the repatriation of the Rohingyas, believe the government policymakers.

The ICJ will hear the 'Provisional Measure issue' from December 10 to 12.

Gambia, which has filed the case against Myanmar applied for an order from the court for 'Provisional Measures' "to protect the rights of the Rohingya group under the Genocide Convention, and to prevent the aggravation or extension of the dispute pending the final judgment of the Court."

"If the ICJ will pass the order for 'Provisional Measures' it will provide guarantee for the Rohingys' safety in Myanmar from the government, and they will be protected by the Myanmar government," foreign Minister Dr AK Abdul Momen told the FE when asked for Bangladesh's expectation from the ICJ.

"And then we can tell the Rohingyas here that they can go back to their home in Myanmar because their protection has been guaranteed by an international court".

Such an order will help expedite the repatriation, the minister added.

Bangladesh has sent a 14- member observer team to the Netherlands comprising experts. Former Permanent Representative of Bangladesh to the United Nations, Masud Bin Momen is leading the Bangladesh team.

The Foreign Minister felt that filing of this case by Gambia has put sufficient pressure on Myanmar.

Former Foreign Secretary Towhid Hossain also felt that the ICJ hearing has put a pressure on Myanmar. But he noted that multi-prone diplomatic offensive should be initiated by Bangladesh to compel Myanmar to take back the Rohingyas.

We have to also keep an eye on the International Criminal Court (ICC) hearing which is set to start investigation into the genocide allegation, he added.

Gambia -- with the backing of the 57 members of the Organisation of Islamic Cooperation -- has filed a case before the ICJ alleging that Myanmar's atrocities against the Rohingyas in Rakhine State violate various provisions of the Convention on the Prevention and Punishment of the Crime of Genocide.

As per ICJ rules, all member states of the convention have a duty to prevent and punish genocide. Myanmar has been a party to the Genocide Convention since 1956.

Other UN bodies could take steps to strengthen the ICJ's order and, by extension, increase the political pressure should Myanmar fail to comply.

'Under article 41(2) of the ICJ Statute, the court's provisional measures are automatically sent to the UN Security Council. Such an order would increase pressure on the council to take concrete action against Myanmar, including through a binding resolution to address some of the indicators of genocidal intent outlined in the comprehensive 2018 report of the UN Independent International Fact-Finding Mission on Myanmar," according to an analysis of the Human Rights Watch .

The UN General Assembly can also reinforce the weight of an ICJ order on Myanmar by passing a resolution urging the government to comply with its terms, the HRW said while interpreting the ICJ law.

Shanghai shuts down all cinemas amid Coronavirus outbreak