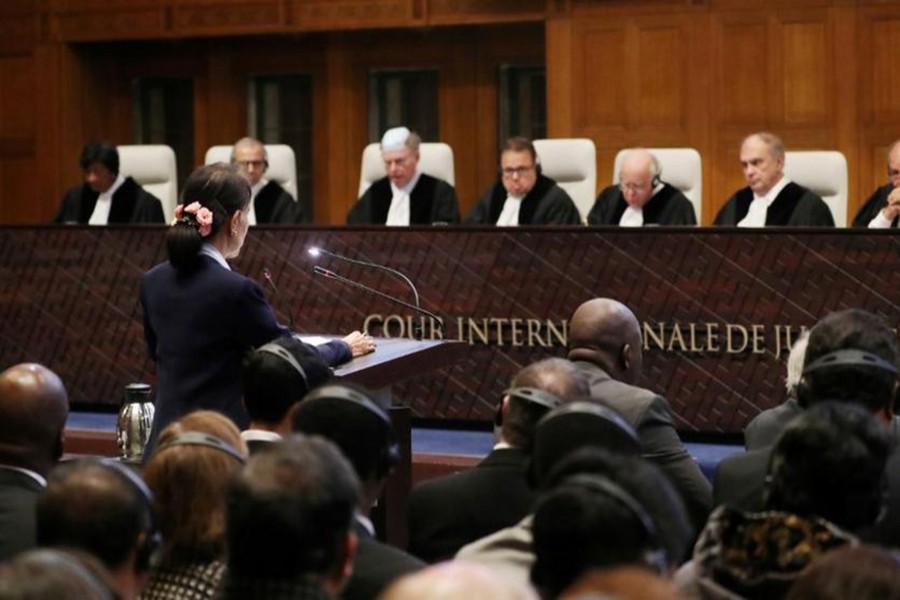 Myanmar's leader Aung San Suu Kyi speaks in front of the judges on the second day of hearings in a case filed by Gambia against Myanmar alleging genocide against the minority Muslim Rohingya population, at the International Court of Justice (ICJ) in The Hague, Netherlands on December 11, 2019 — Reuters/Files

The International Court of Justice (ICJ) will deliver on Thursday its order on request for indication of provisional measures, made by Gambia in the case concerning genocide in Myanmar.

A public sitting will take place at 10.00 am at the Peace Palace in The Hague. In the sitting, Judge Abdulqawi Ahmed Yusuf, president of the court, will read its order on "Application of the Convention on the Prevention and Punishment of the Crime of Genocide (Gambia vs Myanmar)."

A verdict from the ICJ in favour of Gambia will help resolve the Rohingya crisis, experts said.

If the ICJ order grants Gambia's application, it will put pressure on Myanmar. As a signatory of the ICJ, Myanmar is bound to comply with the ICJ verdict, former ambassador Humayun Kabir said.

And these provisional measures, which include safety of the Rohingyas, will help build confidence among the Rohingya refugees in Bangladesh, so that they will be willing to go back, he added.

Mofidul Haque, who was a member of the Bangladesh delegation to the ICJ during the hearing, opined that if the ICJ gives order in favour of Gambia, it may also issue some directives along with its order. These directives will be important for protection of the Rohingyas.

He observed that taking the case into cognizance by the ICJ is a sign of recognition of the crimes, which took place in Rakhine.

Commenting on the issue, Foreign Minister Dr A K Abdul Momen opined that accountability and justice need to be ensured to prevent recurrence of such crimes against the Rohingyas.

Talking to the FE recently, he also said if the ICJ orders for provisional measures, as sought by Gambia, it will expedite the repatriation process. It will give the Rohingyas a sense of security, he also said.

"What we want is a safe and dignified repatriation of the Rohingyas to their homeland in Myanmar," he added.

The West African nation had filed a case against Buddhist-majority Myanmar to the ICJ with the backing of the Organisation for Islamic Cooperation (OIC), Canada and the Netherlands.

At the hearing in December, Gambia alleged that Myanmar had breached the 1948 UN Genocide Convention.

It also said there was a 'serious and imminent risk of genocide recurring', and called for emergency measures to prevent Myanmar from committing any further atrocities or erasing any evidence.

Manmar's leader and Nobel laureate Aung San Suu Kyi travelled to The Hague last month to defend the bloody 2017 crackdown against the Rohingyas.

Over 750,000 Rohingyas have taken shelter in Bangladesh following widespread rape, arson and mass killings in Myanmar. Besides, an estimated 600,000 Rohingyas still live in the country's western Rakhine State in what Amnesty International has branded "apartheid" conditions.

Aung San Suu Kyi admitted the army might have used excessive force against the Rohingyas. But she said the case was based on "misleading and incomplete" claims, calling to drop it.

Earlier, the ICJ judges only once ruled that genocide was committed, in the 1995 Srebrenica massacre in Bosnia.

The ICJ is the principal judicial organ of the United Nations. It was established by the UN Charter in June 1945, and began its activities in April 1946.