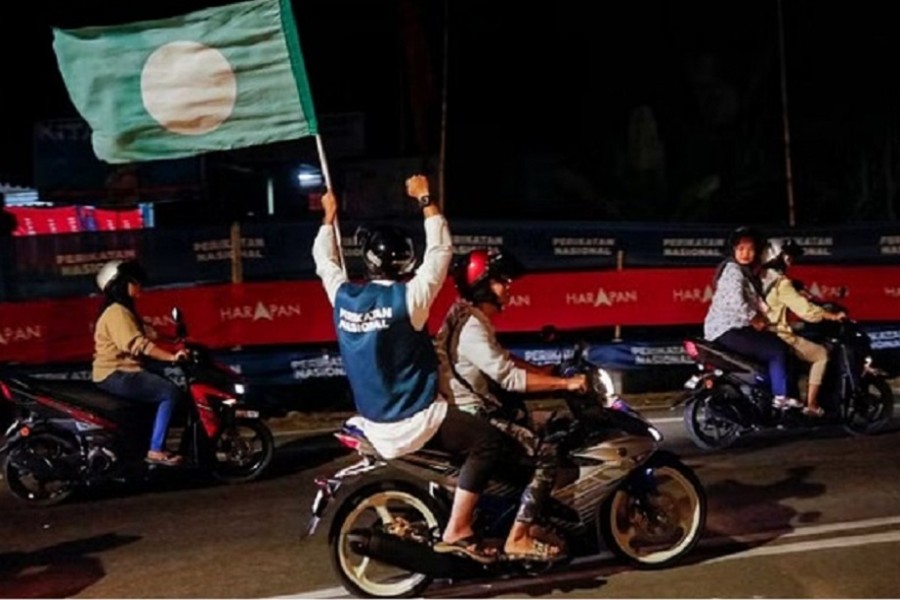 Malaysia's new prime minister, Anwar Ibrahim, will be contending in parliament with a strengthened Islamist party that espouses a stricter interpretation of sharia Islamic law, a challenge to Anwar's vision of an inclusive society.

Anwar will likely face challenges from the Parti Islam Se-Malaysia (PAS), which emerged as one of the big winners in Malaysia's election last Saturday, risking deeper divisions in the diverse, multi-faith country.

Anwar, who is ethnic Malay and Muslim, addressed race and religion in his first news conference as prime minister, promising to uphold Islam as the official religion of the country and the rights of the ethnic Malay majority, while also safeguarding the rights of all.

PAS, long a powerhouse in northeastern parts of Malaysia, has become a national force by winning the most seats of any party: 49 of the total of 222, nearly triple its tally in the last election in 2018.

PAS has banned cinemas and advocated caning as a punishment for homosexuality in states that it runs and put its religious appeals front and centre in the election, with one leader saying voters would "go to hell" if they voted for Anwar's coalition, according to Reuters.

Race and religion are thorny issues in Malaysia, where Muslim ethnic Malays form a majority in a country with significant ethnic Chinese and ethnic Indian minorities, most of them Hindu, Buddhist or Christian.

As the biggest party in parliament, PAS could push for Islamisation and more affirmative action for Malays - a long-standing policy that Anwar has opposed, analysts said. PAS could also play up its religious credentials to distinguish itself from other Malay-centric parties, they say.

Under current president Abdul Hadi Awang, PAS has been pushing for the expansion of sharia that allows for harsher punishments for Muslims nationwide. Malaysia has a dual-track legal system, with Islamic criminal and family laws applicable to Muslims running alongside civil laws.

PAS pressed for the law aggressively as the opposition, though analysts say it moderated its views while it was part of a governing coalition after 2020.

In regional governments that it runs, PAS has enforced stricter rules. In Kelantan state, cinemas have been banned since 1990 for causing "social ills", and in 2017, a man was fined for wearing a pair of shorts that exposed his knees.

In 2018, two women were publicly caned after being accused of attempting lesbian sex in Terengganu state.

PAS has called for tighter controls on alcohol and gambling.

Analysts say the 70-year-old party, founded before Malaysia's independence from Britain, has worked for decades to build its reach, at times cooperating with Anwar and the DAP to win power.

PAS has also built a strong base through private and informal religious schools, which it partly funds.

It offers training for civil society and party members, aiming to produce scholars and professionals with Islamic knowledge, said Mohd Izani, adding that such efforts have helped PAS win support among young Malays who want to see reforms.

"They see PAS as a clean party and its political leaders have no integrity problems," said Mohd Izani.