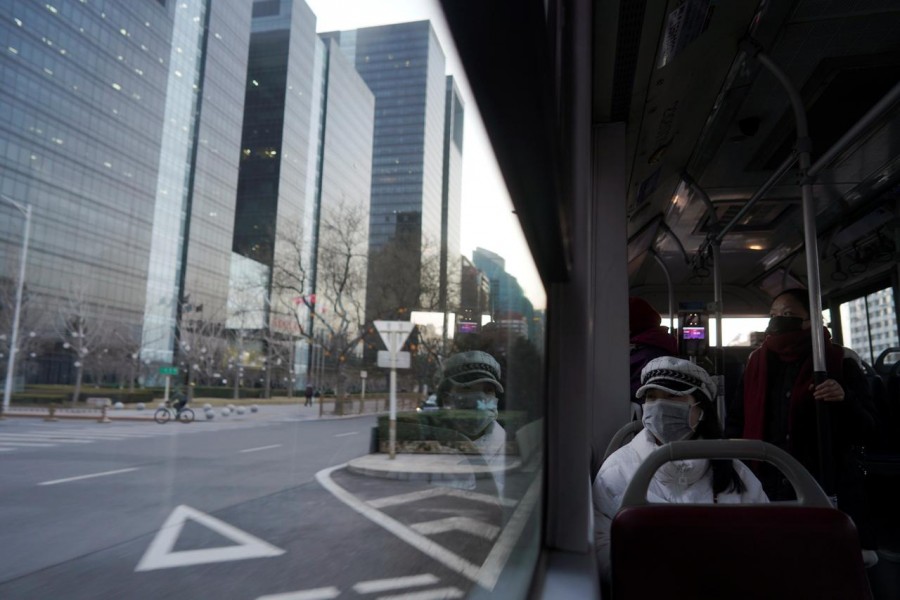 Passengers wearing face mask look on from inside a bus, following an outbreak of the novel coronavirus in the country, in Beijing's central business district, China, February 21, 2020. Reuters

China reported a decrease in the number of new deaths and new cases of the coronavirus on Saturday, while its central bank predicted a limited short-term economic impact and said the country was confident in winning the fight against the epidemic.

Mainland China had 397 new confirmed cases of coronavirus infections on Friday, down from 889 a day earlier, the national health authority said.

But the number of infections continued to rise elsewhere, with outbreaks worsening in South Korea, Italy and Iran and Lebanon. The World Health Organization warned that the window of opportunity to contain the international spread was closing.

Concerns about the virus weighed on US stocks and the Nasdaq had its worst daily percentage decline in about three weeks on Friday, driven by an earlier spike in new cases and data showing stalling US business activity in February.

South Korea reported another spike in infections with 142 confirmed cases on Saturday, taking its tally to 346, about half related to those who attended a church service in Daegu. Cases in one hospital jumped from 16 to 108 overnight.

The virus has spread to some 26 countries and territories outside mainland China, killing 11 people, according to a Reuters tally.

“We still have a chance to contain it,” Tedros Adhanom Ghebreyesus, WHO director-general, said on Friday.

“If we don’t, if we squander the opportunity, then there will be a serious problem on our hands.”

An outbreak in northern Italy worsened, with its first death, an elderly man, among 17 confirmed cases including its first known instance of local transmission.

The total number of confirmed cases in mainland China rose to 76,288, with the death toll at 2,345 as of the end of Friday. The central province of Hubei, the epicentre of the outbreak, reported 106 new deaths of which 90 were in its capital Wuhan.

Chinese scientists on Friday reported that a woman from Wuhan had travelled 400 miles (675 km) and infected five relatives without ever showing signs of infection, offering new evidence of asymptomatical spreading.

Senior Chinese central bank officials sought to ease global investors’ worries about the potential damage to the world’s second-largest economy from the outbreak, saying interest rates would be guided lower and that the country’s financial system and currency were resilient.

Chen Yulu, a deputy governor of the People’s Bank of China, said policymakers had plenty of tools to support the economy, and that they were fully confident of winning the war against the epidemic, according to China Central Television (CCTV).

“We believe that after this epidemic is over, pent-up demand for consumption and investment will be fully released, and China’s economy will rebound swiftly,” Chen said.

China has recently cut several of its key lending rates, including the benchmark lending rate on Thursday, and has urged banks to extend cheap loans to the worst-hit companies which are struggling to resume production and are running out of cash.

Some analysts believe China’s economy could contract in the first quarter from the previous three months due to the combined supply and demand shocks caused by the fast-spreading epidemic and strict government containment measures. On an annual basis, some warn that growth could fall by as much as half from 6.0 per cent in the fourth quarter.

Most expect a rebound in economic activity in the spring, providing the outbreak can be contained soon and factories hit by staff and raw material shortages can return to normal production in the next few weeks.

However, transportation restrictions remain in place in large parts of the country. While more firms are reopening, the limited data available so far suggests manufacturing is still running at levels far below those in the same period last year, and disruptions are starting to spill over into global supply chains as far away as the United States.

Finance leaders from the Group of 20 major economies were set to discuss risks to the world economy in Saudi Arabia this weekend. The International Monetary Fund said it was too soon to assess what the virus impact would be on global growth.

Another centre of infection has been the Diamond Princess cruise ship quarantined in Japan since February 03, with more than 630 cases accounting for the biggest cluster outside China.

Australia said on Saturday that four more of its nationals evacuated from the ship tested positive for coronavirus, in addition to two individuals previously identified.

A second plane with 82 Hong Kong residents who were on the ship landed in the Asian financial hub, where they will face a further 14 days of quarantine, and some 35 British passengers were due to arrive back home on Saturday, where they would be quarantined.

US authorities said that of 329 Americans evacuated from the ship, 18 tested positive.

Ukraine’s health minister joined evacuees from China for two weeks’ quarantine in a sanatorium on Friday in a show of solidarity after fears over the possible spread of coronavirus led to clashes.

N Korea fires more missiles than ever amid coronavirus outbreak

India to use some train coaches as coronavirus isolation wards

In Iraq, coronavirus terrifies even doctors