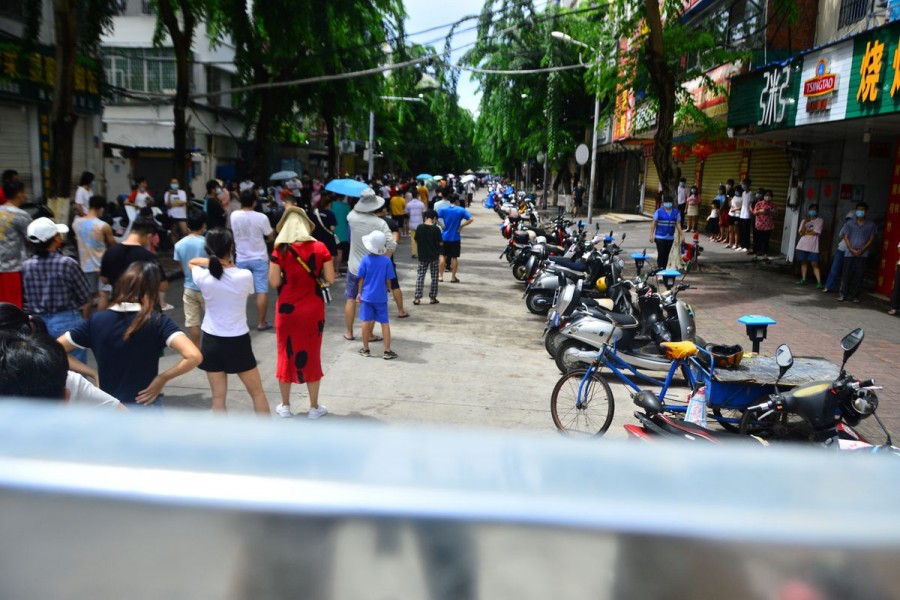 China raced on Tuesday to stamp out COVID-19 outbreaks in the tourist hubs of Tibet and Hainan, with the authorities launching more rounds of mass testing and closing venues to contain the highly transmissible Omicron variant.

Mainland China reported 828 new domestically transmitted cases across more than a dozen provinces and regions for Aug 8, with over half of them in Hainan, a highly popular tourist destination, official data showed on Tuesday.

Tibet, which until now had reported only one symptomatic case since the pandemic started more than two years ago, has also reported cases.

Parts of Tibet were running mass COVID-19 testing on Tuesday, including its two largest cities Lhasa and Shigatse, where local authorities suspended large events, closed entertainment and religious venues, and shut some tourist sites including the Potala Palace.

Tibetan authorities reported one local patient with confirmed symptoms and 21 local asymptomatic infections on Aug. 8. While the case load was very small compared with elsewhere in China and globally, the rare infections struck a nerve among some residents.

"Although my life and work aren't affected much and Lhasa took actions very quickly, I was still quite shocked, as Tibet had been COVID-free for about 920 days," said Yungchen, a 26-year-old Lhasa resident, who was told by her employer to work from home.

"I was a bit worried, because we don't know when and where the infected people contracted the virus," she told Reuters, preferring not to give her full name.

Yungchen said she doesn't expect a Shanghai-style months-long lockdown in Lhasa, but still bought rice and cooking oil. She bought enough to last four to five days in case she is unable to dine out if COVID restrictions are tightened.

Shigatse, gateway city to the Everest region in Tibet, has scheduled a "silent period" lasting three days during which people are banned from entering or leaving, with many businesses suspended.

Both Lhasa and Shigatse were conducting a fresh round of mass testing, and the second round begins on Wednesday, state television said on Tuesday.

In Tibet's western Ngari prefecture, a sparsely populated region that has attracted many pilgrims to Mount Kailash, three towns have started three rounds of mass testing, while the rest have started on their first, state television said.

Subvariants of Omicron are challenging China's strategy of swiftly blocking the spread of each nascent cluster.

Tibet and Hainan, which have seen relatively few cases for more than two years, are now facing risks of persistent tight restrictions as the economy weakens. Their tourism-reliant economies could be particularly vulnerable if the outbreaks are prolonged.

In 2019, Tibet received a record 39.6 million domestic tourists drawn to its unspoiled natural scenery and promise of adventure travel. That was comparable to the 40.9 million international tourist arrivals to the United Kingdom that year.

In tropical Hainan, millions of residents are under lockdown across several cities and towns, allowed out only for necessary reasons such as COVID tests, grocery shopping and essential job roles.

Dongfang, a city of over 400,000 residents, entered a three-day lockdown starting on Tuesday. The provincial capital Haikou has lifted its lockdown that lasted hours on Monday.

Around 178,000 tourists are also stranded on the island, according to state media reports. Hainan said on Tuesday certain tourists are allowed to leave if they can show negative test results.

Provincial authorities must adopt all measures to achieve by Friday "COVID zero at the community level" where no new cases emerge in communities outside quarantined areas, Hainan's government said in a statement late on Monday.

Hainan's success in containing smaller clusters in April and July has resulted in complacency among officials and residents, one provincial health official said.

"We still have many shortcomings and weaknesses in COVID epidemiologic investigation, testing and treatment," Zhou Changqiang, the head of Hainan's health commission, told state television late on Monday.