Americans begin to surface from isolation as states ease clamp-downs 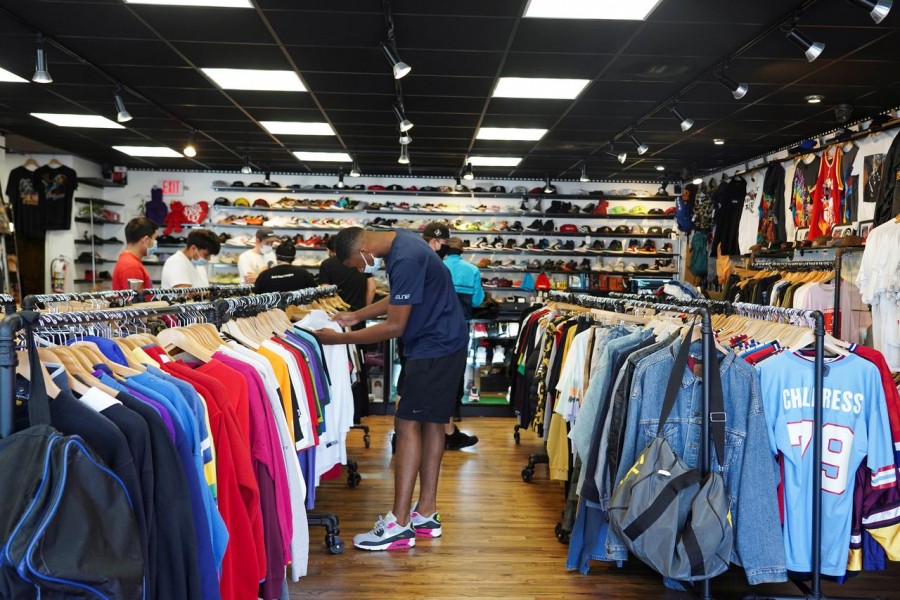 Customers and employees of Petty Cash clothing store wear masks as restaurants and stores are reopened following the lifting of some restrictions in place to prevent the spread of the coronavirus disease (COVID-19) in Houston, Texas, US, May 1, 2020. REUTERS/Go Nakamura

Americans in about half of US states, led by Texas and Georgia, began emerging on Friday from home confinement while California and New York held fast to business closures and other restrictions imposed in the face of the coronavirus pandemic.

Texas on Friday began a phased-in reopening of businesses shuttered more than a month ago, with restaurants, retail stores and malls allowed to open at 25 per cent capacity.

A second phase is planned for May 18 if infection rates continue to decline, reports Reuters.

“It’s a fraction of a typical Friday crowd, but compared to the last couple months it’s better than zero,” said Omid Rafiei co-owner the Wakefield Crow Bar in Houston, which reopened for dine-in customers with a limited menu.

“I feel comfortable with the protocols we have in place,” Rafiei said, referring to required face masks for staff and greater separation between tables.

Across Texas, major employers were putting plans in place to bring staff back to their offices.

Chevron Corp has not yet made decisions on timing or locations, spokesman Sean Comey said, but the oil company is working on guidelines for the restart.

“Some workers are eager to get back to the office,” said ConocoPhillips spokesman John Roper. Conoco alerted its 2,500 Houston-area workers on Thursday it will reopen its corporate headquarters in phases beginning May 11.

About half of US states, joined by some local jurisdictions, have moved toward at least partial lifting of shutdowns as the number of new COVID-19 cases began to drop or level off. Governors have been under pressure from citizens agitating for relief from the restrictions as US Department of Labor data this week showed some 30 million Americans have sought unemployment benefits since March 21.

As of Friday, the number of known infections nationwide had climbed to more than 1 million, including nearly 64,000 deaths, according to a Reuters tally.

President Donald Trump added to the pressure on governors on Friday, urging Michigan’s Democratic governor, Gretchen Whitmer, to compromise with activists who have protested her request to extend emergency powers to combat COVID-19.

“The Governor of Michigan should give a little, and put out the fire. These are very good people, but they are angry. They want their lives back again, safely! See them, talk to them, make a deal,” Trump tweeted.

California has also seen protests over Governor Gavin Newsom’s sweeping stay-at-home orders, which remain fully in place, and crack-down on beach goers who have defied those restrictions.

Newsom struck a conciliatory tone during his daily remarks on the pandemic on Friday, telling Californians for the first time that the state may be only days away from lifting some of the rules but that residents needed to stay strong in the meantime.

“If we can hold the line and continue to do good work ,we’ll get there much sooner,” the Democratic governor said.

Governor Andrew Cuomo of New York, which has lead the country in coronavirus deaths, said on Friday that all state schools, colleges and universities would remain closed for the remainder of the academic year due to the pandemic.

Washington State, where Seattle was an early hot spot for the virus, extended its lockdown to May 31, Governor Jay Inslee announced.

Georgia has so far gone farthest toward reopening its economy, with nearly every business in the state free to reopen on Friday. The move by Republican Governor Brian Kemp is being watched by the federal government and other states to see if the number of cases in Georgia surge.

Dr. Anthony Fauci, a top pandemic adviser to Trump, said earlier this week he was concerned about states and communities reopening ahead of a timeline recommended by the White House.

But in Atlanta on Friday Kemp’s decision was cheered by Michael Bowers, who co-owns Bowers Watch & Clock Repair in the city’s tony Buckhead neighbourhood.

“We need to reopen,” Bowers, 55, said of the small business his grandfather started in the 1940s. “We couldn’t stay alive with doors shut. We need that money stream or we fail.”

The number of confirmed COVID-19 cases in Georgia rose to 27,270 on Friday, according to the state Department of Public Health, an increase of more than 1,000 from Thursday.

With stores shut, Americans have relied heavily on home deliveries of everything from food to clothes and office equipment, giving online retailers like Amazon.com Inc (AMZN.O) a heavy workload.

Some workers at Amazon, Target Corp and Instacart Inc staged protests and sick-outs in New York, Pennsylvania, Oregon and other states on Friday to demand a safer work environment and better pay during the outbreak.

In Los Angeles, street vendors drove around City Hall in a caravan pleading for rent relief in a May Day demonstration, saying they have been unable to collect unemployment benefits because of the informal nature of their work or because of their immigration status.

“I’m trying to get help from food banks and donations,” said Francisca Salgado, 36, who sat in a minivan with her three children. “We’re not qualified for unemployment.”

New Mexico Governor Michelle Lujan Grisham on Friday ordered a lockdown of the town of Gallup after its mayor requested the measure to control the state’s worst coronavirus outbreak.

All roads into the town of 22,000 people were to close and businesses shut nightly from 5 p.m. Gallup is the county seat of McKinley County, which forms part of the hard-hit Navajo Nation reservation. The county has 1,027 coronavirus cases, the highest of any in New Mexico, and 19 deaths.