US issues new Russia sanctions for annexations in Ukraine 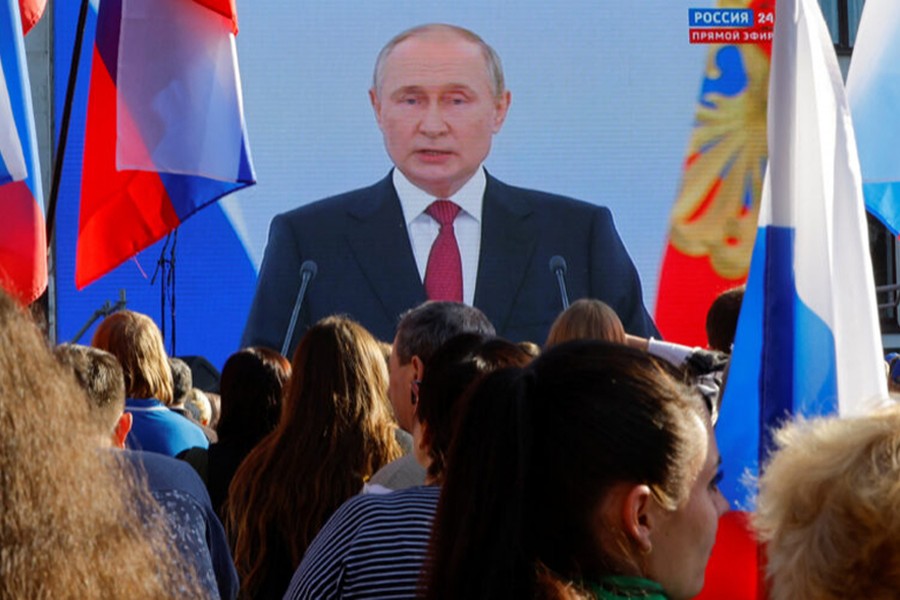 People gather near a screen showing Russian President Vladimir Putin during the broadcast of a ceremony to declare the annexation of the Russian-controlled territories of four Ukraine's Donetsk, Luhansk, Kherson and Zaporizhzhia regions, after holding what Russian authorities called referendums in the occupied areas of Ukraine that were condemned by Kyiv and governments worldwide, in Luhansk, Russian-controlled Ukraine on September 30, 2022 — Reuters photo

The United States on Friday imposed wide-ranging sanctions on Russia over its declared annexation of parts of Ukraine, targeting hundreds of people and companies, including those in Russia's military-industrial complex and lawmakers.

"We will rally the international community to both denounce these moves and to hold Russia accountable. We will continue to provide Ukraine with the equipment it needs to defend itself, undeterred by Russia’s brazen effort to redraw the borders of its neighbor," US President Joe Biden said in a statement.

The latest sanctions come on top of sweeping measures already imposed by the United States and allies this year that have already crippled Russia's international trading and local economy. But they stop short of Russia's energy industry, the country's largest source of hard currency.

Russia's embassy in Washington did not immediately respond to a request for comment. In a speech on Friday, Putin criticised the West as neo-colonial and Satanist; Ukraine said it would fast-track its application to join NATO, the US-led Western military alliance.

Guidance from the US Treasury and Commerce departments warned that anyone outside Russia, including companies, that provide political, economic or material support to Moscow faced a heightened risk of sanctions.

The Treasury sanctions generally freeze any US assets of those designated and bar Americans from dealing with them.

Commerce added 57 entities in Russia and Crimea to bar exports.

Treasury said it imposed sanctions on 14 people in Russia's military-industrial complex, two leaders of the central bank, family members of top officials and 278 members of the legislature "for enabling Russia's sham referenda and attempt to annex sovereign Ukrainian territory."

Russia moved to annex the Donetsk, Luhansk, Kherson and Zaporizhzhia regions in eastern and southern Ukraine after holding what it called referendums – votes that were denounced by Kyiv and Western governments as illegal and coercive.

Among those designated for US sanctions were Deputy Prime Minister Alexander Novak; 109 State Duma members; the Federation Council of the Federal Assembly of Russia and 169 of its members; and the governor of the Central Bank of Russia, Elvira Nabiullina.

Washington said Sinno Electronics Co Ltd, previously placed on the Commerce Department's entity list, maintained a relationship with the Russian firm even after the invasion of Ukraine in late February.

Sinno did not immediately respond to a Reuters request for comment.

Taco LLC in Armenia, Russia's Novastream Limited, a Belarusian state-owned supplier, and Russian technology and defence firms were among other companies designated over Russia's defence procurement.

The US State Department in a separate statement said it imposed visa restrictions on more than 900 people, including members of the Russian and Belarusian military and "Russia’s proxies for violating Ukraine’s sovereignty, territorial integrity, and political independence," barring them from travelling to the United States.

The United States singled out a Russian national, Ochur-Suge Mongush, for his involvement in what US Secretary of State Antony Blinken called “a gross violation of human rights perpetrated against a Ukrainian prisoner of war,” and said Mongush and his immediate family members cannot enter the United States.

Canada also announced measures on Friday against dozens of oligarchs, financial elites and their family members, plus 35 Russian-backed senior officials in the regions where the referendums took place. Britain also put sanctions on the central bank governor and imposed new services and goods export bans.

The action against Sinno Electronics serves as a warning to other Chinese companies and those that might do business with Russia, he said.

"I'm impressed at how robust this is given that this was a relatively short turnaround," O'Toole said.

Sullivan spoke with NATO Secretary General Jens Stoltenberg on Friday about their "shared concern" over the Russian annexations and the need to protect critical infrastructure after the apparent sabotage of the Nord Stream 2 gas pipeline in the Baltic Sea, the United States said.