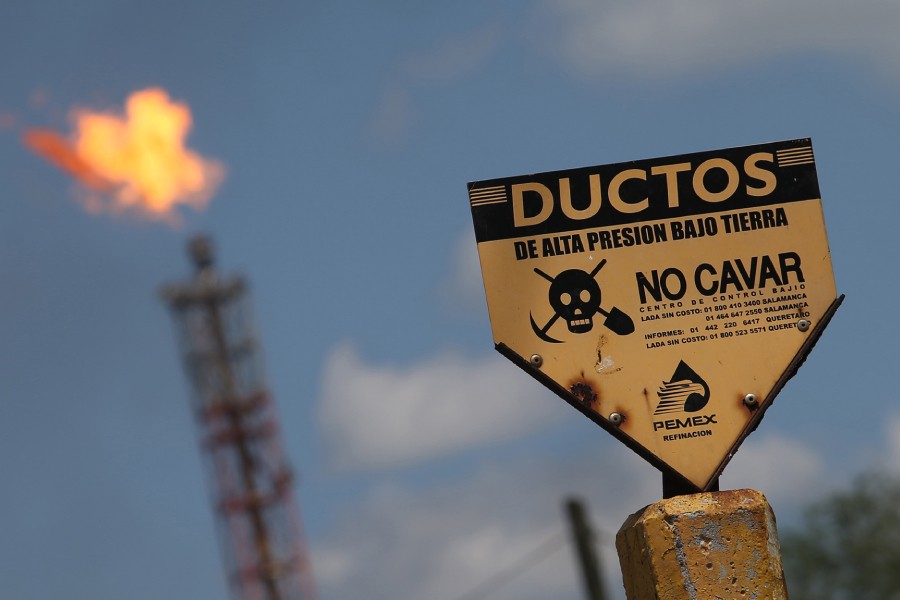 Mexico’s drug gangs increasingly extort workers at refineries, like this facility in Salamanca, for information on fuel deliveries and pipeline shipments. REUTERS/Edgard Garrido

Mr Trump had vowed to label the gangs as terrorists after the killing last month of nine American citizens from a Mormon community in Mexico.

But he has put the plans on hold on the request of his Mexican counterpart, Andrés Manuel López Obrador.

"I celebrate that he has taken our opinion into account," the Mexican president said.

"We thank President Trump for respecting our decisions and for choosing to maintain a policy of good neighbourliness, a policy of cooperation with us," he added.

Mr Trump's original announcement came after three women and six children of dual US-Mexican nationality were killed in an ambush in a remote area of northern Mexico.

Following the attack the victims' community, the LeBarons, petitioned the White House to list the cartels as terror groups, saying: "They are terrorists and it's time to acknowledge it."

The move would have widened the scope for US legal and financial action against cartels but Mexico saw it as a violation of its sovereignty, reports the BBC.

The US president has now put the plans on hold.

"All necessary work has been completed to declare Mexican Cartels terrorist organisations," Mr Trump wrote on Twitter. "Statutorily we are ready to do so."

But Mr Trump said his Mexican counterpart is "a man who I like and respect, and has worked so well with us," adding that he was temporarily holding off on the designation and stepping up "joint efforts to deal decisively with these vicious and ever-growing organisations!"

He did not comment on how long the delay would last.

After base shooting, US restricts foreign trainee access to guns