No US casualties, Iran appears to be standing down: Trump 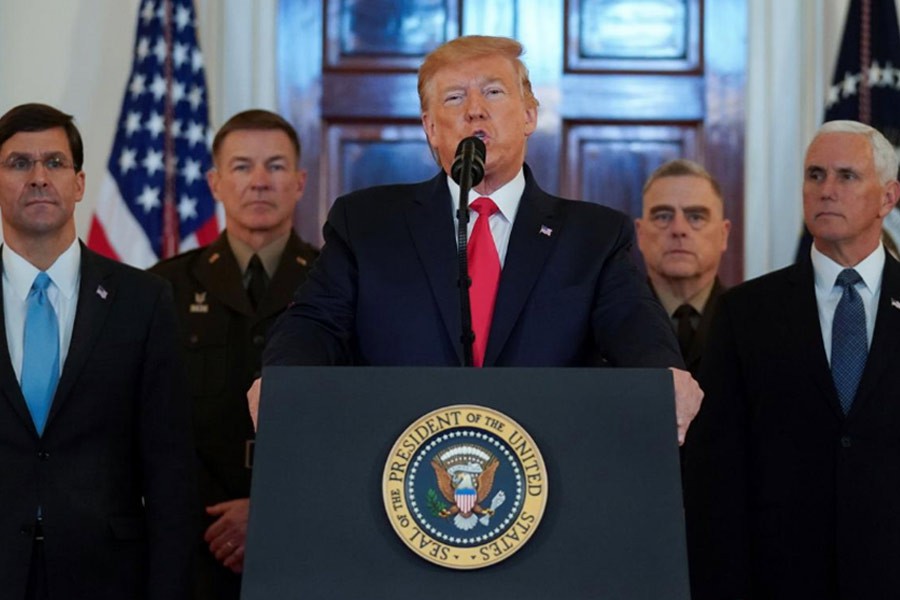 US President Donald Trump delivering a statement about Iran flanked by US Secretary of Defence Mark Esper, Vice President Mike Pence and military leaders in the Grand Foyer at the White House in Washington on Wednesday. -Reuters Photo

US President Donald Trump said on Wednesday that there were no American casualties in the Iranian strikes on military bases housing US troops in Iraq and that Tehran appeared to be standing down.

“No Americans were harmed in last night’s attack by the Iranian regime. We suffered no casualties,” Trump said in a White House address.

“Our great American forces are prepared for anything. Iran appears to be standing down,” Trump added.

Earlier, Iranian forces fired missiles at military bases in Iraq on Wednesday in retaliation for the US killing of an Iranian general, raising the stakes in its conflict with Washington amid concern of a wider war in the Middle East.

Iran’s Supreme Leader Ayatollah Ali Khamenei, addressing a gathering of Iranians chanting “Death to America”, said the attacks were a “slap on the face” of the United States and said US troops should leave the region.

Trump, who ordered the drone strike that killed General Qassem Soleimani in Baghdad on Friday, gave an initial response on Twitter: “All is well!”.

Trump had said casualties and damage from the missile attacks were being assessed.

US and European government sources they believed Iran had deliberately sought to avoid US military casualties in its missile strikes to prevent an escalation.

Earlier on Wednesday, an Iranian army spokesman had denied “foreign media reports” suggesting there had been some kind of coordination between Iran and the United States before the attack to allow bases to be evacuated, Fars news agency said.

The US president, who was impeached last month and faces an election this year, at the weekend threatened to target 52 Iranian sites if Iran retaliated for Soleimani’s killing.