Gunfire at US schools at record high 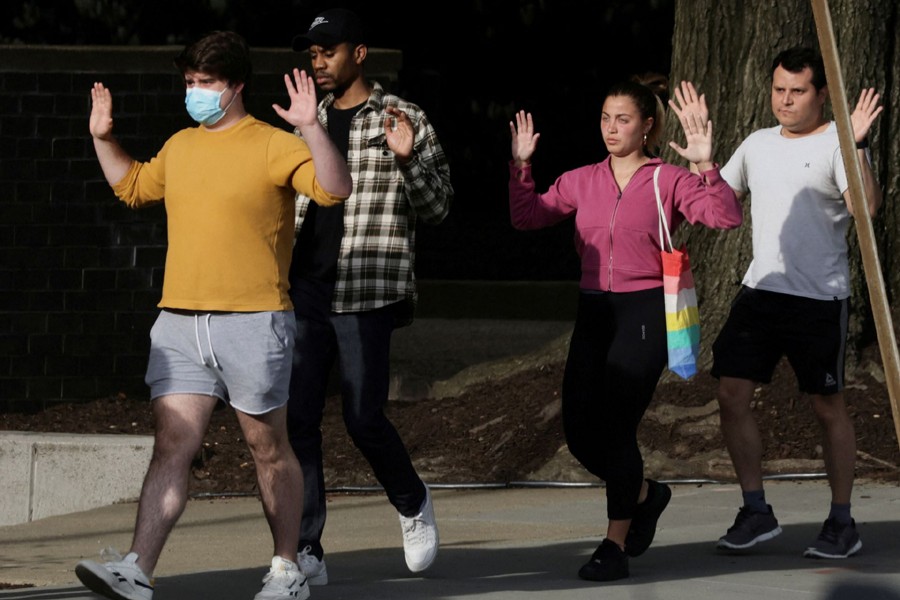 Local residents hold their hands in the air as they are evacuated to safety by police at the scene of a reported shooting and active shooter near Edmund Burke Middle School in the Cleveland Park neighborhood of Northwest Washington, US on April 22, 2022 — Reuters photo

On Tuesday three students were shot and wounded outside an elementary school in Washington DC. A day earlier, three teenagers were shot as they left their high school in Philadelphia. Last week, there were three shootings at high school graduations in Michigan, Louisiana and Tennessee.

Gunfire at US schools is at a record high, with a gun being discharged on a school property almost every day this year, according to David Riedman, a researcher who tracks such incidents, reports Reuters.

As Americans reeled from Tuesday's mass shooting in which a gunman killed 19 children and two teachers at a Texas elementary school, experts warned that a daily epidemic of smaller incidents goes largely unnoticed.

There have been 137 shooting incidents at schools so far this year - almost one a day - and 249 last year, according to Riedman, lead researcher at the K-12 School Shooting Database at the Naval Postgraduate School's Center for Homeland Defense and Security. It tracks every incident in which a gun is brandished or fired or a bullet hits school property.

"What is becoming more prevalent is systematic gun violence at schools that is dramatically increasing, especially at high schools. This is due to students carrying weapons and conflicts escalating to the point of gun violence," Riedman told Reuters.

Before Tuesday's mass shooting at Robb Elementary School in Uvalde, Texas, other shooting incidents on school grounds around the country had killed 27 people, including seven students, with 77 wounded, Riedman said.

Mass shooting attacks on schools are also getting deadlier. The three deadliest school shootings have all taken place in the last decade, according to James Densley, co-founder of The Violence Project, which tracks mass shooting events in which four or more people are killed.

Those shootings were the 2012 Sandy Hook Elementary attack, in which a gunman killed 26 children and school staff; the 2018 shooting at Marjory Stoneman Douglas High School in Parkland, Florida, which claimed the lives of 17 people; and Tuesday's massacre in Texas.

The threat of deadly violence hangs over American school children in a way it does not in most other countries. Starting from a young age, students regularly practice active shooter drills, learning to hide in classrooms with the lights off and doors barricaded.

As a daily precaution, some schools not only lock the front doors but also classroom doors, hoping to block potential gunmen who make it into the building. In Texas, there is even a school marshal program, where trained teachers can carry handguns.

The increase in shootings has spawned a schools safety industry. Many schools have installed bullet-proof windows and doors, special locks, metal detectors. Some have hired armed guards.

But that often is not enough as guns continue to make their way onto campuses with deadly results, Densley said.

US states may arrest women for crossing state lines to get abortions: Biden