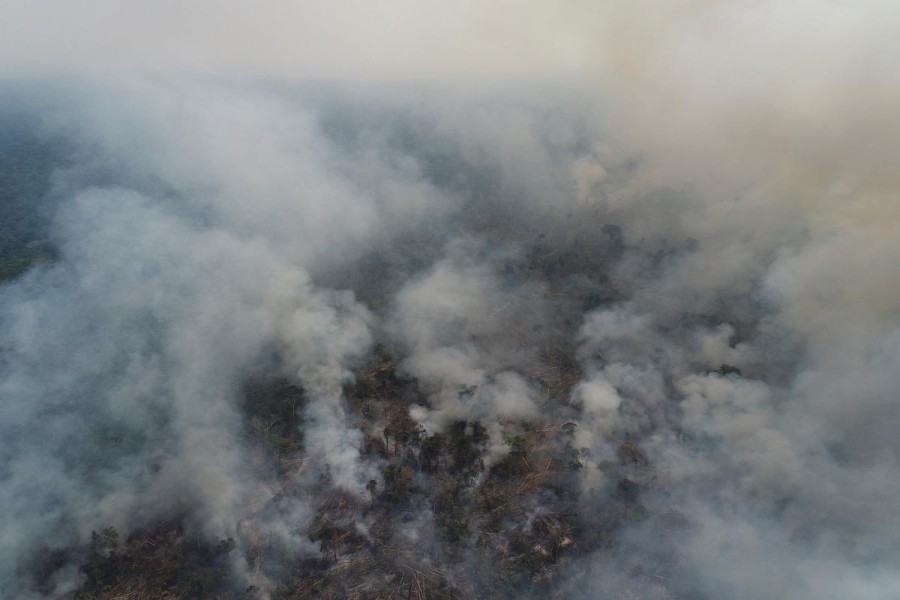 Smoke billows from a fire in an area of the Amazon jungle which burns as it is cleared by loggers and farmers near Apui, Amazonas State, Brazil on August 12, 2020 — Reuters photo

Brazil’s President Jair Bolsonaro has angrily denied the existence of fires in the Amazon rainforest, calling it a “lie,” despite data produced by his own government showing that thousands of fires are surging across the region.

Bolsonaro last year similarly denied a spike in fires that provoked a global outcry, with the right-wing populist trading barbs with French President Emmanuel Macron and other world leaders.

The president’s comments on Tuesday come even as Reuters witnesses in the remote Amazon town of Apui observed smoke blanketing the horizon in all directions during the day and large fires setting the sky aglow at night.

Fires in Brazil’s Amazon for the month of August hit a nine-year high in 2019 and this month so far looks even worse. More than 10,000 fires have been recorded in the first 10 days of August, up 17 per cent from the same period a year ago, according to data from the country’s national space research agency Inpe.

But in a speech to other South American leaders on Tuesday, Bolsonaro challenged foreign representatives to fly over the Amazon saying that traveling by air from the far flung cities of Boa Vista to Manaus, you would not see a single flame.

“They won’t find any spot of fire, nor a quarter of a hectare deforested,” the former army captain told a meeting of members of the Leticia Pact, an agreement between Amazon countries to protect the rainforest.

“This story that the Amazon is going up in flames is a lie and we must combat it with true numbers,” he said.

In his speech, Bolsonaro argued that Brazil has shown itself capable of protecting the Amazon alone because the majority of the forest is still standing.

He said the Amazon is a wet forest that preserves itself and does not catch fire. The media and foreign governments are presenting a false narrative about the Amazon, he said.

Experts say that fires are not a natural phenomenon in the rainforest, but are usually man-made in order to clear deforested land for pasture.

Deforestation rose 34.5 per cent in the 12-months through July, compared to the same period a year ago. Forest clearances did fall in July, the first decline in 15 months, a point emphasized by Bolsonaro.

Foreign pressure is mounting on Brazil to protect the world’s largest rainforest, an ecosystem vital to preserving climate change because of the vast amount of carbon dioxide that it absorbs.

Global investors managing more than $2 trillion have threatened to pull their investments out of Brazil’s meatpackers, grains traders and government bonds if Bolsonaro’s administration doesn’t take action on Amazon destruction.

Bolsonaro has dispatched the military to fight fires and deforestation since May, with the armed forces working with environmental agency Ibama to combat fires near Apui, according to Reuters witnesses.