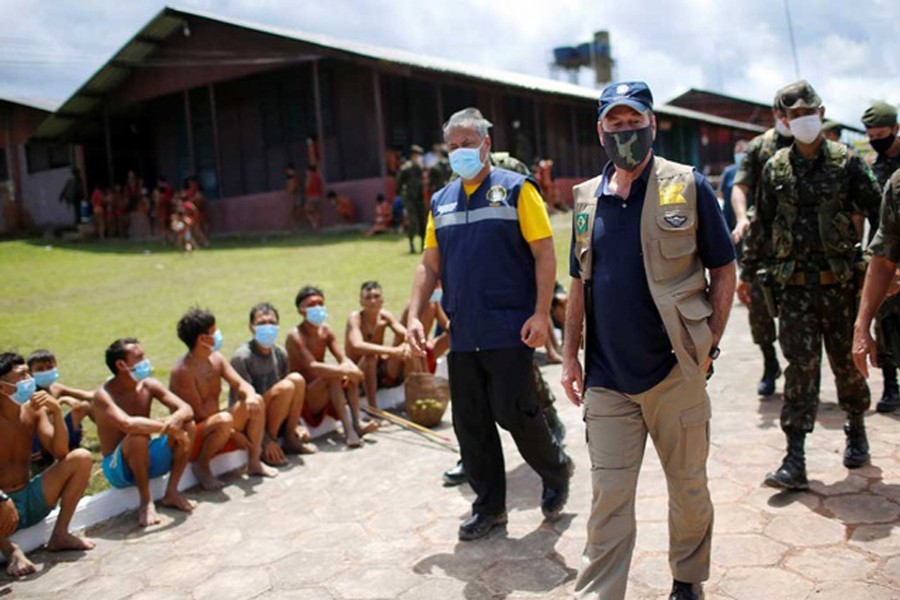 Brazil's Defence Minister Fernando Azevedo e Silva is seen during a visit, amid the spread of the coronavirus disease (COVID-19), at the 4th Surucucu Special Frontier Platoon of the Brazilian army in the municipality of Alto Alegre, state of Roraima, Brazil July 01, 2020. REUTERS

Soldiers handed out masks to barefooted Yanomami indigenous people including body-painted warriors carrying spears and bows and arrows on Wednesday on the second day of a military operation to protect isolated tribes from COVID-19, reports Reuters.

The Yanomami are the last major isolated people in the Amazon rainforest where dozens of indigenous communities have been infected with the latest disease to come from the outside to threaten their existence.

"It's all under control. We detected no cases here," Defence Minister Fernando Azevedo, a retired army general, told reporters at a frontier post called Surucucu on the border with Venezuela.

Azevedo said the death of two Yanomami purportedly shot by illegal gold miners on the vast reservation was an isolated case that is being investigated by the federal police.

A gold rush that has brought an estimated 20,000 gold prospectors to invade the Brazil largest reservation has poisoned rivers and destroyed forest, and the Yanomami say the miners have brought the novel coronavirus.

The indigenous umbrella organisation APIB asked that invaders be removed, with the deployment of military forces if necessary, from the reservations of the Yanomami, Karipuna, Uru-Eu-Wau-Wau, Kayapó, Arariboia and Munduruku peoples.