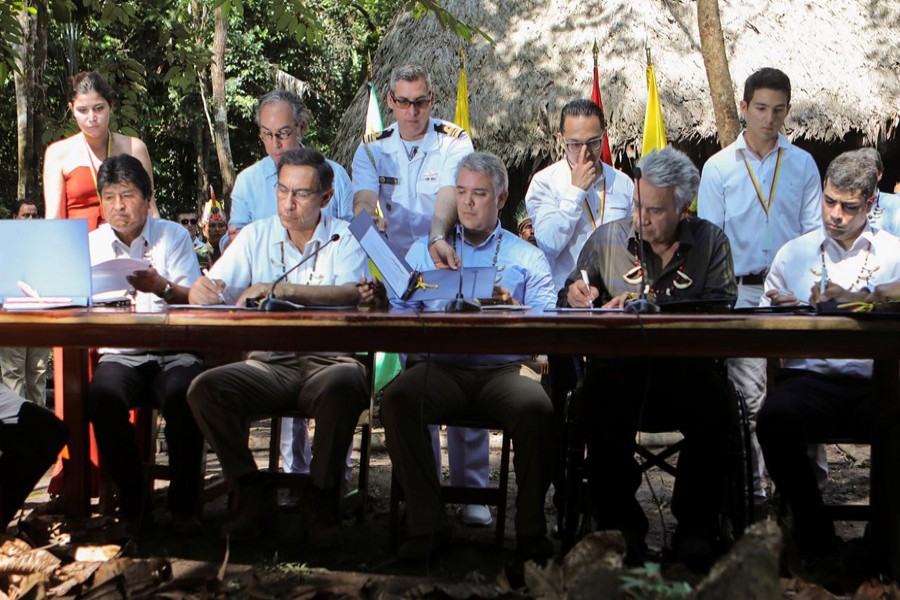 Seven Amazonian countries on Friday signed a pact to protect the world’s largest tropical forest via disaster response coordination and satellite monitoring, amid recent fires that torched thousands of square miles of the jungle.

The presidents of Colombia, Bolivia, Ecuador and Peru, the vice-president of Suriname and the natural resource minister of Guyana attended the one-day summit in the jungle city of Leticia in southern Colombia.

“This meeting will live on as a coordination mechanism for the presidents that share this treasure - the Amazon,” Colombian President Ivan Duque said at the signing, adding the countries will meet again at the United Nations Climate Change conference in December.

The countries will create a natural disaster network so they can better cooperate in the face of events like large-scale fires, the pact said.

The countries also agreed to share information on activities like illegal mining that hurt conservation, the pact said.

The group will “work together to strengthen the programs and financial mechanisms, reiterate the commitments made by countries in these scenarios, mobilize public and private resources, including the multilateral banks, as appropriate, for the implementation of this pact.”

Bolsonaro said in his remarks during the meeting that the pact was an affirmation of each country’s sovereignty.

Forest fires in the Brazilian Amazon have surged in number by 83 per cent this year, according to government data, destroying vast swathes of a vital bulwark against global climate change.

Some 60 per cent of the forest is located in Brazil. The Amazon is also home to around 1.0 million people who are members of 500 indigenous groups.

Fires have also raged in recent weeks in Bolivia.

Bolsonaro initially accused nongovernmental organisations of setting the fires, without providing any evidence, while environmentalists have warned his plans for more agriculture and mining in the region will speed up deforestation.

The far-right firebrand engaged in a public war of words with French President Emmanuel Macron, who called for more to be done to combat the fires.