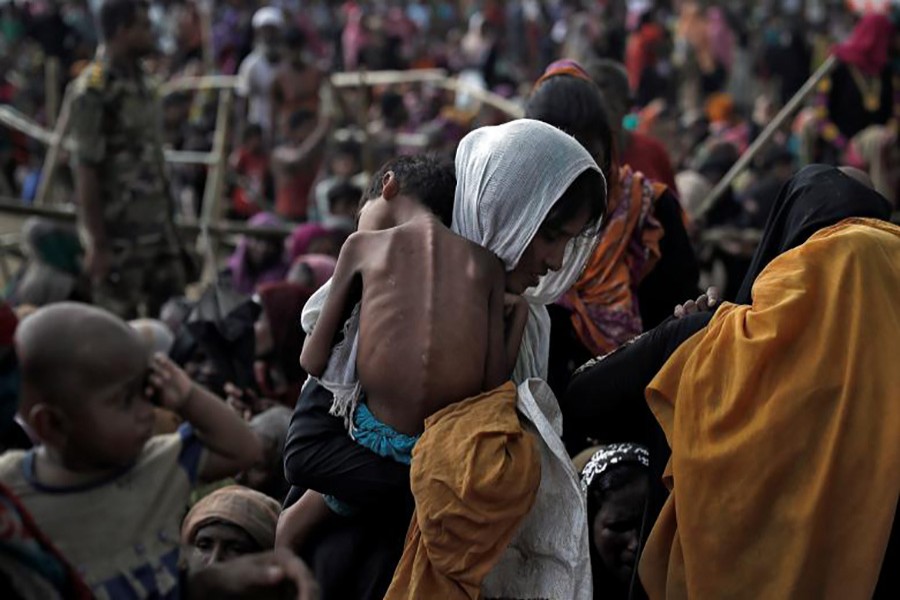 A woman carries her ill child in a refugee camp at Cox's Bazar, Bangladesh. Approximately 480,000 Rohingya Muslims have fled to Bangladesh since August following an Army crackdown in Myanmar's Rakhine State.- Reuters photo

International aid groups in Myanmar have urged the government to allow free access to Rakhine State, where an army offensive has sent 480,000 people fleeing to Bangladesh but hundreds of thousands remain cut off from food, shelter, and medical care.

The latest army campaign in the western state was launched in response to attacks by Rohingya Muslim insurgents on security posts near the Bangladesh border on Aug. 25.

The government has stopped international non-government organisations (INGOs), as well as UN agencies, from working in the north of the state, citing insecurity.

“INGOs in Myanmar are increasingly concerned about severe restrictions on humanitarian access and impediments to the delivery of critically needed humanitarian assistance throughout Rakhine State,” aid groups said in a statement late on Wednesday.

An unknown number of people are internally displaced, while hundreds of thousands lack food, shelter, and medical services, said the groups, which include Care International, Oxfam, and Save the Children.

“We urge the government and authorities of Myanmar to ensure that all people in need in Rakhine Sate have full, free and unimpeded access to life-saving humanitarian assistance.”

The government has put the Myanmar Red Cross in charge of aid to the state, with the help of the International Committee of the Red Cross.

But the groups said they feared aid getting through would “not be sufficient to meet the enormous humanitarian needs”.

Relations between the government and aid agencies had been difficult for months, with some officials accusing groups of helping the insurgents.

Aid groups dismissed the accusations, which they said had inflamed anger towards aid workers among Buddhists in the communally divided state.

The groups said threats, allegations, and misinformation had led to “genuine fears” among aid workers, and they called for an end to “misinformation and unfounded accusations” and for the government to ensure aid workers’ safety.

The United Nations has accused the army of ethnic cleansing to push Rohingya Muslims out of Myanmar, and rights groups have said the army has committed crimes against humanity and called for sanctions.

The United States said the army response to the insurgent attacks was “disproportionate” and the crisis raised questions about Myanmar’s transition to democracy after decades of military rule.

The international community has called for unfettered humanitarian access to the area and for refugees to be allowed to return safely.

Government leader Aung San Suu Kyi has faced scathing criticism and calls for her Nobel prize to be withdrawn.

She denounced rights violations in an address last week and expressed concern about the suffering of everyone caught up in the conflict.

She said the government was working to restore normalcy and any refugees verified as coming from Myanmar would be allowed to return.

Myanmar is getting ready to “verify” refugees who want to return, the government minister charged with putting into effect recommendations to solve problems in Rakhine said.

Myanmar would conduct a “national verification process” at two points on its border with Bangladesh under terms agreed during a previous repatriation effort in 1993, state media quoted Win Myat Aye, the minister for social welfare, relief and resettlement, as saying.

“After the verification process, the refugees will be settled in Dargyizar village. These are our current plans,” the minister said, referring to a Rohingya village that was razed after Aug. 25, according to satellite imagery.

It is unclear how many refugees would be willing to return.

Previous government efforts to verify the status of Muslims in Rakhine were broadly rejected as under the process, Muslims would not be recognized as Rohingya, an ethnic identity they prefer but which Myanmar does not recognize.

Most Rohingya are stateless and regarded as illegal immigrants from Bangladesh.

The government would take control of fire-gutted land, Win Myat Aye said this week. Rights groups say about half of more than 400 Rohingya villages were torched.

Officials have announced plans for resettlement camps for those displaced by the conflict, while UN officials and diplomats are urging the government to let people rebuild homes.