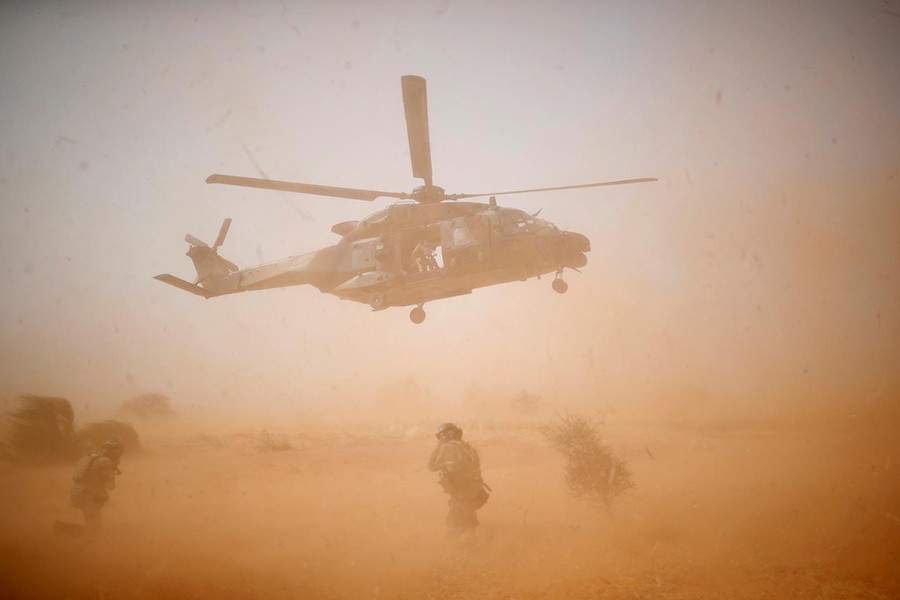 Thirteen French soldiers were killed in Mali when their helicopters collided at low altitude as they swooped in to support ground forces engaged in combat with militants, the French army said on Tuesday.

It was the biggest loss of French troops in a single day since an attack in Beirut 36 years ago when 58 soldiers died.

The ground commandos had been tracking for several days a band of militants moving on pick-up trucks and motor-bikes. After identifying the group on Monday, the Tiger and Cougar helicopters were sent to reinforce, along with a combat jet.

“In all likelihood, it was a collision between these two helicopters at low altitude that caused the accident,” the armed forces ministry said. “They were supporting commandos from the Barkhane force who were engaged with armed terrorists,” the ministry said in a statement.

France, the former colonial power in the region, first intervened in Mali in 2013 to drive out militants who had occupied the north. It still has a 4,500-strong Barkhane force countering insurgencies in the wider region.

Rather than stabilising, security has progressively worsened.

Militants with links to al Qaeda and Islamic State have strengthened their foothold across the arid region, making large swathes of territory ungovernable and stoking ethnic violence, especially in Mali and Burkina Faso.

The deaths were announced by the office of French President Emmanuel Macron who expressed his “deep sadness” at the loss.

“The President of the Republic salutes with the greatest respect the memory of these soldiers,” the Elysee Palace statement said. “He bows to the grief of their families and their loved ones.”

Monday’s deaths bring the total number of French soldiers killed in the Sahel region since 2013 to 38, according to officials in the defence and foreign ministries.

More than 200 soldiers from regional nations and international peacekeepers have been killed since September in Mali alone, with dozens more killed in Burkina Faso.

WE’RE NOT “BOGGED DOWN”

The collision occurred at 19h40 local time, when darkness would have fallen over the area, as the helicopters manoeuvred ahead of engaging with the militants, the army said.

The two helicopters hit the ground a short distance apart. There were no survivors.

Paris has maintained troops in the Sahel as part of Barkhane counter-terrorism operations, while western powers have provided funding to the regional G5 force made up of soldiers from Mali, Niger, Burkina Faso, Chad and Mauritania.

But nearly three years after its launch, the G5 Sahel remains perennially underfunded, hobbled by poor coordination and leaving much of the onus on Paris.

The United Nations MINUSMA peacekeeping mission has also been based in Mali since 2013 and includes about 15,000 soldiers and police.

France has been frustrated that it is taking the brunt of operations on the ground, although other European countries have provided logistical support, trainers and some special forces.

Armed Forces Minister Florence Parly told a parliamentary hearing on Nov. 20 that the French mission was not stuck in the region, but urged European partners to do more to support it.

“Europe is not immune to these security concerns, because if the Islamic State and al Qaeda branches were to establish themselves in a sustainable way in the Sahel, this would pose a security problem for Europe as a whole,” she said.

“I do not think we are bogged down.”