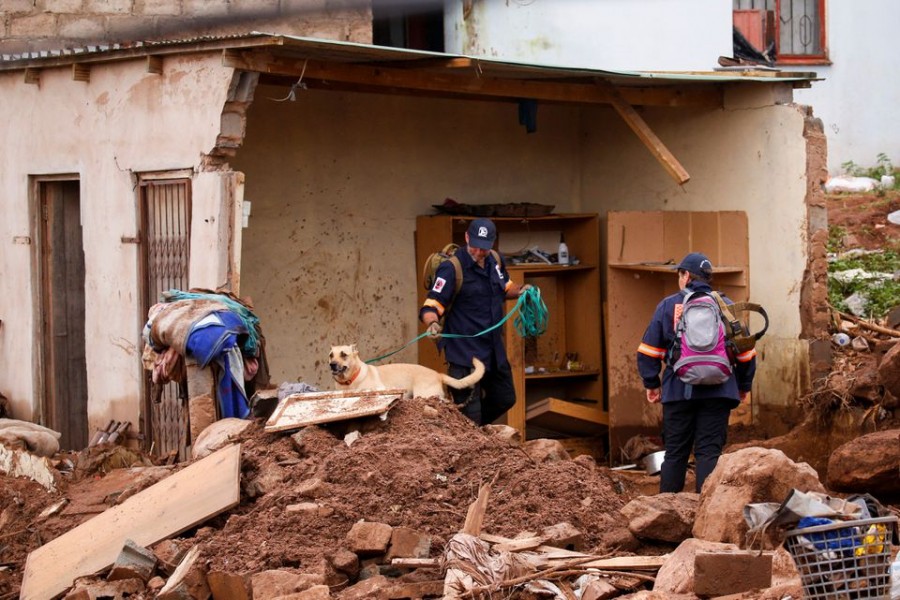 A search and rescue team use a dog to search for bodies in Dassenhoek near Durban, South Africa, April 17, 2022. REUTERS/Rogan Ward

Thousands of South African soldiers will help with relief efforts in KwaZulu-Natal province, where more than 440 people have died in floods and mudslides and dozens more are missing.

A week after the torrential rains began, the South African National Defence Force (SANDF) said on Monday it had been instructed to activate 10,000 troops for tasks including mop-up work and transporting aid.

The SANDF would also provide medical support and helicopters for rescue and reconnaissance missions.

The floods have left thousands homeless, knocked out power and water services and disrupted operations at one of Africa's busiest ports, Durban, Reuters reports.

President Cyril Ramaphosa said in a televised speech that his Cabinet had declared a national state of disaster because of the floods and extreme weather in several other provinces, which would allow for a more effective response to the crisis.

He said the finance minister would approach parliament over additional spending, beyond the 1 billion rand ($68 million) which he has said is immediately available.

Outside the town of Umbumbulu about 45 km (28 miles) southwest of Durban, herdsman Mbukeni Khwela accompanied police officers and sniffer dogs to scour a river for a missing neighbour who had been swept away.

The latest death toll from the floods stands at 443, with 48 people still unaccounted for, Ramaphosa said.

Police said they were mourning two officers and a sniffer dog killed in the floods, among the worst to affect the east coast province in recorded history.