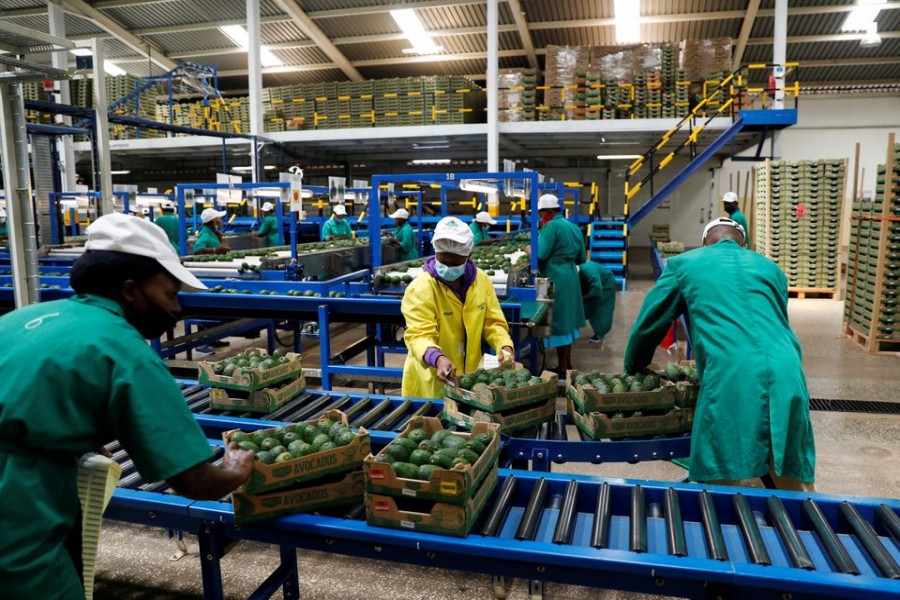 Watching workers poke avocados from the treetops in an orchard owned by Kenyan agriculture firm Kakuzi, managing director Chris Flowers revels in the thought some might soon go to the crown jewel of emerging consumer markets: China.

Taking advantage of Beijing's deeper focus on trade with African countries to help reduce gaping deficits, Kenya struck an export deal with China for fresh avocados in January after years of lobbying for market access.

While 10 avocado exporters have passed Kenyan inspections, China now wants to do its own audits and, based on the past experience of some other African fruit producers, it could take a decade to get the green light.

"You can actually have a market, but if you can't meet the standards, you can't take advantage," said Stephen Karingi, head of trade at the United Nations Economic Commission for Africa.

Reuters spoke to nine officials and businesses across Africa who said Chinese red tape and a reluctance to strike broad trade deals were undermining Beijing's plan to boost African imports.

Ramping up agricultural exports, however, is one of the few options many African countries have to rebalance their trade relationships with China and earn the hard currency they need to service mountains of debt, much of it owed to Beijing.

Take Kenya. Its annual trade deficit with China is about $6.5 billion and it has roughly $8 billion of Chinese debt. It needs nearly $631 million to service that debt alone this year, but that's almost three times its exports to China in 2021.

Many African nations now say they simply cannot afford more Chinese loans and must boost exports to China. In recognition of the need to address the imbalances, or at least stop them from getting worse, China announced a shift in strategy in November.

At a China-Africa summit typically used by Beijing to unveil eye-popping loans, President Xi Jinping announced a raft of initiatives to boost China's imports from Africa to $300 billion over the next three years and $300 billion a year by 2035.

In theory, agriculture is one of the most promising avenues, experts say. China is the world's biggest food importer while the agricultural sector in Africa is both the leading employer and contributor to economic activity.

What's more, 60 per cent of the world's uncultivated arable land is in Africa, meaning there is huge potential for growth.

"It's a win-win choice for China and Africa," said Mei Xinyu of the Chinese Academy of International Trade and Economic Cooperation, a think-tank under China's Ministry of Commerce.

For decades, China has loaned billions of dollars to Africa to build railroads, power plants and highways as it deepened ties with the continent while extracting minerals and oil.

That has helped China-Africa trade balloon 24-fold over the past two decades and two-way trade hit a record $254 billion last year despite the turmoil of the global pandemic.

But for $148 billion of Chinese goods shipped to Africa in 2021, China imported only $106 billion and five resource-rich nations - Angola, Congo Republic, Democratic Republic of Congo South Africa and Zambia - accounted for $75 billion of that.

Nigeria, Africa's most populous nation, is the top importer of Chinese goods, hoovering up $23 billion worth in 2021, but those imports dwarfed Nigeria's exports to China by eight times.

The disparity is more stark in Uganda, where about 80 per cent of its exports are agricultural products such as coffee, tea and cotton. It sent goods worth $44 million to China last year but its imports topped $1 billion.

Chinese customs data shows that more than three-quarters of African nations have trade deficits with Beijing.

"China has always been focusing on promoting the balanced development of China-Africa trade," he told Reuters.

African leaders have been pushing for years for action on trade, said Hannah Ryder, founder of Development Reimagined, an African-owned development consultancy headquartered in Beijing.

The pandemic, meanwhile, sharpened their focus on debt. Some 60 per cent of low-income countries - mostly in Africa - are either in debt distress or at high risk, with debt service burdens at their highest in 20 years.

"African countries were under pressure to not take on more lending," Ryder said. "Trade is where (the Chinese) think they can do something."

When it comes to food and agriculture, China's imports were worth $13 billion two decades ago. By 2020, they had leapt to $161 billion but Africa only accounted for 2.6 per cent of that.

"(China) actively responded to the important concerns of African countries on China-Africa trade cooperation," he said.

President Xi's plan calls for centralised clearance zones, or "Green Lanes", to speed up inspections of agricultural goods from Africa, more zero-tariff access and $10 billion in trade finance for Chinese firms importing from the continent.

"The debt situation has brought it to the fore," she said. "In the first instance it's just a super logical investment."

But some countries are struggling to take advantage of the opportunities, such as Kenya. It's the biggest producer of avocados in Africa and exported $154 million worth last year, mainly to Europe.

Eric Were at the Kenya Plant Health Inspectorate Service's (Kephis) said they had jumped through hoops to get 10 avocado companies cleared this year for Chinese exports.

He said Kakuzi, Kenya's biggest avocado grower, spent a month showing it could track its produce from the seeds, to how trees are managed, and how the avocados are harvested, processed and packed. By contrast, the European Union only requires inspection at the point of exit, Were said.

Last month, the inspectorate announced that Chinese authorities had decided to conduct their own audits - which has not always been a positive experience next door in Uganda.

"When they come, quite often they find that we are not doing well," Emmanuel Mutahunga, Uganda's Commissioner for External Trade, told Reuters.

Tanzanian coffee farmers have struggled to make their mark too while in Namibia, it took nine years from the signing of a beef export deal to satisfy Chinese regulators, leading to the first shipments in 2019.

China is also missing out on other ways to accelerate access, say experts such as Wandile Sihlobo, chief economist at the Agricultural Business Chamber of South Africa.

He said Beijing could negotiate broad trade deals with African countries and regional blocs, as the EU does.

Instead, China continues to do bilateral deals, and even then only on individual products.

"The core message here is for China to be a bit more open to Africa's food exports," he said. "A lot of it's going to have to come down to individual countries negotiating better deals."

South Africa's citrus industry was among the continent's early trailblazers in China, signing its first protocol with Beijing in 2004. It exported 162,000 pallets of fruit in 2021, but success didn't come overnight.

"It's been an incredible market for SA citrus," said Justin Chadwick, chief executive of the Citrus Growers Association of Southern Africa.

Yet Britain and the European Union, which have stringent food safety standards, are still by far the top destination for South African citrus, accounting for 44 per cent of exports last year.

"When you want to go to China, you have to get a separate protocol for each agricultural product. It averages at about 10 years for each product's protocol to be concluded," Chadwick said. "Unfortunately, China does this one product at a time."