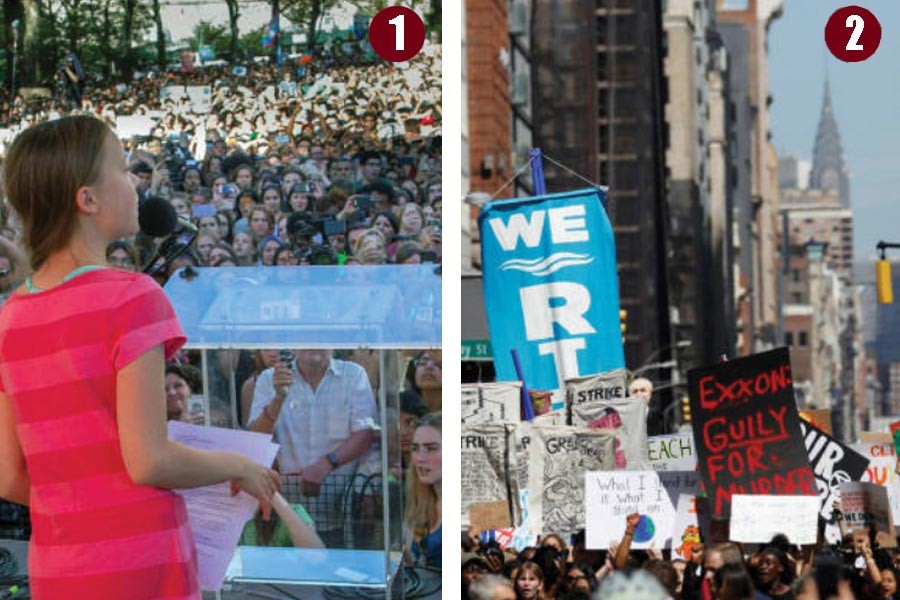 (1) Swedish teenage climate activist Greta Thunberg, centre, speaks during the Climate Strike on February 20, 2019 in New York. Photo: AP I (2) Activists march down Broadway in lower Manhattan as they take part in a demonstration as part of the Global Climate Strike in New York last on September 20, 2019. Photo: Reuters

The heat wave in Europe last summer was a scorcher - one of the worst ever, according to reports from several European nations.

Addressing an economic conference in Riyadh years ago, the former head of the International Monetary Fund (IMF) Christine Lagarde warned that if the international community does not seriously address the dangers of climate change, "we will be toasted, roasted and grilled."

But the worst affected by climate change are the world's poorer nations where droughts and hurricanes have devastated agricultural land triggering an increase in both poverty and hunger.

Conscious of the growing hazards of global warming, the UN's climate action summit got off the ground on September 23 against the backdrop of a landmark Global Assessment (GA) report from the Intergovernmental Science-Policy Platform on Biodiversity and Ecosystem Services (IPBES), released last May, which concluded that around one million animal and plant species are now threatened with extinction while three-quarters of the land-based environment and about 66 per cent of the marine environment have been significantly altered by human actions.

"Nature is declining globally at rates unprecedented in human history - and the rate of species extinctions is accelerating, with grave impacts on people around the world."

Addressing the international day of peace on September 20, Guterres said even if governments are still lacking "political will" to make full peace with nature, there is a huge hope in what the youth is doing, as millions of students took to the streets worldwide to demand action against climate change.

Asked whether the current state of affairs was due to lack of political will or decline in development aid, Dr. Pamela McElwee, Associate Professor, Department of Human Ecology School of Environmental and Biological Sciences at Rutgers, The State University of New Jersey, USA,  told IPS the Global Assessment points out that political will for biodiversity is needed at multiple scales.

"Certainly, international meetings and conventions are important, but so too are the local everyday actions of millions of consumers, voters and citizens."

She said international aid is part of the answer, "as we know that our biodiversity agreements and policies are constantly underfunded as compared to other economic development investments, but aid alone will not solve the problem."

All too often, there are insufficient incentives for people to do the right thing with regard to biodiversity. "This applies to politicians too; we have seen countries make great progress on issues like slowing deforestation, only to backtrack when a new political party or leader comes into office".

What is going on with Brazil right now, and the fires in the Amazon, is an example of that need for political will and leadership, as is the Trump administration's decision to try to gut the US Endangered Species Act. Those are steps backwards.

Ensuring that nature is considered in every political decision, not just the ones explicitly labelled as 'environmental,' is needed to move forward, said Dr McElwee, a former consultant for the World Bank, the United Nations Development Programme and other agencies.

Excerpts from the interview:

IPS: How would you respond to the landmark IPBES Global Assessment Report on Biodiversity and Ecosystem Services, which has been described as the most comprehensive study on the current state of nature -"declining globally at rates unprecedented in human history"? Is this a wake-up call to the international community? And what next?

Dr McElwee: The Global Assessment (GA) is really the first global report since the Millennium Ecosystem Assessment in 2005 to try to identify trends in nature and ecosystems, so in terms of content it is a much-needed update, and certainly a wake-up call as you put it.

In terms of process, the IPBES report is also the first 'intergovernmental' report on biodiversity, meaning that it was jointly produced between scientists and governments to lend an added weight to the findings.

Each of the 130-plus governments who are members of IPBES were able to assess, review and weigh in on the summary for policymakers that was eventually adopted. I'm hopeful that this buy-in, as well as the seriousness and urgency of the actual report findings, together will move the international community to use the GA to make important changes in how we manage the Earth.

Certainly, the amount of media, government and citizen attention the report has gotten since it was released in May gives me a lot of optimism. President Macron for example highlighted the GA findings at the G7 meeting he recently hosted in France, and has been pushing governments to commit to a charter on biodiversity.

Dr. McElwee: One of the specific chapters of the GA (Chapter 3) tackles precisely this question: how are we doing on global targets and goals, specifically on the SDGs and on the Aichi Targets of the Convention for Biological Diversity? This answer is: not well.

We are going to miss most of the targets for SDG 15. We are making progress towards achieving the Aichi target 11 to ensure 17 per cent coverage of terrestrial and freshwater ecosystems in protected areas, which will help us meet some of the SDG 15 targets.

However, coverage of key biodiversity hotspots and some ecologically representative zones are missing in that overall protected figure, and connectivity between protected areas is generally insufficient.

Outside of these protected areas, we continue to lose forests and wetlands in particular, and the GA report notes that of the 18 different types of Nature's Contributions to People assessed, ranging from water provisioning to habitat creation, all but four are in decline.

Continued roadblocks to better ecosystem management and protection include vested interests who want to continue to exploit our lands and seas for their own economic self-interest; a number of environmentally harmful subsidies that countries have used to prop up domestic constituencies from fishing fleets to energy extraction; overconsumption by many developed countries leading to unsustainable harvesting and land conversion; and underfunded international biodiversity conventions, which all contribute to the problem.

IPS: How devastating is the impact of climate change, including extreme weather, melting ice and sea level rise, on all regions of the world, particularly developing nations. Are the world's small island developing states (SIDS) really in danger of being wiped off the face of the earth as a result of climate change?

Dr. McElwee : One of the tasks of the GA was to identify the main drivers of biodiversity decline and ecosystem loss. Evaluating the evidence, the report concluded that climate change is the third most important driver of ecosystem change, behind land use change and direct exploitation of nature (e.g. fishing or wildlife hunting). It's mostly the job of the Intergovernmental Panel on Climate Change (IPCC) to assess the climate impacts on development, and last fall's IPCC report focused on how to keep climate change to 1.5 degrees C indicated there are significant risks to SIDS states if we fail to meet that goal.
Our GA report complemented the 1.5 report by identifying what the losses to biodiversity specifically would be, but also pointed out that some climate mitigation solutions to keep us to 1.5 degrees, such as biofuels, can have very negative impacts on biodiversity because they may entail land use change (conversion of biodiverse forests to monocrop biomass plantations).

Therefore, we need to make smart and urgent choices now about reducing emissions to avoid those tradeoffs with biodiversity later, and to minimize the serious consequences of failing to tackle climate change for SIDS and other poorer countries.

IPS: And what impact does climate change have on the world's indigenous communities? The UN says indigenous peoples are among the first to face the direct consequences of climate change, due to their dependence upon, and close relationship, with the environment and its resources. But their role in combating climate change is rarely considered in public discourses on climate change. Is this a fair assessment?

Dr. McElwee: Again, the IPCC reports are really the gold standard for climate impacts, and the next special report of the IPCC will be due next week looking at Oceans and the Cryosphere.

Many indigenous peoples live in or use these areas, and will be increasingly and disproportionately impacted by forced relocations caused by melting permafrost or rising sea levels, so I urge people to look out for that report's release soon.

Certainly the GA specifically looked at the impact of 'biodiversity loss' on indigenous peoples, and our message was that both the quantity and quality of nature's supply for food, health, spiritual wellbeing, and other traditional practices are in decline, caused by extractive industries, intensive agriculture, unsustainable fishing, environmental pollution, the spread of invasive species, and other environmental harms.

But indigenous peoples can play a huge role in the solutions to these problems; in fact, biodiversity is generally declining more slowly on lands that are managed by indigenous and local communities, indicating that their involvement in biodiversity management is crucial, and that they have solutions the rest of us can learn from.

IPS: Projecting into the future, what are your expectations of the 2020 Biodiversity Conference which is expected to adopt a new global framework to safeguard nature and its contributions to human well-being.? What is the current status of the negotiations which are expected to be continued in China in February 2020 and in Colombia in July 2020? Are you hopeful of a positive outcome?

Dr. McElwee: The post-2020 negotiations are ongoing, and several important meetings have just been held recently to start the ball rolling to ensure a positive outcome at the Kunming meeting in late fall 2020.

China's leadership here will be important, and they are rightly proud of some of what they have been able to achieve nationally, and are hoping to push the international community to follow their lead in terms of protected areas coverage, payments for ecological services, and other policies.

For me, one of the most important outcomes will be to take an honest and hard look at why we failed to meet so many of the Aichi Targets that were set out in in the strategic plan for biodiversity from 2011-2020. It's not enough to just set new, high achieving targets.

We need to get serious about why we didn't meet the previous ones and go about fixing those impediments as best we can, while still being ambitious in new pledges. I also think we will see a better integration of climate and biodiversity in the post-2020 agenda, as there is a lot of current talk and research about ideas like nature-based climate solutions and ecosystem-based adaptation that can drive new targets and goals.

I think there is attention to these issues at never-before seen levels, driven in part by youth and indigenous peoples' movements to raise awareness of them, so that makes me optimistic for a positive outcome.

The writer can be contacted at thalifdeen@ips.org