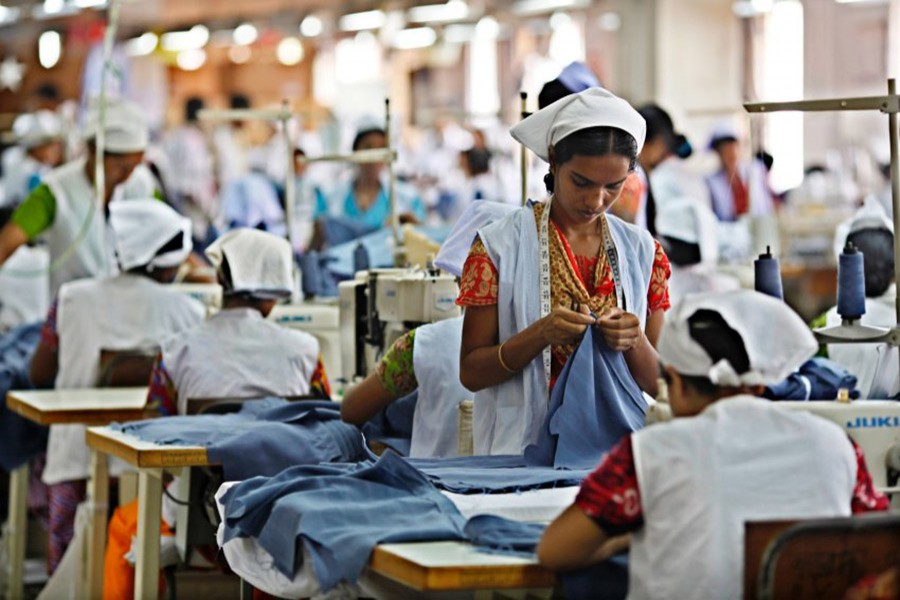 This, no doubt, shows women's advancement. However, the disadvantaged position of the female labour force is evidenced from a number of indicators. Out of the total working female labour (15+) of 19.1 million in 2015-16, 17.2 million work in the informal sector (more than 95 per cent).  According  to the QLFS, largest  share  of  female  employment  is  in  services  and sales (30 per cent), followed by agricultural work (24 per cent), elementary occupations (14 per cent) and machine operations (14 per cent). Regarding 'high-status' occupations by main industry that the survey defined, female share of  employment  as  administrative  and  commercial  managers  is  20 per cent  in  the  industry  sector and 11 per cent in the services sector.

Overall, only 13 per cent female share of employment are  as  chief  executives,  senior  officials  and  legislators  whereas  female  share  of  employment  as administrative and commercial managers is less than 13 per cent. Nearly 38 per cent of employed women work as 'contributing family helper' compared with less than 5.0 per cent for men. Thus working women are mostly concentrated in the informal and low-paid jobs along with a gross under-representation in decision making positions.

It is maintained that there are not many women who are capable of working at the decision making level in offices. This, however, may only be partly true. The number of educated women has increased over time, but the size of highly educated women is not yet as large as that of men. Recent statistics show that women's educational attainment at the secondary level is higher than men. However, it starts to decline afterwards.

Also, women are mostly engaged in low-paid jobs compared with men. According to QLFS 2015-16, although women earn about 92 per cent on average of what men earn, it varies across occupations. The low share of women's income compared with men on average is partly due to women's greater involvement in the informal sector.

Social factors also play important roles in women's employment. Many women are forced to choose between motherhood and their career due to their reproductive role. Although young university women graduates enter the job market with high enthusiasm and lot of expectations, their hopes start to fade within a short time because of familial responsibilities expected of a woman in a male-dominant society. This high exodus of young female staff at an early stage reduces the supply of capable women in senior positions in the highly competitive job market. Moreover, women have to be twice as good as men to get there!

In addition, women lack opportunities to gain knowledge and understanding from successful women executives. The concept of a 'mentor' for advancing women executives is still a rare phenomenon. A male junior executive can easily share and discuss professional issues with a senior, but for female executives this is not an easy task.

For facilitating women's greater transition to higher and decision making positions, a level playing field needs to be created along with culturing a firm conviction that women have equal capability to undertake all responsibilities that men can take. Needless to say, existing biases and prejudices work against women's advancement in our society. Often it is wrongly assumed that women would not be able to bear the responsibility or take up new roles which act as great barriers to bringing out women's full potential, abilities and talents. It shows that larger recruitment of women in the labour market is not enough, they must also be provided with equal opportunities.

In our society, the culture of valuing women's ideas is nearly absent not only within households, but in workplaces too. Often women's ideas are undervalued; female's voices are not heard until a man says the same thing -- may be in a louder and stronger voice. This undermines the confidence of females in work, not the lack of ideas or the willingness to work.

A critical challenge that women face is to make the right balance between work and family needs. This calls for introducing flexible working arrangements wherever possible, such that women can continue to remain in the labour market. Gender issues are not exclusively women's issues; men also need mentoring on gender sensitivity so that they can learn what they need to do to enhance opportunities for women's participation in the labour force.

We increasingly see that women are outperforming men in schools, universities and many other activities. Why then will the same not happen at their workplaces too? This is a structural problem; but definitely this can be overcome through right policies, a supportive environment and, above all, creating a gender-balanced society where women and men will work as equal partners.

The writer is Executive Director, Institute for Inclusive Finance and Development (InM).