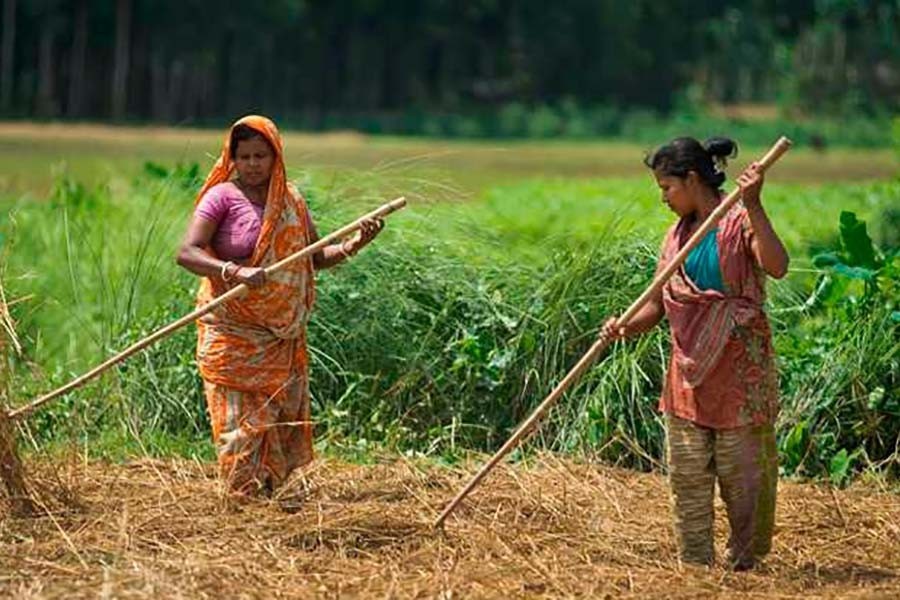 As evident from official statistics, the participation of women in the greater agricultural economy of Bangladesh is constantly on the rise. Women engaged in this sector have now crossed 10 million from a few thousands about fifty years ago. Available official statistics supports this, although there is paucity of chronological data on women's share in various vocations over the five decades since independence. The only consistent source of information has been the National Labour Force Survey, which has been conducted regularly since 1983. According to the population census carried out in the then East Pakistan in 1961, the number of females engaged in the agriculture sector in 1961 was 2,423. The first population census of independent Bangladesh in 1974 showed 15,823 women engaged in tasks related to agricultural economy out of a female population of 34.40 million. Then lastly, the Labour Force Survey of 2016-17 released in 2018 showed the number of female participants in the agriculture sector crossing 10 million mark, out of a total female population of 80.30 million.

According to agricultural economists, agricultural work entails crop production, livestock rearing, poultry and dairy farming, fish cultivation, and forestry including planting trees and plants around homesteads, etc. The participation of women in these tasks have increased now in rural areas as men are focusing more on education, jobs and businesses in the urban centres. Women are often motivated to get involved in agricultural work after getting briefings or trainings on the subject, and also as a result of encouraging responses regarding their outputs in vegetable and fruit gardening as well as rearing of poultry. Women's role in the sector is increasingly visible now, which was not the case in the past. The need for recognizing this work came to the fore after some NGOs started to shed light on the contributions made by womenfolk. Alongside the NGOs, the government is also involving the females now in various programs and trainings related to agriculture.

According to a research paper titled 'Putting Women in the Centre of Agriculture' written by Professor Ismat Ara Begum, the labour participation rate of women in villages has increased by 10 per cent compared to men over the past 25 years. Among these women, only about 15 per cent are involved in wage labour market. But women face extensive discriminations with regard to wages, and usually receive 60 per cent of what is paid to men. To cite an example, a male worker was reported to have received Taka 700 while a female worker got only Taka 400 for carrying out the same task from dawn to noon. However, womenfolk mostly work as informal family labourers, and many of them also join the agricultural labour market for earning livelihood. But their earnings from pursuits like selling commodities are mostly taken away by their husbands. As a result, the labour and time spent by female workers remain by and large undervalued. Another discrimination faced by women is with regard to land ownership. According to a research report written by Professor Sharmind Nilomi of Jahangirnagar University, whereas land ownership of women in Bangladesh was only 2 per cent in 1993, it rose to a mere 3.48 per cent in 2013. This stagnation and dismal scenario faced by women with regard to land ownership is indeed very discouraging.

According to the labour force survey of 2016-17, the proportion of women engaged in agriculture, services and industries sectors were 40.6 per ceent, 39 per cent and 20.4perr cent respectively. But although the participation rate of women in agriculture is now merely 4 per cent less than men, they remain mostly dependent on their male counterparts while taking decisions related to production and income from agricultural commodities. Research shows that only one-third women get the chance to participate in the decision-making process. Their participation in decision-making related to crop production, sale of produced crops, and fish cultivation have been found to be only 35 per cent, 33 per cent and 33 per cent respectively. Although women are found to be most active in income-generating activities like rearing poultry and livestock, only about 20 per cent women can take decisions on their own at various stages of the production cycle from inputs to outputs and outcomes.

There is another dimension to this scenario that prevails in the agriculture sector of Bangladesh. Although agriculture is the largest sector with regard to the number and proportion of workers engaged, its contribution to the country's gross domestic product (GDP) is currently only 13.6 per cent. As about 60 per cent among all female workers are engaged in this sector, their role in agriculture has now become quite significant. But hardly anyone in our male-dominated socio-economy visualises them as farmers, livestock-groomers or fish-traders. Due to their dearth of land ownership, they do not receive government facilities, agricultural cards, subsidies, bank loans, etc. Even in the area of private share-cropping through leasing, the contracts are signed by men. Consequently, although women are now more or less equal partners in agricultural work, it is the males who play the dominant leadership role. Therefore, government and private initiatives as well as a sea-change in social outlook are now needed for involving womenfolk on a larger scale in the country's agricultural economy, including in the marketing of agricultural commodities. Women certainly deserve such a treatment for the greater good of the nation.