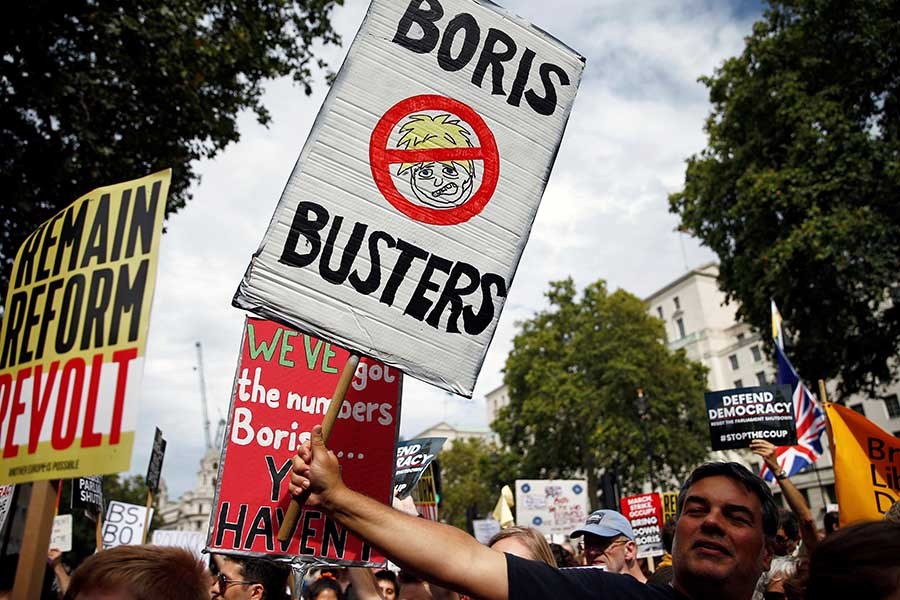 The long-running tragicomedy of the United Kingdom's relationship with the European Union is, at long last, approaching its climax. Prime Minister Boris Johnson's manoeuvre to suspend the UK Parliament for almost the entire period leading up to the Brexit deadline of October 31 was described by Speaker of the House John Bercow as a "constitutional outrage," but it had one advantage. It confronted the 650 Members of Parliament (MPs) with a clear binary choice. Either a majority of MPs will vote in the first week of September to replace Johnson with a new caretaker prime minister, or they will leave him with unconstrained power to implement his threat of a no-deal Brexit, putting Britain on a collision course with the EU (European Union). That choice, in turn, will have big implications for the EU's future.

So, how will events unfold? When MPs return from their summer recess in the first week of September, Jeremy Corbyn, the leader of the opposition Labour Party, will almost certainly present a no-confidence motion to remove Johnson from power. Because Johnson's Conservatives and the Northern Irish Democratic Unionist Party (DUP) hold a combined majority in the House of Commons of just one vote, and given that a considerable number of Tories oppose a no-deal Brexit, there is a high probability that Johnson will lose.

But that would not be enough to force Johnson's resignation. Under the 2011 Fixed-Term Parliaments Act, if a prime minister loses a no-confidence vote, Parliament must either vote for a replacement within 14 days or the defeated government remains in place and organises a general election at a time of its choosing within about three months, easily long enough for Johnson implement his promise of "Brexit, do or die" by October 31. The only way to prevent this would be to elect a new prime minister; with Parliament now due to be suspended, that vote would have to take place before September 09.

Corbyn, as leader of the opposition, has already proposed himself as a caretaker prime minister, with a strictly limited mandate to carry out just two tasks: to extend the Brexit deadline and then immediately call a general election. But with many pro-EU Tories vehemently opposed to Corbyn, another candidate for caretaker prime minister could be a less partisan figure with no personal ambitions. That could be Kenneth Clarke, the former Tory Chancellor who, as the longest-serving MP, is "Father of the House," or Harriet Harman, who served as interim Labour leader in 2015.

Or perhaps the former Labour foreign minister, Margaret Beckett, might be most likely to get Corbyn to step aside. Beckett, after all, was one of the 36 MPs who signed the petition that allowed Corbyn to run for Labour leader in the first place. Without her support, he would not be where he is today. Thus, standing aside for Beckett, who is much more likely to gain the support of anti-no-deal Tories, would be something Corbyn could sell to his supporters. In any case, if Johnson were deposed this way, voters would go to the polls in late October or November and remain in the EU until then (European leaders have repeatedly said that the Brexit deadline would be extended for a new election).

The Conservatives would be deeply split between supporters and opponents of Johnson's no-deal Brexit, underscoring the Tories' rivalry with Nigel Farage's militantly anti-EU Brexit Party. The opposition parties, meanwhile, would probably enjoy some political dividends from their temporary cooperation. The likely outcome would therefore be another "hung parliament," with no party holding a majority. This time, however, Labour, the Liberal Democrats, and the Scottish Nationalist Party might well be dominant - and all would be committed to a final referendum on whether Brexit should go ahead.

If, on the other hand, MPs fail to elect a new prime minister, Parliament will be suspended on September 10 and there will be no further obstacles to Johnson's vision of Brexit, "with or without a deal."

Johnson believes that the newfound freedom from political constraints achieved by suspending Parliament will greatly strengthen his bargaining power in demanding changes to the failed withdrawal agreement negotiated by his predecessor, Theresa May. Some EU leaders may well have been hoping that Parliament would balk at the risks of a no-deal Brexit and intervene to prevent it. With this possibility removed, the EU could decide to offer Johnson the one modest concession he has demanded for an orderly and cooperative Brexit deal: removal of the "Irish backstop" provision, which would tie Britain to EU trade policies until a new permanent trade agreement is negotiated to allow an open border between Northern Ireland and the Republic of Ireland.

Johnson could well be right. While the UK would certainly be harmed by a no-deal Brexit, the EU would also suffer severely. The UK is continental Europe's second-largest market, accounting for 12 per cent of the eurozone's total exports, almost double China's 7.0 per cent, and only slightly behind the 14 per cent share that goes to the US.

To risk a rupture with Europe's second biggest customer would be particularly dangerous at a time when the US and China are engaged in a trade war, Germany is on the brink of recession as a result of collapsing car sales, France is riven by civil disobedience, and Italy is in open revolt against EU rules. Moreover, a no-deal Brexit would hit Ireland - the one EU member directly affected by the backstop - harder than any other country, and not only because of obvious disruptions in trade and transport.

Much more seriously, Ireland would have to take responsibility for erecting the "hard border" in Northern Ireland that the backstop was designed to avoid. Why would the Irish government prefer the certainty of putting its police and army in harm's way immediately to protect a hard border, rather than agreeing to a compromise with Johnson that would remove the backstop at the cost of a remote possibility that a border would become necessary many years from now?

Once this question starts to be asked in Dublin, and also in Brussels, Berlin, and Paris, the answer is likely to prove favourable to a new Brexit deal. This is why Johnson is probably right to think that his cynical calculation to suspend Parliament has made a last-minute Brexit deal more likely. Fortunately, considering the dreadful political implications of this "constitutionally outrageous" action in what was once Europe's most stable democracy, there is also a decent chance that Johnson's quasi-dictatorial behaviour will provoke a rapid parliam\entary backlash that ends his political career.

Anatole Kaletsky is Chief Economist and Co-Chairman of Gavekal Dragonomics and the author of Capitalism 4.0: The Birth of a New Economy in the Aftermath of Crisis.