Why inequality is insidious 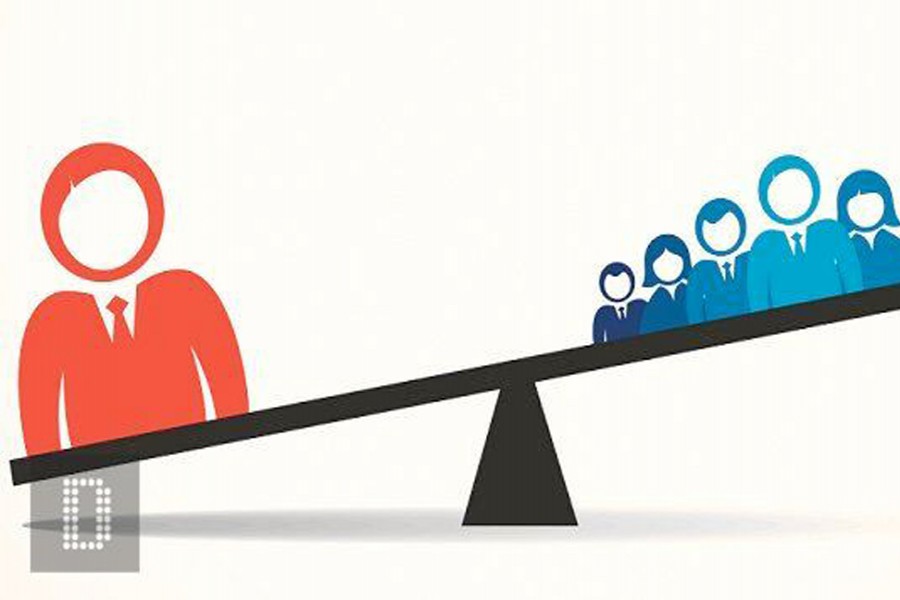 In a seminar recently organised by Bangladesh Economic Association (BEA) speakers expressed concern at the growing inequality in the country, which was also the main theme of the event. Such concern has been aired in public for quite some time in different forums and through writing in newspapers. All who participated in these exercises shared one thing in common, the view that inequality is bad. But very few have cared to explain why inequality is unacceptable, thus making it appear as a normative issue. The simple argument seems to be based on the principle that equality being good, inequality must be bad. There is a moral ring to the assertion. But inequality is more than a moral issue. It is not, therefore, enough to point out that inequality has deteriorated over time because Gini Co-efficient has moved higher from 0.41 to 0.48 in Bangladesh in recent years. The unacceptability of inequality condition should be shown through its impact on the economy, using appropriate terms and concepts. Strangely, such a common sense analysis is often absent when the subject is discussed with passion and righteous indignation.

First of all, it has to be understood that inequality is the outcome of a particular dispensation of political economy. Inequality of income takes place because of particular functioning in the economy that is given support, tacitly or overtly, by a government. As the Nobel laureate Joseph Stiglitz pointed out, "The failures in politics and economics are related, and they reinforce each other. A political system that amplifies voice of the wealthy provides ample opportunity for laws and regulations - and the administration of them - to be designed in ways that not only fail to protect the ordinary citizen against the wealthy but also further enrich the wealthy at the expense of the rest of the society" (Price of Inequality, 2012). It follows from this that inequality engendered by politics through explicit policy measures (or lack of counter-measures) of a government not only becomes firmly entrenched, but more importantly, provides the basis for manipulation of such policies on a continuing basis. In the process, it has a multiplier effect on the economy making status quo almost irreversible. Politics, as the handmaiden of the rich and wealthy, becomes the arbiter of income distribution among different classes, accentuating rich-poor divide. Plutocracy, rule by the few rich, replaces or in many cases prevents genuine democracy from taking roots, making it impossible for the economy to function for the "greatest good of the greatest number". The breakdown of the social contract in the polity caused by this makes justice, fair play, equal opportunity, competition and provision of social safety net almost unattainable. This is the price that a nation has to pay for economic inequality and it creates not only an unjust society but also potentially an unstable polity. The irony is, those adversely affected are not given the opportunity to make a choice between the outcomes of a regulated and an unregulated economy. The rich and wealthy, on the other hand, remain complacent because of short-term gains. Unfortunately, impact of inequality on political dispensation and governance is not normally highlighted in discussions and popular writing on the subject.

So, the first conclusion should be that inequality is bad because it has a deleterious impact on politics and governance making democracy an instrument for manipulating the economy by the few. If the political system is already captured by the rich and the wealthy it becomes difficult to reverse the system because of the stranglehold by the plutocrats and the economy functions for mostly the benefit of the few. The vicious circle created by inequality has to be analysed going beyond the simplistic discussion on the deterioration of Gini Co-efficient.

If inequality is bad for the blossoming of representative (representing the majority) democracy, its harmful effects on economy is even more critical and far-reaching. The rich and the wealthy, as they gain in income and wealth under conditions of inequality, change their consumption pattern. Demand for food and basic items dwindle after some time as the rich switch over to more luxurious items. As they own bulk of national wealth and have a disproportionate share of income, decline in their demand for basic need items like food, clothing etc. leads to reduced production and supply of the same. The resultant scarcity and high prices not only causes suffering and deprivation of the majority of consumers, contribution to gross domestic product (GDP) by basic needs items also declines. This can have a lasting impact on the growth of an economy. On the other hand, the demand for luxury items by the rich fuelled by inequitable distribution of income leads to either import of the same at great expense of national exchequer or overseas expenditure by the rich to satisfy their higher standard of living. Transfer of idle money of the rich to safe havens abroad is a common instance in many countries where inequality of income becomes chronic. The sum total of these developments in the economy causes slow growth of national income. The rich may earn less in future because of this but it is the benefit in the short run that motivates them most.

Another insidious outcome of inequality is what Prof. Stiglitz has called `trickle down behaviour.' It has been pointed out by him how those below the higher income earners can frantically try to emulate the life style of the rich because of the social pressure and in the process spend all their savings. Some may even resort to borrowing to `keep up with the Jonses.' This impact of inequality on the consumption pattern of the middle class is not conducive to balanced growth of an economy. This too, needs mentioning in any discussion on inequality.

After some time, the rich may have no motive to invest their savings in domestic economy. As a result the investable surplus that they have because of inequality may be transferred abroad for investment in real estate or in gilt-edged securities and stocks offering higher returns. Flight of capital under conditions of inequality that takes place deprives an economy of necessary investment fund. This phenomenon has become too common to need emphasis.

Another harmful effect of inequality is that it leads to stress and anxiety that hamper acquisition of new skills and training by new entrants to the employment market. In most cases this also happens because of lack of equal opportunity for higher education by those who do not belong to the class of higher income earners and the wealthy. When this happens, productivity increase in the economy inevitably suffers. This, too, has to be taken into account as one of the harmful effects of economic inequality.

In most cases, inequality is the result of rent-seeking. In its simplest form, rent-seeking is payment of economic rewards to an individual or a group over and above what is necessary for production or delivery of a product or service. By this definition, rent-seeking involves waste of resources that could be used for higher productivity. Rent-seeking that aggravates inequality distorts the normal functioning of the economy. In a situation where this is pervasive and chronic, prices of goods and services become higher causing hardship to consumers belonging to the middle class and the poor.

The above is a brief discussion of some of the insidious effects of inequality affecting the welfare of the majority and constraining growth of an economy. It is not necessary to have an exhaustive enumeration of the adverse effects to make the point that inequality is harmful for the economy. To make out a strong case against inequality it should suffice to highlight the major effects that adversely affect the majority of population and slow down economic growth. Simply saying that inequality is bad does not achieve that.