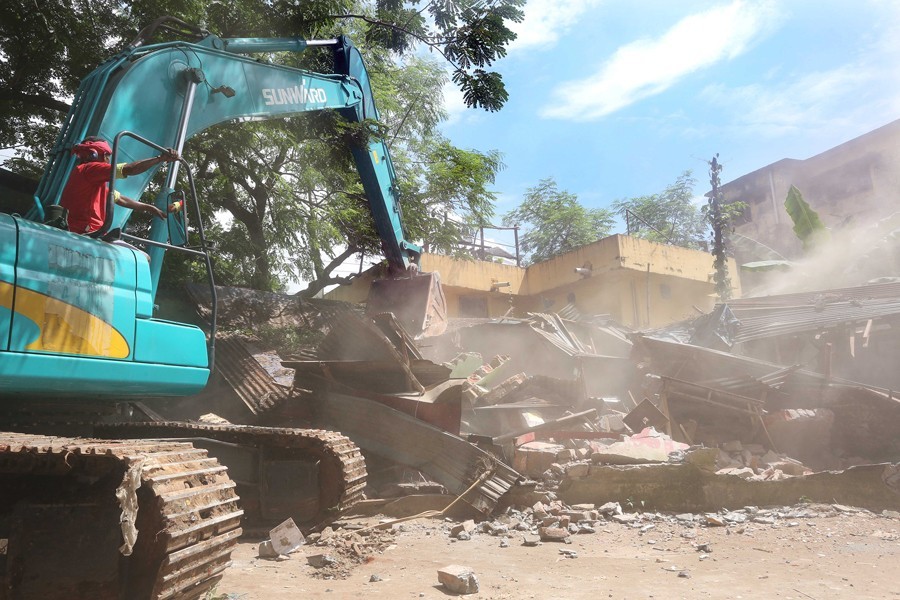 The Bangladesh Railway (BR) has started an eviction drive against illegal occupiers of its land from Tuesday last. On the first day, the BR demolished 250 structures, including residential buildings, houses, shops etc.; at the Shajahanpur railway colony. Former railway minister Mujibul Haque told parliament in June, 2016 that out of 61,820.97 acres of its land, 4,400 acres were under illegal occupation. He also added that 185.25 acres were freed from illegal occupation between July 2015 and May 2016 and 12,504.41 acres of its land were left unused.

Now that the drive has been launched simultaneously in Dhaka, Sylhet and Mymensingh, the sense of purpose demonstrated is clearly evident. If the drive is conducted in phases and allowed to culminate in a logical end, there is no reason why the illegally occupied land cannot be recovered from the encroachers. However, the problem here is that post-eviction follow-up is either totally absent or so weak that the freed land is either occupied once again overnight or the effort peters out in a typically slow but sure pattern.

Let it be noted here that the Bangladesh Inland Water Transport Authority (BIWTA) has also been conducting a massive drive against illegal occupiers on the banks of the rivers girdling the capital city. This time it gave the impression that no political clout could deter the drive from pulling down structures built by quarters irrespective of their political allegiance. The message from the top leadership of the government was clear and the teams conducting the drive had no hesitation to go about their business.

Now comes the turn of the Dhaka North City Corporation (DNCC) to free roads and land from illegal occupiers and grabbers. Its drive was supposed to start from today but it has decided to begin it from Sunday next. Whether the Dhaka South City Corporation (DSCC) will follow suit is yet to be known. But people can remember its drive about a year ago in which the footpath vendors were given an ultimatum and then forced out. For quite sometime, the footpaths in the area returned to pedestrians but unsurprisingly it did not take long for the vendors to stage a comeback and recapture the vacated spots.

The fact is almost all eviction drives have remained a game of cat and mouse. Credit, however, goes to charismatic late Annisul Huq, predecessor of incumbent DNCC mayor Atiqul Islam, for his bold stand on eviction of the truck stand from Tejgaon and freeing parking stretches of long route buses from Shyamoli to Gabtoli. Some canals in DNCC and DSCC areas were also recovered from illegal occupation but the benefits of those laudable moves could not be sustained in most cases. Only the truck stand has not been recaptured but encroachment there on a small scale was once reported by a newspaper.

No denying the fact that all such drives begin with a bang only to end with a whimper. This newspaper reports that the areas where the DNCC conducted drives earlier were occupied the next day. The report mentions that north side of Ananda cinema hall, Mirpur1, Mirpur10, Gabtoli, Sonagaon Janapad, Gawsul Azam Sarak, Notun Bazar, Tejgaon industrial area, Mohakhali bus terminal, East Rampura, Progoti Sarani, Madhya Basabo traffic box and Bangla Motor have all been retaken by encroachers.

The futility of such drives, particularly in busy city areas could not be more conspicuous. Gulistan, Baitul Mukarram and Motijheel areas have brought the drives and their end results in sharp contrast. Clearly the nature of the encroached public spaces or lands varies from one to the other. Running temporary trade by occupying parts of footpath is one thing and setting up permanent structures or hazardous devices like gas ovens on it totally obstructing it is a different proposition. Again, construction of buildings or houses on illegally occupied lands for residential or any other purpose is a crime of graver nature.

Ideally, no one should be allowed to encroach upon public spaces creating hindrance to public movement but footpath vendors are not committing a serious crime. They have been forced to take to vending because they are unemployed. Their right to work has been curtailed by the existing socio-economic system. Rightly, they deserve some consideration. If alternative livelihood options could be there for them, they would most likely give up such an occupation fraught with risks and danger from elements in the open space.

So far as the lands recovered on river banks or along railway tracks or elsewhere, the drives fail because of a lack of plan for using those beneficially. Recovery of lands is not all; how those are put to maximum benefit to the agencies or the government is what decides the fate of the drive.

That the lands on the banks of the River Buriganga have been freed from encroachers time and again is a well documented fact. But why have the encroachers returned? It is because, the authorities failed to devise a plan with the lands. However, there is one shining example of how the recovered space can be put to good use. The Buriganga Eco-park and Shipping Museum on Dhaka-Narayanganj road can be considered an oasis in the chaos and pollution all around. Similar parks, walkways and flower gardens along the bank of the river could make a difference. The BR could as well follow this but it could do even better by constructing shopping malls and other such facilities for leasing out.