Warm clothes and the poor 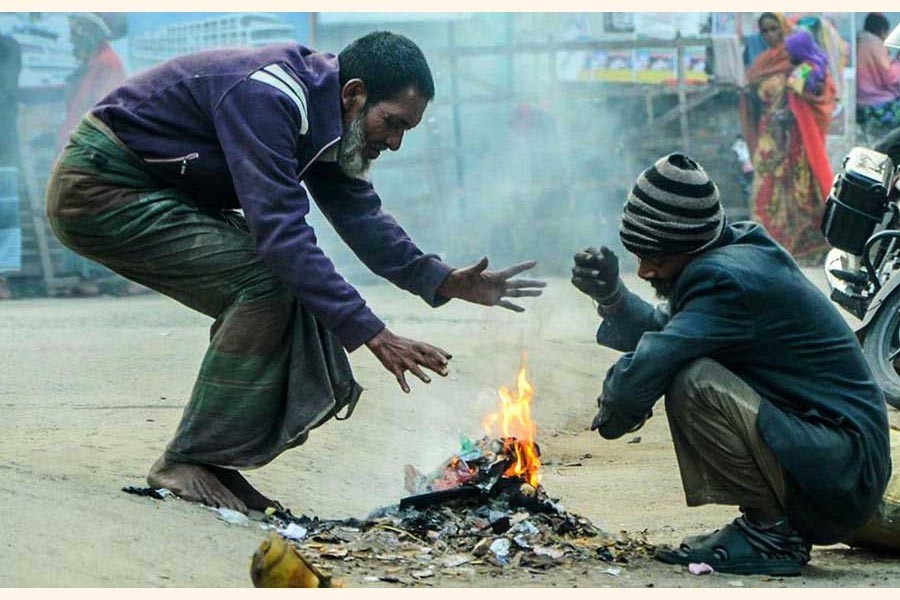 The winter has finally made its presence felt -and felt quite unerringly. Unannounced has it caught the city dwellers, many of whom complained of total absence of wintry symptom till the other day, off guard. The sceptics cannot be blamed for doubting the arrival of the winter in its chilliest form of long bygone years. For years the season has mostly eluded the city dwellers where temperature is four to five degrees higher than the average in the rest of the country.

Now those who complain that the winter lacks bites most certainly do not belong to the class with little to fight severe cold. Floating people and slum-dwellers do not afford the luxury of pining for a bone-jerking winter. This year's sudden arrival of the winter has come as a bane to people of low-income group. They have to stay outdoor -some of them till late hours at night-exposed to the hostile weather for their livelihood. Return to their shacks and shelters with hardly any modern amenities is no fun either.

Now how do they keep their body and soul together? They cannot afford costly warm clothes. One silver-lining is the ubiquitous abundance of footpath or street shops. Rejected garments articles are disposed of in bulk by factories and some buyers purchase those lots in auction. Then those find their ways to footpath or seasonal street vendors who display their wares on vans for a few hours in the evening. Either the street light or Chinese mini charger light is enough for the temporary market. Much cheaper, some of these warm vests and cardigans can at times deceive one because those are a copycat of the brand items.

However, even these warm wears are beyond the poorest people's reach. They look for far cheaper clothes. And here comes the imported variety of old warm clothes. The country that is an exporter of garments including warm types ranking second only to China surprisingly has to import such clothes to cater to a number of people. Once, even the middle-class people were compelled to procure such second-hand wears because the garments factories were still a long way off to flourish.

Now the country is poised to break into the lower middle-class category with its economy going fairly strong. But yet the country has not been able to do away with such second-hand items. In a country where reconditioned cars -ones that were used and after refurbishment exported mainly from Japan -comprise the bulk of the country's private transport pool, such a practice does not cause many an eyebrow to raise. But it should. And again, reconditioned cars and second-hand clothes do not fall in the same category.

However, both these not-so-elevating living styles could be dispensed with had the policy-makers taken right policy decisions. The cars that are imported as reconditioned are more costly than their brand new counterparts manufactured in India by the mother company in collaboration with local companies there.

Well, this argument is somewhat different in case of old warm clothes. Has anyone ever asked why some people of this soil still have to use imported winter old clothes? This is a clear sign that the country's growth paradigm and the pattern of distribution of benefits do remain convoluted. The indignity associated with import of old clothes and their indispensability for a segment of the people are proof enough that more needs to be done for the backward communities in society. Lip service will not do, nor will what goes in the name of a largesse under the safety network programme. People of all categories must have a decent income in order to live with dignity.