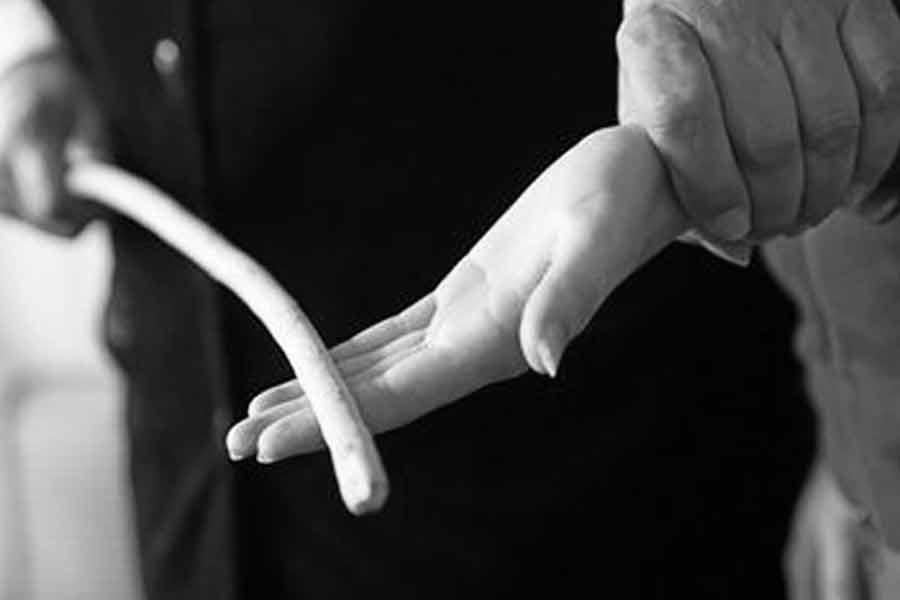 The UN Committee on the Rights of the Child, which oversees the Convention on the Rights of the Child, has defined corporal or physical punishment as "any punishment in which physical force is used and intends to cause some degree of pain or discomfort, however light". It mostly involves hitting (smacking, slapping, spanking) children with  hand or an implement (whip, stick, belt, shoe, wooden spoon or similar item), but can also involve kicking, shaking, or throwing children, scratching, pinching, biting, hair pulling or boxing ears, forcing children to remain in uncomfortable positions, burning, scalding, and forced ingestion. Non-physical punishments that usually accompany physical ones include belittling, humiliating, denigrating, scapegoating, threatening, scaring or ridiculing the child, which are also considered to be cruel and degrading.

Corporal punishment is in fact a violation of children's rights with regard to physical integrity and human dignity, health, growth, education, freedom from torture and other cruel, inhuman or degrading treatment cum punishment. The elimination of violence against children has been pledged in several targets of sustainable development goals (SDGs) declared by the UN. More specifically, the target 16.2 states: "End abuse, exploitation, trafficking and all forms of violence against and torture of children". Corporal punishment and associated harms can certainly be prevented through multi-sector and multifaceted approaches, which include: law reform; changing harmful norms surrounding grooming and punishment of children; parent and caregiver support; and school-based programmes.

The fact-sheet on corporal punishment and health released by World Health Organisation (WHO) in November 2021 presented a summary of various studies on corporal punishment of children across the globe. It pointed out that corporal or physical punishment is very much preventable, although about 60 per cent children belonging to the age-group '2 to 14 years' routinely endure such punishment at the hands of their parents or caregivers around the world. Interestingly, it has been found that the risks of corporal punishment are similar for boys and girls as well as for children coming from poorer and richer households. Evidences clearly demonstrate that such punishment exacerbates the child's behavioural problems over time and has no positive impact whatsoever on their growth. The malady has also been found to be linked to numerous negative outcomes for children including physical and mental ill-health, impaired cognitive cum socio-emotional growth, poor educational outcomes, increased aggression, and propensity to engage in violent acts.

In Bangladesh, a notification was issued by the Ministry of Education in 2011 that banned corporal punishment in educational institutions. But despite that, physical punishment could not be eliminated from schools till now. According to the 'Multiple Indicator Cluster Survey 2019' jointly conducted by Bangladesh Bureau of Statistics (BBS) and UNICEF, 89 per cent children belonging to the age-group of 1 to 14 years had endured corporal punishment during the previous month. And astonishingly, about 35 per cent parents still held the opinion that physical punishment should be meted out to children, although it has repeatedly proved to be an ineffective technique for making children learn. Instead, the children need love, understanding, and proper direction according to their age status for a holistic growth.

Statistics show that as many as 63 countries of the world have already enacted laws banning corporal punishment of children. But sadly, there is no such law in 87 countries including Bangladesh, although prevalence of such harmful acts tend to decline when there is a legal embargo against it. Such a law would undoubtedly wield a positive impact on the growth, education and welfare of children. Besides, its complete elimination is a must if Bangladesh is to achieve the SDGs as declared by the United Nations within 2030. A law should therefore be framed immediately for banning corporal punishment of children along with supporting rules, regulations, policies and programmes, and their implementation should be ensured through proper supervision. Side by side, steps should be taken for enhancing the skills of all stakeholders including parents, guardians, teachers and caregivers on proper grooming of children.

In a ruling on corporal punishment in schools during 2011, the High Court Division of the Supreme Court of Bangladesh called for prohibition of corporal punishment at home, and directed the government to consider amending the Children Act 1974 for making corporal punishment of children an offence for parents and employers. However, The Children Act 2013, which replaced the Children Act 1974, failed to materialise that objective. It includes the offence of cruelty against children (Section 70) for punishing "any person having the custody, charge or care of any child [who] assaults, abuses, neglects, forsakes, abandons unprotected, uses for personal services, or exposes in an obscene way such child and such assault, abuse, negligence, forsaking, abandonment, or the use in personal service causes unnecessary suffering or such injury to his health that it leads to loss of the child's eyesight or hearing or injury to any of limb or organ of the body and any mental derangement"; but it does not prohibit all corporal punishments of children.

At a dialogue organised by Bangladesh Legal Aid and Services Trust (BLAST), Save the Children in Bangladesh, and a local Bangla daily last year, experts urged the Government of Bangladesh to take an initiative for amending the Children Act 2013, by incorporating stringent provisions of jail-terms and fines for people who punish children physically or mentally in schools, families and other settings. This can be easily done by bringing about changes to Chapter-9 of the afore-mentioned law through banning cruel, inhuman, derogatory or abusive physical and mental torture of children, and by recognising these as punishable offences. The offences can be categorised as minor or major ones depending on their severity and impact. The penalties can range from jail-terms of different durations to fines of varying amounts.  Above all, a comprehensive social movement must be waged for curbing corporal punishment of children by involving all relevant stakeholders, including the teachers, parents, guardians, caregivers, health-workers, social elites, political leaders, and people at the helm of governance.