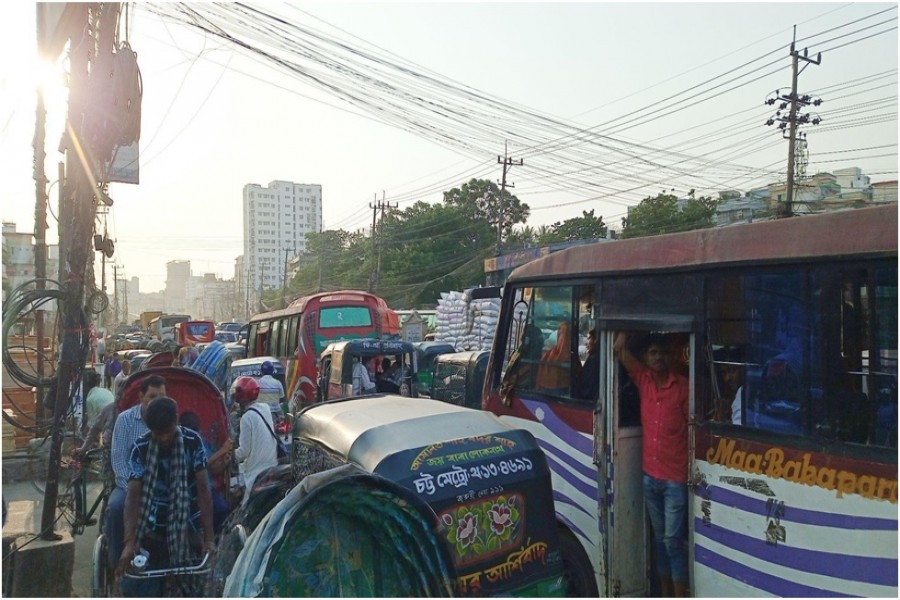 The number of private vehicles on the roads is increasing fast, but compared to that, public transport hasn't increased, and the quality of service hasn't improved.

Most of the registered vehicles plying on the road are covered with various personal vehicles. As a result, there's less public transport than required and more private vehicles are complicating the traffic management of important cities.

Despite the implementation of several development projects including road expansion and construction of flyovers, the intensity of traffic congestion seems to be increasing every day.

Not being able to reach the destination at the right time due to traffic congestion causes anxiety, frustration and depression. This creates immediate emotional stress in a person and has a negative impact on mental health which is reflected in the person's behaviour.

According to a study by the UK based company Zipjet, the capital Dhaka ranks seventh among the most stressful cities globally and first in Asia, due to daily traffic jams.

The recent listing of Dhaka as the most polluted city in the world shows the serious environmental pollution among the residents of Dhaka city.

The impact of traffic congestion is not only an economic loss but also a number of health risks have already been raised in various studies and surveys.

According to the Canadian Center for Drug Addiction and Mental Health (CDAMH), regular traffic jams increase the risk of mental instability by up to 3 times and the risk of depression by about 50 per cent.

And the annoyance of regular traffic jams increases the risk of family breakdown by about 50 per cent. Data from the horrific suffering of traffic jams match when the research survey revealed that the speed of a car per hour is less than the walking speed of a healthy person.

As a result of the vehicles being stuck in the same place for a long time, the polluted smoke circulate around the place and get concentrated because most vehicles keep the engin on.

In the process, people are exposed to severe pollution while sitting in traffic jams. Besides, the prevalence of dust on the roads due to various development projects is a serious concern.

The smoke that is usually emitted when the car is stuck in one place is called incomplete combustion. It contains various gases like carbon monoxide, dioxin, nitric oxide and sulfur oxide which reach human lungs causing serious damage.

Lead is particularly more damaging for children, as adults have strong immune systems that allow blood to reach the brain. This can impair the development of children's intelligence and cause nerve damage.

In addition, drivers have a tendency to blow their horns when they're stuck in traffic and if they suddenly get stuck. This causes hearing loss and various physical and mental health risks including loss of concentration in normal activities and high blood pressure.

The image of traffic congestion in Chittagong, the second biggest city in the country, is becoming more like Dhaka gradually. The number of unauthorised small vehicles has increased in the city due to the shortage of buses and minibuses.

As a result, people are suffering in many ways including waste of time, extra fare, uncomfortable rides and long time exposure to pollution.

In most cases, these vehicles carry almost twice the capacity of passengers with little space and narrow seats. Passengers are often seen hanging from the door in a risky manner.

The steps taken by the government so far to reduce traffic congestion are unstructured and scattered. This has proved the lack of planning and inefficiency of the people concerned.

The road didn't grow in comparison to the number of vehicles. And the failure of proper city planning makes it almost impossible to expand the roads.

Therefore, better public transport service seems the only solution ahead that would discourage people from using personal vehicles and relieve the road congestion.

The number of people in the city who rely on public transport is relatively higher than the number of private vehicle users.

Hence, experts have always urged to make a detailed plan to increase the number of public transports.

Simply put, one calculated measure can reduce the number of traffic on the road, resulting in lesser air and noise pollution, leading to less exposure in pollution, better health and productivity.