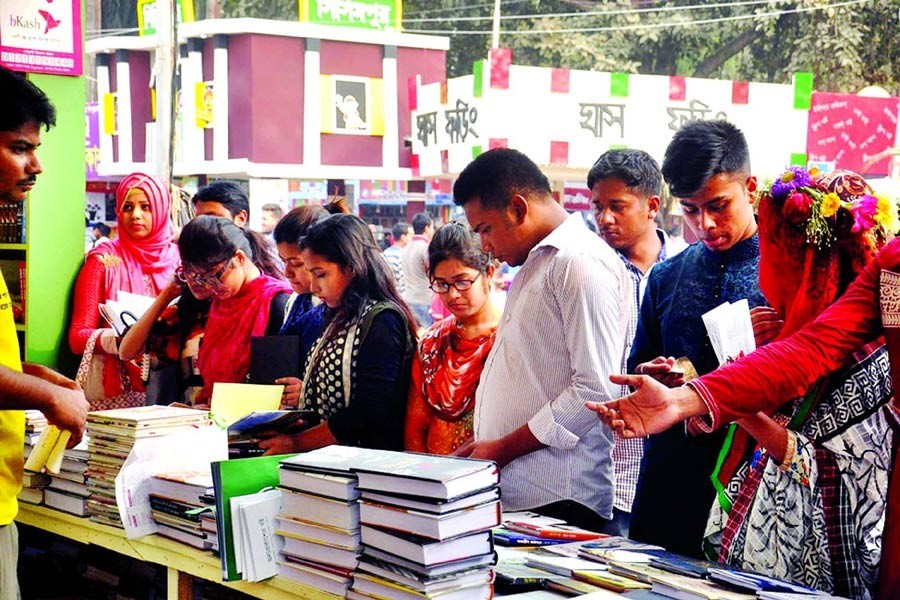 The coming Ekushey Book Fair in all probability is set to hit snags to an extent not seen during its 40-year journey which began formally in 1982. In the recent years, impediments to the holding of the fair came in many forms. Those were mainly confined to the 'time' or 'duration' of the fair, one of the largest in South Asia, the participation of stalls and pavilions, enlargement of the event and, finally, shifting its place. All these were soluble problems. The great damper that now looms over the national event is tied to a basic commercial ingredient --- paper. It's the very key to organising the fair satisfactorily with the participation of small and large stalls, compulsive book lovers and browsers. The news which was broken as a renowned publisher came online saying about this year's incredible price hike has nearly shell-shocked the book-related persons. The said publisher looked so disgruntled over the spectre of price rise of paper that he declared his inability to participate in the coming Ekushey Book Fair. He and his stall have been participating in the Bangla Academy Book Fair since 1988. His forte is creative and juvenile books. The noted publisher's decision to not participating in the fair is feared to prompt the others of his clan to take a similar decision. The result will be disastrous.

Coming to the price-rise of all grades of paper, the country's publication hub, Dhaka's Banglabazar sources have disclosed that the price of the product has increased by Tk 600 to Tk 700 per tonne in last week. The price of 62-gram paper has registered a jump to Tk 24,00 to 26,00 a tonne from Tk 11,00 to 12,00 in the same period. The price of 70-gram paper, the most widely used one for books, has reached Tk 3,200 from Tk 14,00 per tonne. On the other hand, the price of the exclusive 80-gram paper shot to Tk 3,500 to 4,000 per tonne from Tk 1600, and so on. Till now there have been few signs of the prices' coming down. From the economic angles, the paper price hike has a lot to do with the Russo-Ukraine armed conflicts, their fallout in the different raw materials' price-shooting which have been aggravated by sanctions. And also embargoes on product movements by ship. Few had thought that the present armed conflict-triggered crisis would hit a petty object like paper. In the last few months, it was the fuels, grain, various food items, baby food and medicines and their ingredients which remained on the forefront of shipments. As had been seen, paper and books were consigned to the bottom of the list. Yet the thirst for knowledge; and the imagination`s boundless flights couldn't be resisted. Thus billions of people around the world were looking to the return of the days of books. The question was who'd cater to their urges born in their inner recesses of the mind. Passing through an adverse time, Bangladeshi readers have been feeling the same way.

In such a critical situation, those who will be able to stay put may have one option before them: raising the books' prices in ones' own countries. The charged market of the veritably special commodity called books will detract much from the appeal and message of a book fair. Never before had the publishers targeting the Ekushey Book Fair been so morose, and filled with such a widespread gloom feared to fill the event. The Bangladesh publication sector had just started reaching a fledgling and professional phase. Yet it couldn't fully shake off its amateurism. Because there were a lot of publication outlets only the other day, who couldn't muster the courage to reject a writer's offer to monetarily help the later in bringing out their books. It is only recently that they have started feeling confident to bear all the expenses of a publication. The exorbitant rise in the paper price is set to hit the smaller and mid-size, and also the large reputed, publishers. On principle, they are not interested in publishing books financed by a writer in part or fully. At the same time, they are committed to bringing out books without any compromise, come what may in the forms of financial debacles. The Bangladesh publication sector has started showing great prospects before emerging as a professional one. The sharp rise in paper's price is feared to deal a great blow to the sector. And if it turns real this very year, its many-faceted domino effect may lead to a continuous bleeding phase on the part of the creative books' publication. There is a dichotomy. It begins with facilitating the publication of decent creative books. But it is at variance with the non-compromising publishers making publication of books real hard thanks to their upholding their principled position. They ought to soften their stance's rigidity. After all, book publication in many countries is considered a major commercial venture, especially in the literate countries where people cannot think of a life without books. Most of the people dread a life bound by straitjacket fiats. Books have never encouraged a life gagged or otherwise.

The price hike of various grades of paper used in publication has been a common phenomenon. Like the Eid festival-related articles, the prices of paper, printing ink, printing press and binding charges also register a phase of hikes. These are, normally, blamed on the machination of some invisible syndicates. After keeping the publishers, readers and writers on the tenterhooks for some time, the fear and anxieties usually die out. One hopes it happens in Bangladesh. The present year appears to be quite different. The anxieties and their impacts might overshadow the month-long fair this year. Already, many authors and publishers have expressed despair with an undertone of passivity. Given the signs of worse times three months prior to the start of the fair, a grim future stares the readers and publishers in the eye. Crises related to the unabated hikes in prices and services have been hitting the publication sector for years without respite. Yet the creative book publication sector has managed to weather the bad times before. Many hope they will not fail the passionate readers and book lovers this time as well. Despite their being busy with printing free textbook to be distributed from January 1, the higher authorities shouldn't turn a blind eye to the book fair.