Of newspapers, their apathetic readers & youths 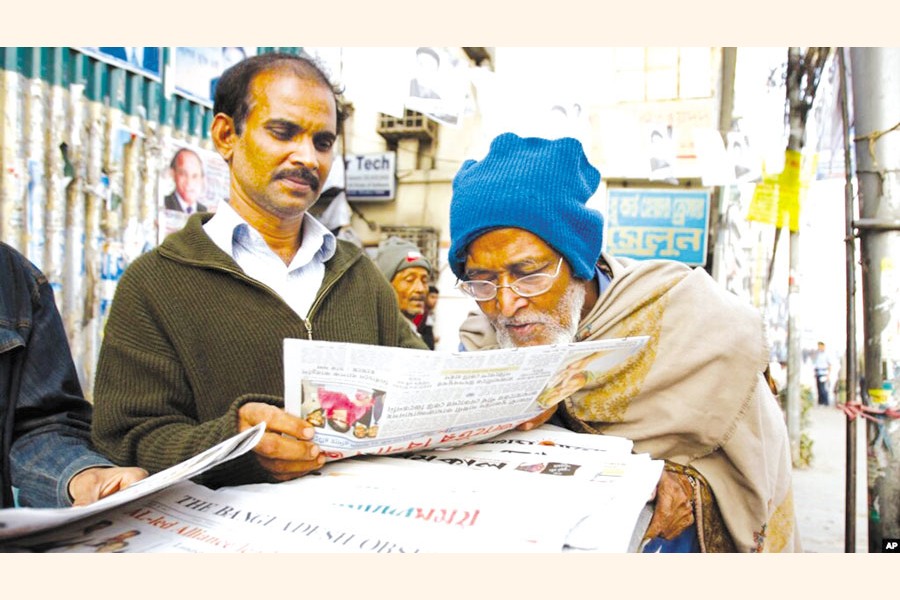 The average youths in the country no longer read newspapers as a habit. It's a striking development. This indifference to newspapers stems from their parental families. It may seem surprising, but many middle-class households have long stopped subscribing to papers. In the recent times, the phenomenon of cost cut during the post-corona pandemic fallout may have prompted many households to stop buying papers. But losing interest in newspapers has been found for many years among the country's urban youths. At this point, social observers may raise a vital question. By following this trait, youths may have started opting for shutting themselves off from the outside world and realities. It's a mystery why they prefer to remain busy with themselves in their narrow world. The youths include both male and female. Even around 20 years ago, the enlightened urban families would subscribe to at least one Bangla newspaper. The male parents eager to see their wards develop English writing skill at an early stage, would subscribe to an English paper beside the Bangla one. At the same time a few youths and teenagers would be found showing interest in the outside world through newspapers. In sharp contrast, a number of youths remained disinterested in the goings-on in their immediate surroundings. The places vary from their neighbourhoods to the city they live in.

These days, newspapers do not publish only news items. The dailies are filled with light and short pictorial features, in-depth commentaries, columns, along with others types of reading materials. Those who have developed the hereditary passion for reading are found engrossed in the newspapers for some time every day. It is unfortunate to find that reading habit is completely absent from many houses. The news that trickles in to them is through hearsay, TV news scrolls and the online news portals. Newspapers chiefly supply news, but they work differently on different readers. Due to their direct contact with the reader, they reach them without any convolution.

The trend of the youths to avoid newspapers continues to maim a vital segment of society. Not being updated on the current affairs, the younger generations run the risk of becoming myopic. A similar scenario could be encountered in the overseas countries. Average youths in those countries are reportedly less informed than those in the developing ones. The youths over there have a lot of outlets to pass time, other than newspapers. Moreover, they never feel bothered about the fact that they know so little about the world, unlike their contemporaries elsewhere. This knowledge gap is created by their being aloof from the news media. They do not read newspapers, nor watch the TV news channels, despite the presence of scores of media outlets. This apathy towards news among the youths has become a global phenomenon.

Turning to Bangladesh, developing the habit of newspaper reading is considered by pragmatic parents a stepping-stone to a fulfilling career. In the undivided Bengal, the college students used to be constantly urged by their parents to read the editorial of The Statesman published from Kolkata. To the parents in the 20th century's early to middle parts, learning the said newspaper's English style could facilitate a student's journey to a broader career. In Bangladesh, alongside the youths' apathy towards newspapers, a section of others are found spending their youth by choosing a career in journalism. These new-generation journalists have developed an unalloyed passion for this career. They join the profession to grow into newspaper owners, editors, senior and junior editors, reporters and some other categories of newsmen. Their love for journalism as profession is genuine, which could be seen in their willingness to stick to the uncertain profession. However, at one stage they begin feeling tired of the bitter realities like drop in advertisements, scant sells proceeds, and then bouts of losses. They can then realise that it was time they deserted their love.

Among others, these two classes who have apathy towards newspapers and who pick journalism as profession characterise the Bangladesh educated youths prominently. The ones who begin their career and finally settle in TV journalism comprise yet another sector. TV journalism's glamour and the facile and convenient style of work entices many a youth. The print-media newsmen are seen underrating the electronic media journalists. The former, too, have their reasons for being biased against the electronic media journalists. These disaffections, however, remain undisclosed. In the history of sub-continental journalism, rivalry between two media houses isn't new. In the neighbouring Indian state of West Bengal, the conflict between the Anandabazar and the Amritabazar houses had continued for several decades. Such rivalries have yet to vitiate the print media atmosphere in Bangladesh. In its not-too-short history of weekly and daily newspapers, the then East Bengal was able to build the semblance of a strong platform for its growth. Newspaper publication began in Dhaka with the 'Dhaka Prakash' in 1861. It was published and printed from a press in Babu Bazar in the then town. The editor was a descendant of the scientist Jagadish Chandra Bose. The newspaper continued up to the late 19th century. Earlier, in 1780, James Augustus Hicky published the Bengal Gazette, the first Bangla newspaper, a Bangla weekly, from Calcutta. Later, the British-ruled Calcutta saw another newspaper called Shomachar Dorpon, published from the city in 1818. It was in fact published by the Baptist Missionary Society in Calcutta. However, in terms of a complete Bangla daily, the name that comes inevitably is one of Sangbad Prabhakar. It first appeared in 1831 to continue for eight years, up to 1839. The daily was edited by Ishwarchandra Bidyasagar.

The first Bangla newpaper in the post-Partition East Bengal was the Paigam, published in Dhaka in 1947. It was followed by The Azad (1936-1992). One of the largest circulated daily of the time, the Azad shifted from Calcutta to Dhaka in 1948. With the Daily Azad being the pioneer of the Dhaka dailies, it drew over a dozen young staff-journalists from different parts of East Bengal. In fact after the shifting of Azad to East Bengal or East Pakistan in 1948, the newspapers that came out in the 1950s found in it a metaphorical pioneer. The newspaper had Mohammad Akram Khan as the founding-editor. It is also true the then East Pakistan province's new dailies soon discovered their new voice, separate from Daily Azad's. Although founded by Moulana Abdul Hamid Khan Bhashani, a homegrown leftist, and Yar Muhammad Khan, its editorial charge later went to Tofazzal Hossain Manik Mia, a liberal humanist. The later-generation journalists who emerged in independent Bangladesh are carrying the legacy of their great role-models --- which is humanity and the love for the motherland. Both budding journalists and those disillusioned today may look back to realise on which ideals their forefathers have toiled to give a shape to the country's journalism. Passionate newspaper readers are also included in this segment.

Major challenges for Bangladesh economy in 2023

Caught in a crucible of stress in a mega city

Of Dhaka's resilience: the endless saga

Inequality: reining in the 'beast'

LCs from third country: a new perspective for import?

Economic dynamics that need to be monitored in 2023