Nexus between wars and epidemics in terms of casualties 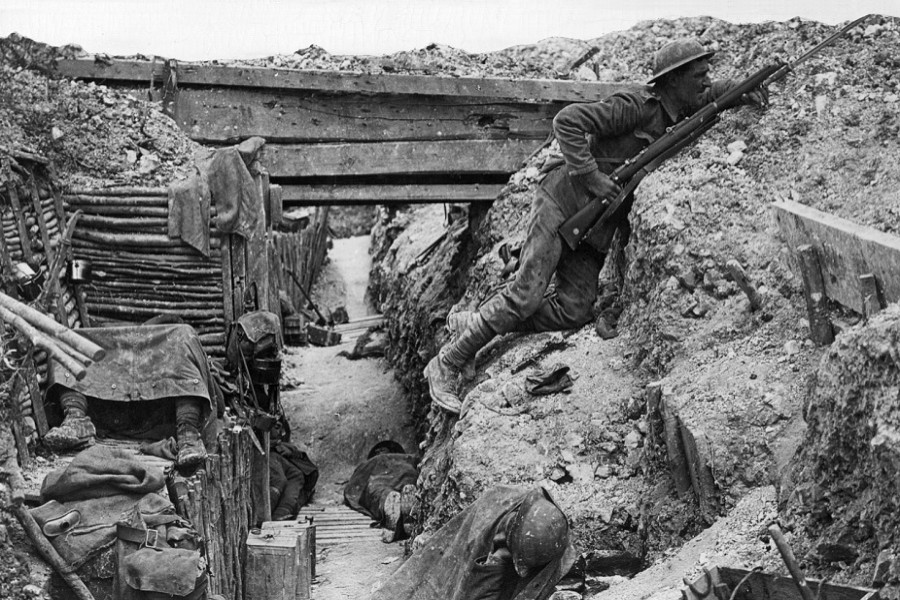 World War I claimed an estimated 16 million lives. Hard as it is to believe, the answer is true. The deadly influenza epidemic of 1918 killed more people than in World War I. The influenza epidemic that swept the world killed an estimated 100 million people. One fifth of the world's population, i.e., 380 million was attacked by the deadly virus. Within months, it had killed more people than any other illness in recorded history. The flue called Spanish flu was the deadliest pandemic in history. Scientists still struggle to explain what caused it.

One hundred years ago this month, just as the first world war was drawing to a fitful close, an influenza virus unlike any before swept across the British Isles, felling soldiers and civilians alike. One of the first casualties was the British prime minister and war leader, David Lloyd George.

The pandemic emerged in two phases. In late spring of 1918, the first phase, known as the "three-day fever," appeared without warning. Few deaths were reported. Victims recovered after a few days. When the disease surfaced again that Fall, it was far more severe. Scientists, doctors, and health officials could not identify this disease which was striking so fast and so viciously, eluding treatment and defying control. It was rampant in urban and rural areas, from the densely populated East coast to the remotest parts of Alaska. Young adults, usually unaffected by these types of infectious diseases, were among the hardest hit groups along with the elderly and young children. The flu afflicted over 25 per cent of the U.S. population. In one year, the average life expectancy in the United States dropped by 12 years.

It is an oddity of history that the influenza epidemic of 1918 has been overlooked in the teachings of American history. Documentation of the disease is ample, as shown in the records selected from the holdings of the National Archives. Exhibiting these documents helps the epidemic take its rightful place as a major disaster in world history.

WORLD WAR II DEATHS: World War II was a war that spanned from 1939 to 1945. More than 100 million people from over 30 nations participated in the war. During World War II, most nations of the world were divided between two different military alliances known as the Axis and the Allies. One of the things that stands out most about this war is the number of casualties. Millions of civilians and members of the military were killed in this war --the deadliest global war in history.

An estimated total of 70-85 million people perished, which was about 3.0 per cent of the 1940 world population (est. 2.3 billion). Deaths directly caused by the war (including military and civilians) are estimated at 50-56 million, while there were an additional estimated 19 to 28 million deaths from war-related disease and famine. Surprisingly, more civilians died as a result of the war.

Civilian deaths totaled 50-55 million. Military deaths from all causes totalled 21-25 million, including deaths in captivity of about 5.0 million prisoners of war. More than half of the total number of casualties are accounted for by the dead of the Republic of China and the Soviet Union. The government of the Russian Federation in the 1990s published an estimate of USSR losses at 26.6 million, including 8.0 to 9.0 million due to famine and disease. These losses are for the territory of the USSR in the borders of 1946-1991, including territories annexed in 1939-40. The People's Republic of China, as of 2005, estimated the number of Chinese casualties in the Second Sino-Japanese War from 1937 to 1945 as 20 million dead and 15 million wounded.

Data show that the now-defunct Soviet Union had the highest number of WWII casualties. As many as 27 million people died. Broken down, this results in as many as 11.4 million military deaths, up to 10 million civilian deaths due to military activity, and an additional 8 million to 9 million deaths due to famine and disease. More than 14 million members of the Soviet Union's military were wounded as a result of the war.

China also saw a large number of casualties because of its involvement in the war. As many as 20 million people died in China, including up to 3.75 million military deaths and as many as 18.19 million civilian deaths. In third place is Germany, which had up to 7.4 million casualties as a result of the war. While these three nations saw the highest number of casualties, other countries also lost millions of civilians and military members.

COVID19 WILL INFECT HALF OF GLOBAL POPULATION: The novel coronavirus (COVID19) will infect half of the global population and have a fatality rate of up to 3.0 per cent, analysts said. "We assume that the virus will infect around 50 per cent of the world population; 20 per cent of the cases will be severe, and 1-3 per cent will result in deaths," analysts from the Economist Intelligence Unit (EIU) said in a note. As a result of the pandemic, the EIU predicted global growth would stand at just 1.0 per cent in 2020 - down from its outlook of 2.3 per cent before the outbreak began. It would mark the lowest rate in global gross domestic product (GDP) growth since the global financial crisis.

As of March 24, cases of COVID-19 are about 382,366, with about 16,568 people killed; and more than 102,505 people around the world have recovered from the virus, according to Worldometer. "Death ratios will depend on the capacity of countries to effectively detect, track, and contain the epidemic," EIU analysts said.

In a major Chinese study on the coronavirus published last month, scientists calculated an overall fatality rate of 2.3 per cent. Meanwhile, Italy - the hardest-hit country outside of Asia - has surpassed China with 3,405 deaths out of 41,000 confirmed cases till writing this report.  The EIU also warned that the coronavirus "will become a seasonal disease, with another outbreak in Winter 2020/21," with analysts adding that they did not expect a vaccine to come onto the market until at least the end of next year.

Human trials of a COVID-19 vaccine began in the U.S. on Monday, with several big biotech firms racing to develop an immunisation for the virus. However, experts have warned it would take at least a year for any new vaccination to be rolled out to market.

COVID-19 HEAVY CASUALTIES IN USA AND UK: The Imperial College COVID-19 Response Team has published a report on epidemiolocal modeling of non-pharmaceutical interventions (NPIs) to reduce COVID-19 cases and deaths and the demand for healthcare.

While our understanding of infectious diseases and their prevention is now very different compared to that in 1918, most of the countries across the world face the same challenge today with COVID-19, a virus with comparable lethality to H1N1 influenza in 1918, say experts. Two fundamental strategies are possible:

(a) Suppression: Here the aim is to eliminate human-to-human transmission. The main challenge of this approach is that NPIs (and drugs, if available) need to be maintained - at least intermittently -- for as long as the virus is circulating in the human population, or until a vaccine becomes available.

(b) Mitigation: Here the aim is to use NPIs (and vaccines or drugs, if available) not to interrupt transmission completely, but to reduce the health impact of the epidemic, akin to the strategy adopted by some U.S. cities in 1918, and by the world more generally in the 1957, 1968 and 2009 influenza pandemics. In the 2009 pandemic, for instance, early supplies of vaccine were targeted at individuals with pre-existing medical conditions which put them at risk of more severe disease. In this scenario, population immunity builds up through the epidemic, leading to an eventual rapid decline in case numbers and transmission dropping to low levels.

Analyses of data from China as well as data from those returning on repatriation flights suggest that 40-50 per cent of infections were not identified as cases. In the (unlikely) absence of any control measures or spontaneous changes in individual behaviour, it is expected a peak in mortality (daily deaths) to occur after approximately 3 months. In such a scenario, it has been predicted that 81 per cent of UK and U.S. populations would be infected over the course of the epidemic.

The epidemic is predicted to be broader in the U.S. than in UK and to peak slightly later. This is due to the larger geographic scale of the U.S., resulting in more distinctly localised epidemics across states than seen across the UK. The higher peak in mortality in UK is due to the smaller size of the country and its older population compared with the U.S. In total, in an unmitigated epidemic, it is predicted that approximately 510,000 deaths in UK and 2.2 million in the U.S., not accounting for the potential negative effects of health systems being overwhelmed on mortality.

Protecting biodiversity for the future

The big failure of small government

How capital market can help in facing corona crisis in Bangladesh