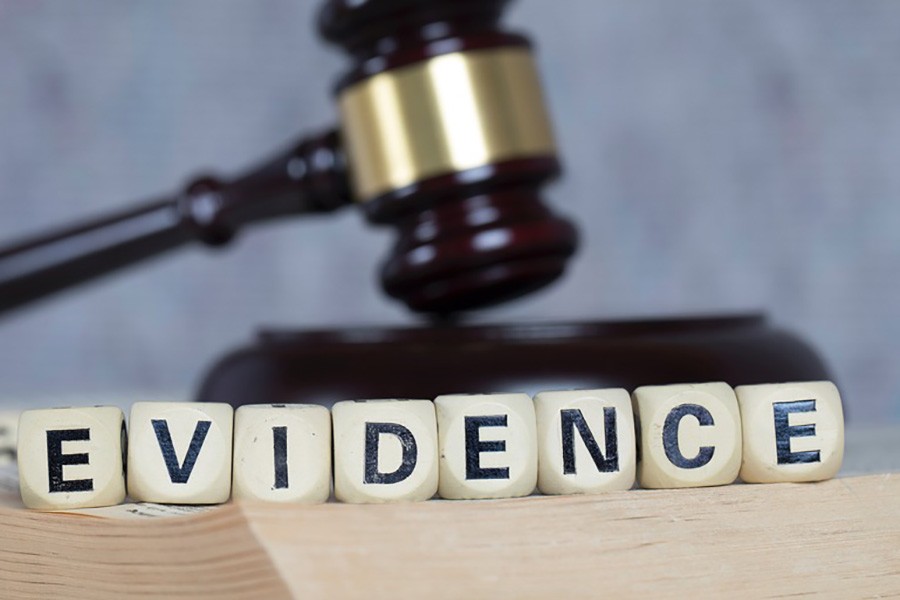 Although the origin of evidential procedures can be traced from the period of ancient Hindu to ancient Muslim and British India, it was not codified into a piece of legislation until 1872, in the British  period, by Sir James Fitz James Stephen as the 'Evidence Act, 1872'. According to Section 3 of the Act, the definition of evidence comprises oral evidence by witness upon inquiry before the court and documentary evidence produced before the court for inspection.

The law of evidence in Bangladesh has remained the same as it was  in 1872, although the British themselves have long amended their piece of creation in significant areas to harmonise with the evolving society. There are several outdated and questionable aspects in the evidence law. For instance, section 45 of the Evidence Act, 1872, contains the provision of forensic law stating that if the court opines the necessity of forensic law to form an opinion as to determine the fact of science or art or handwriting identification or finger impression etc., then the court may summon the assistance of specially skilled person/s in that particular field of forensic. This is what the law of forensic is all about in the evidence law of Bangladesh.

It is indeed unfortunate that while the world is adopting different means of upgraded technologies in the field of forensic to obtain  precise results, Bangladesh, so far, has not been able to make any progress in the forensic law and is largely dependent on so-called experts, whose credibility is almost non-existent up until now. The reason behind this is the absence of forensic rules prescribing methods of collecting and preserving forensic evidence following correct forensic procedures and training our law enforcing forces and lawyers and judges to make accurate use of them. Although attempts have been made to collect DNA and create database through the Deoxyribonucleic Acid (DNA) Act 2014, it never came into application.

Section 155 (4) of the Evidence Act, 1872 which provides that when a man is prosecuted for rape, it may be shown that the complainant was of immoral character, therefore raising the question of the victim's character as a justification of rape. This has been criticised heavily for not upholding equality and special protection for women as guaranteed by the Constitution of Bangladesh itself. This outdated, patriarchal and unethical provision of this section is affecting victims of rape because the supposedly immoral character of the victim is being used as a tool of presumption of consent in case of rape. If looked into the original source of the emergence of such rash law, it can be seen that the UK has amended this provision from time to time and in 1999 through 'Youth Justice and Criminal Evidence Act' has completely prohibited taking account of complainant's character as evidence. Moreover, even our neighbouring country India in 2003 deleted the clause and prohibited raising the issue of complainant's character in cross-examination. Section 146 provides that during cross examination, a witness may be asked any question which tends to "shake his credit, by injuring his character".

It is also important to make necessary changes in the Code of Criminal Procedure so that in-camera trials or trials conducted in private can be made mandatory for cases of rape or other sexual offences. Such provisions would ensure privacy of the victim and the prosecution witnesses, and may have a positive impact in earning the confidence of a woman facing sexual violence to take resort to the court. Section 352 of the Code of Criminal Procedure (CRPC), which authorises a court for the trial of offences with public access during the trial procedure, may consider an exception to be added which would make in-camera trial for sexual offences mandatory. Section 327 of the Code of Criminal Procedure 1973 in India can be a learning example where a provision has been added making in-camera trials of sexual offences mandatory. Although under section 352 of our CRPC as well as under section 9(6) of the Nari-o-Shishu Nirjatan Daman Ain, 2000, provisions have been made where the court may conduct in-camera trial, such provisions are not mandatory and are subject to application of a party or initiative of the court itself.

Laws such as the 'Information and Communication Technology (ICT) Act, 2006' (amended in 2013) and the Digital Security Act 2018 etc., have been passed to redress wrongdoings in digital electronic media but no amendment has been done on the main law for evidence procedure, the Evidence Act, 1872, to incorporate provision of digital evidence despite the fact that Bangladesh is no longer less advanced in technology.

There is thus a definite need to review the various provisions of the Evidence Act in order that these could be rendered more rational and practical-oriented as well as compatible with the changed time.

Md. Mahmudul Islam Shakil is an apprentice lawyer and an LL.M. student at Department of Law, North South University.

The Biden presidency: America is Back

When the Commander-in-Chief becomes Insurrection Chief

The future of banking is not digital but invisible