Macron and the future socio-political cycle 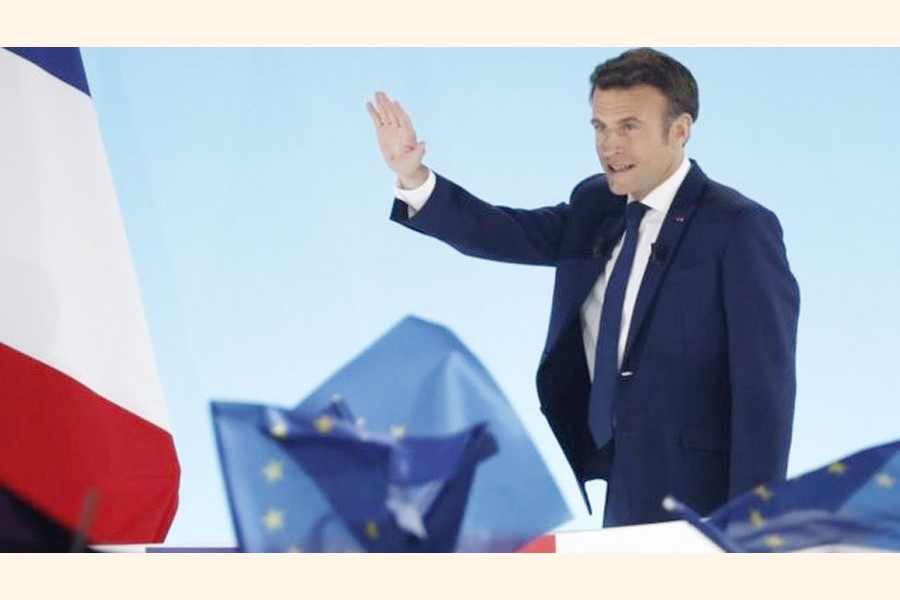 Professor Mathias Bernard has made a significant observation: "although Le Pen has lost again, voting for a far-right candidate is no longer seen as unacceptable in France". Quite correctly, the French election must give Emmanuel Macron pause for thought. It is clear from Katya Adler's comment that this time once again, the concerted public effort to keep a right-wing nationalist candidate from becoming the French President is no longer as evident as before.

Macron, France's youngest leader since Napoleon won the first round of the election two weeks before the final round held in the fourth week of April. He had to face 12 candidates during the first round but then ended up in the final round against Le Pen--  three-time aspirant to become the nation's first female President. It may be recalled that in 2017 during the last election Macron had defeated Le Pen by a margin of 66.1 per cent to 33.9 per cent votes. However, this time in 2022, it was  58.5 pe cent to  41.5 per cent. Emmanuel Macron has achieved something no other French president has achieved before-- winning re-election while still being in charge of his own government.

Voters simply opted, in these challenging times, for a safe middle ground rather than a firebrand far-right candidate who promised to rip up the economy and society and pivot France ever closer to Russia.

David A. Andelman of CNN has also suggested that the size of Macron's margin, despite the high abstention rate -- the highest in at least two decades -- could give him a substantial boost toward a definitive majority in the National Assembly-- after elections that will be held soon to fill its 577 seats in June.

Paul Kirby has however pointed out that politically, if he fares badly in the June elections, he could end up losing his majority and may not be able to form his own government. As such, his opponents are calling the next vote a "third round". Many of the voters who supported him in April are not natural supporters and may not back him in June. Analysts have indicated that a big number of far-left voters, Greens and Socialists who supported him to keep the far right out of power, might not do so in June.

There are differences of opinion amongst strategic analysts but many agree that after the final round, at least for the moment, the French people might not really be seeking to change all that much within their country where a government has served them reasonably well. Some are also pointing out that this latest scenario will provide Macron the possibility of assuming general leadership of Europe, filling the vacuum created last year, with the departure of long time German Chancellor Angela Merkel from the international platform. European Union leaders rushed to applaud him after his victory.

The European Commission President,  the European Council President, the Spanish, Italian and Portuguese Prime Ministers and German Chancellor Olaf Scholz not only congratulated Macron, but reiterated that his victory was a vote of confidence for Europe. British Prime Minister Boris Johnson also congratulated Macron on his re-election as France, according to him, was "one of our closest and most important allies." The United States also said that it expects close cooperation with Macron, with Secretary of State Antony Blinken saying in a tweet: "We look forward to continuing close cooperation with France on global challenges, underpinning our long and enduring Alliance and friendship."

In his victory speech Macron admitted that the latest electoral process had underlined that France today was a divided country. However, he re-affirmed that as President he would try his best to heal those divisions. Nevertheless, he knows that such an effort will not be easy.

Within days, he needs to form a new government. Labour Minister Elisabeth Borne is being seen as a popular choice, because she has a strong record on social issues and it is social reforms that are his priority right now. Indeed, within hours of the election result, Finance Minister Bruno Le Maire promised to keep in place a price cap on gas and electricity until the end of 2022. But spending is just one of four priorities Macron needs to push in the coming weeks according to Junior Economy Minister Agnès Pannier-Runacher.

The first looming challenge will be to garner a healthy majority in parliamentary elections next month.

Five years ago, when he first became President, he had promised to neither favour the political right nor the left. He had affirmed that he would be socially just in his efforts to kick-start the economy. However, as we all know, the COVID pandemic and the economic downturn created by Russia's invasion of Ukraine have all contributed to severe difficulties for Europe including France. In addition, there has also been a steady growth of pressure due to the growing prominence of traditional right and far-right public concerns about- immigration and law and order.

In addition, it would only be correct to also point out that in addition to fragmentation based on party lines (which is true all over the world) France today is also polarised between wealthy urban centres (like Paris) and the rural regions. Socio-economists have also underlined that there exists a divide between nationalists and internationalists and also between the wealthy, poor and the marginalised. This connotation related to Macron's alleged failure in his first term as President has also been referred to with regard to his Administration's inability to have been able to assure rules of legal process related to social justice and environmental reforms.

Few doubt that Le Pen is a passionate Eurosceptic. Macron, on the other hand is a huge EU-enthusiast whose campaign team handed out EU flags alongside election pamphlets at his rallies. That symbolised the fact that though Macron might have been seen as a divisive figure of sorts within France, that was not the belief in Brussels who is held in esteem as an European leader.

Macron for quite some time has been proposing that Europe needs to be more independent in terms of food production, energy and defence. This has increased his popularity amongst EU leaders, particularly after Russia's intervention of Ukraine and the Covid-19 pandemic that have affected global supply chains. As the EU's second largest economy and only big military power -- now that the UK has left -- France has long played a leading role in Brussels and in NATO. On the other hand, Le Pen's historically close ties with Moscow and her intention to pull France out of NATO's military command has always worried US and European allies.

Andelman has also referred to the fact that Macron still has two more months as the titular leader of Europe in the rotating system that allows each EU country a six-month term. It is being hoped that during this period and subsequently he will be able to address important issues that have recently emerged in Eastern Europe as well as in the Middle East and Africa.

Within Europe there is the evolving issue of Finland and perhaps Sweden on the verge of seeking entry into NATO, and Ukraine, if possible, becoming a member of the European Union. At home, Macron will also have to carefully continue his efforts to control escalating inflation that is already requiring the European leadership to find a way out of the net impact created through energy sanctions arising out of the Ukraine crisis.

There is also the growing refugee issue because of the millions who have fled to adjacent countries in Europe-- Poland, Romania and the Czech Republic. It has been reported that France has already agreed to accept about 100,000 such refugees. This factor will in all likelihood enhance support for the extreme Right led by Le Pen- whose party has always opposed the entry into France of refugees from the Middle East as well as from the East through Turkey and Greece.

Beyond Europe, Macron will also have to play a central role in navigating France's widely underlined influence on the world stage.

In Africa, there have been multiplying coups lately from Mali to Chad and Burkina Faso, accompanied by deepening terrorist activities in former French colonies. It may be recalled that Macron was forced because of this development to withdraw military forces this year following scores of deaths in West Africa. Strategic analysts believe that after his re-election Macron will continue to seek a path forward, working with like-minded African leaders to prevent mercenaries from other countries filling the vacuum.

In the Middle East, Macron has already sought a reset with a host of countries where France has political clout and also growing commercial interests. This includes some Gulf nations that have become important purchasers of French military equipment and also the former French colony of Lebanon, which is afflicted by a massive political and economic crisis. Macron has sought to position France in the Middle East and broadly across the world as a staunch and reliable partner, in areas where a rearrangement away from traditional allies, particularly the United States, is underway.

In Asia, Macron is expected to try and play a leadership role aimed at finding an acceptable solution related to the increasingly weighed down relationship between the EU and China. It may be noted that the eagerness of both sides to expand trade has fallen afoul of alleged human rights abuses.

Macron knows that he is still faced with the challenge of moving forward with his broad menu of initiatives after the next national election in June when voters will choose a new National Assembly. Many of those arrayed against Macron in the presidential contest will be seeking to unseat the comfortable legislative majority he has enjoyed. In many respects, this vote could be of great long-term significance for Macron, France and its place in the world than the presidential race.