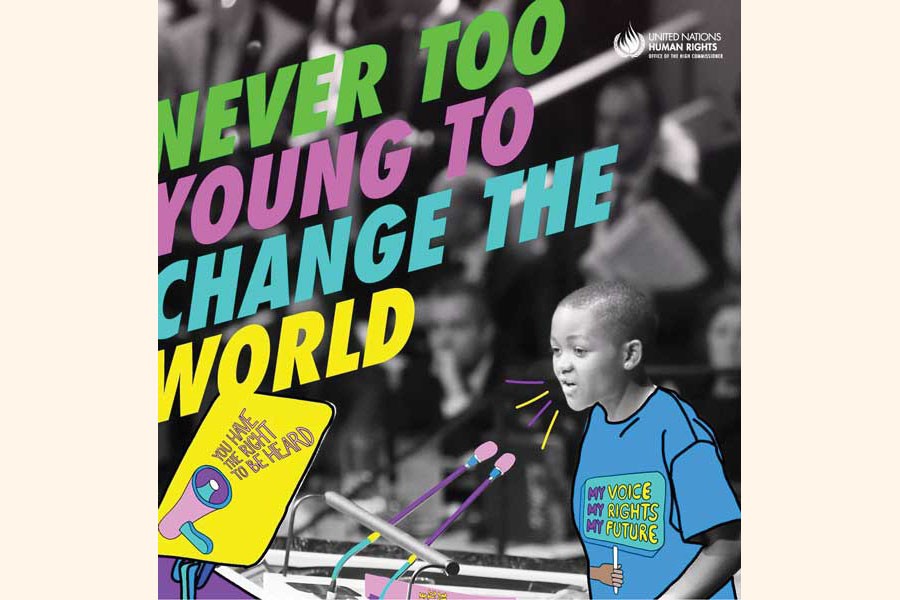 Human Rights Day was observed throughout the world on December 10. United Nations Secretary-General, António Guterres, in his message on Human Rights Day, 2019 said: "We celebrate the role of young people in bringing human rights to life. Globally, young people are marching, organising, and speaking out: for the right to a healthy environment…for the equal rights of women and girls to participate in decision-making…They are marching for their right to a future of peace, justice and equal opportunities. Every single person is entitled to all rights: civil, political, economic, social and cultural. …On this International Day, I call on everyone to support and protect young people who are standing up for human rights.''

UN High Commissioner for Human Rights Ms. Michelle Bachelet in her message on the Day said : "Raising our voices is essential to the creation of a future of peace, justice and sustainable development. I am inspired by the courage, clarity and principle of the women, men and young people who are rising up peacefully, to create greater freedom and justice. Their voices are the living expression of human rights - a movement that is fundamentally about building dignity and equality for everyone. Policy-makers everywhere need to listen to these calls. And in response, they need to shape more effective, more principled policies. We have a right to live free from discrimination on any grounds. We have a right to access education, health-care, economic opportunities and a decent standard of living. This is about our future, our livelihoods, our freedoms, our security and our environment. We need to mobilise across the world-peacefully and powerfully - to advance a world of rights, dignity and choice for everyone."

* "Bangladesh continues to have one of the highest rates of child marriage in the world. In spite of the government's stated pledge to end the practice by 2041, it has yet to make meaningful progress. A law remained on the books allowing girls to get married before the age of 18 under special circumstances. Authorities failed to properly enforce laws to protect women in cases of sexual violence, rape, domestic abuse, and acid attacks."

HUMAN RIGHTS EDUCATION: While human rights education (HRE) was mentioned in the  Universal Declaration of Human Rights (UDHR) adopted by the United Nations in 1948, there was little corresponding global action by governments or non-governmental organisations (NGOs) to address and encourage HRE.

In 1993, soon after the end of the Cold War, the UN held a World Conference on human rights in Vienna. The conference marked a turning-point for HRE, since it created the post of the United Nations High Commissioner for Human Rights, an office charged with education and public information related to human rights (HR). Further, the Vienna Conference Declaration and Programme of Action urged "all States and institutions to include human rights, humanitarian law, democracy and rule of law as subjects in the curricula of all learning institutions in formal and non-formal settings".

HR EDUCATION IN BANGLADESH: There was no mention of human rights education in the syllabus of school students in Bangladesh until 2013. The scenario changed since that year. Human rights issues, particularly the rights of children, women and senior citizens are now included in the school text-books of grade six and seven.  Needless to say, mere mention of human rights in text-books or issuance of government orders or enactment of laws alone can not ensure human rights in practice. For that a series of action programmes to help build mass awareness is very much required. The role of national leadership, teachers, parents, cultural activists and, of course, of the media is very vital. Attainment of functional literacy and life-long learning creates such congenial environment.

Let's uphold the conviction today that education and rights are inseparable. One supports the other. So, it is critically important to prioritise human rights education and follow the guidelines of the United Nations. The responsibility devolves both on the government and the governed. Good governance is the obligation of those who are at the helm of affairs or in government, and the citizens are to extend lawful support in accordance with the principles of the 1948 Universal Declaration of Human Rights. It is high time we realised the impact of human rights education and follow the good instances of far and near.