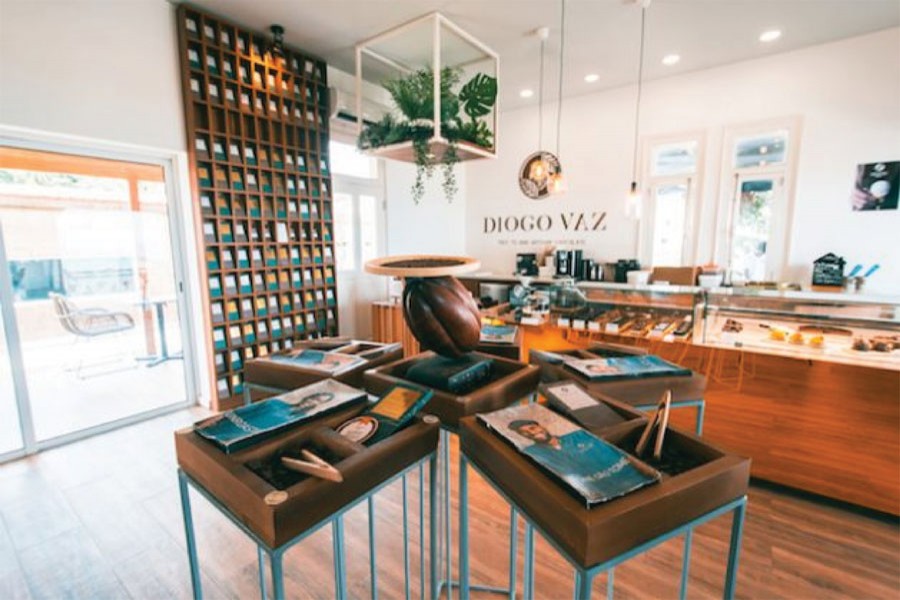 It produces 70 per cent of the world's cocoa and yet Africa has very little hand in making the final product - chocolate. But one producer in Sao Tome and Principe is on a drive to become a global brand for African chocolate.

A premium chocolate maker in São Tomé and Príncipe is on a drive to promote the taste for "made in Africa" chocolate, and tap into a $100 billion global indulgence associated with Valentine's Day.

Diogo Vaz, a company in the idyllic island of São Tomé and Príncipe in West Africa, is producing organic luxury chocolate from rare cocoa varieties. The objective is to promote Africa's palate for chocolate, a world-loved treat estimated to be enjoyed by one billion people every day.

"For centuries Africa has produced cocoa from wild beans but the consumption of chocolate is really low in Africa," Willy Mboukem, Plantation Director at  Diogo Vaz, told IPS in a telephone interview.

"Modern consumer habits are a challenge and we know in Africa we are not big consumers of chocolate. People do not have this habit and often buy expensive products with a lot of sugar and missing out of the real taste of chocolate with a higher percentage of cocoa."

Ivory Coast, Cameroon, Ghana and Nigeria produce 70 per cent of global cocoa but enjoy just five per cent of the global value from this market. Cocoa producers are unable to get more value from selling the raw material for chocolate to realise higher prices for farmers.

Worse still, many African cocoa producers have battled with adding value to their beans, - a process that would boost jobs and incomes - because they have little control on their value chains.

Emerging markets consultant Edward George says in an online paper that West Africa is the largest cocoa producer in the world but it exports 75 per cent of it as raw beans - a key ingredient in chocolate - giving the lion's share of value addition to confectioners and retailers at the end of the value chain.

George said that despite Africa's agricultural sector having many inbuilt advantages of abundant agricultural land, a rapidly-growing population and lower labour costs, it lacked an efficient marketing infrastructure.

This prevented farmers and processors from getting full value from their crop, even in its raw form. In addition, Africa's agriculture value chains were highly fragmented and face international competition.

George said a solution to poor value addition in Africa was to boost local demand for cash crops, within countries and regionally.

Last November, the African Development Bank (AfDB), Credit Suisse AG, the Industrial and Commercial Bank of China Limited and the Ghana Cocoa Board signed a $600-million loan to boost cocoa production in Ghana, the second-largest cocoa producer in the world.

The deal will be extended to other cocoa-producing countries in Africa, according to AfDB President Akinumwi Adesina. Adesina has long bemoaned the fact that Africa is not dominating the cocoa value chain, despite being the leading producer.

African farmers sweat, while others eat sweets. While the price of cocoa has hit an all-time low, profits of global manufacturers of chocolate have hit an all-time high…. It is time for Africa to move to the top of the global food value chain, through agro-industrialisation and adding value to all of what it produces," Adesina said at the Bank's Annual Meetings last year.

The AfDB is a strong supporter of agriculture value chains on the continent. The AfDB's Feed Africa Strategy (2016-2025) marked a shift by the bank towards approaching agriculture on the continent as a business. Agriculture is currently one of the top priorities for AfDB.

"Agriculture is the most important profession and business in the world," Adesina said last month when he was conferred with an honorary Doctorate of Science by the Federal University of Agriculture in Abeokuta, Nigeria.

CHOCOLATE VISIONS: Diogo Vaz has bucked the trend and is adding value to cocoa beans at source, a risk Mboukem says is paying off thanks to growing demand for high end chocolate in Europe and the United States.

The company operates a 420 hectare farm bought in 2013 which has been replanted with 150,000 cocoa trees, which include the unique Amelonado and Trinitario varieties endemic to São Tomé and Príncipe. The Portuguese introduced cocoa from Brazil to the island nation over 160 years ago.

Mboukem said Diogo Vaz was riding on the rich cocoa-growing history in São Tomé and Príncipe and is establishing itself as a global brand for chocolate. It currently exports bulk and tablet chocolate to France, Portugal and the Gambia. The company, which employs 250 people, exports 12 tonnes of fine chocolate every two months.

"We have looked at what the European and US market needs which is  low fat, low sugar organic chocolate with traceability," said Mboukem.  "We have maintained producing chocolate from different varieties of cocoa from the farm to factory. This project is an important page in the history of Africa to master the cocoa value chain."

It is, however, a luxury market item. "You sell units at high price and then you have a lot of different costs like the cost of packing is a big cost for us and then operational costs but chocolates, in general, is a profitable business and is huge all over the world especially in Europe, US, and Japan," he said.

Diogo Vaz holds public tastings and open factory tours to educate the community in São Tomé and Príncipe about chocolate making but importantly to understand the company's philosophy of making good chocolate through investing in the community.

"People say it is an African chocolate but the packaging and the way it's presented and the story behind makes them feel proud because it is 100 per cent African with international characteristics. They say

the chocolate is good and we have been making good chocolate, we've got a professional chocolatier."

CLIMATE CHANGE EATING CHOCOLATE? Weather extremes, a result of climate change, will lead to a fall in cocoa production by 2030, a 2011 study by the International Centre for Tropical Agriculture (CIAT) predicted.

Climate change, and the resultant change in the rainy seasons, Mboukem said, has forced Diogo Vaz to change production methods in terms planting the beans and the fermentation and grading process to retain the best quality.

Cocoa farming by over five million small holder farmers around the world, a bulk of them in Africa, supports more than 50 million people globally, according to the World Cocoa Foundation.

The International Cocoa Organisation (ICCO) says while the organic cocoa market is less than 0.5 per cent of the total global production, there is growing demand for organic cocoa products as consumers worry about food safely and the environmental footprint of food production.

"The future is to expand value addition of cocoa beans in Africa and transform the livelihoods of many people who depend on cocoa and ensure Africa enjoys real chocolate," Mboukem said.

How to design a lockdown

Happiness: Its literal and figurative dimensions

Humanity at a crossroads

Need for a bold approach