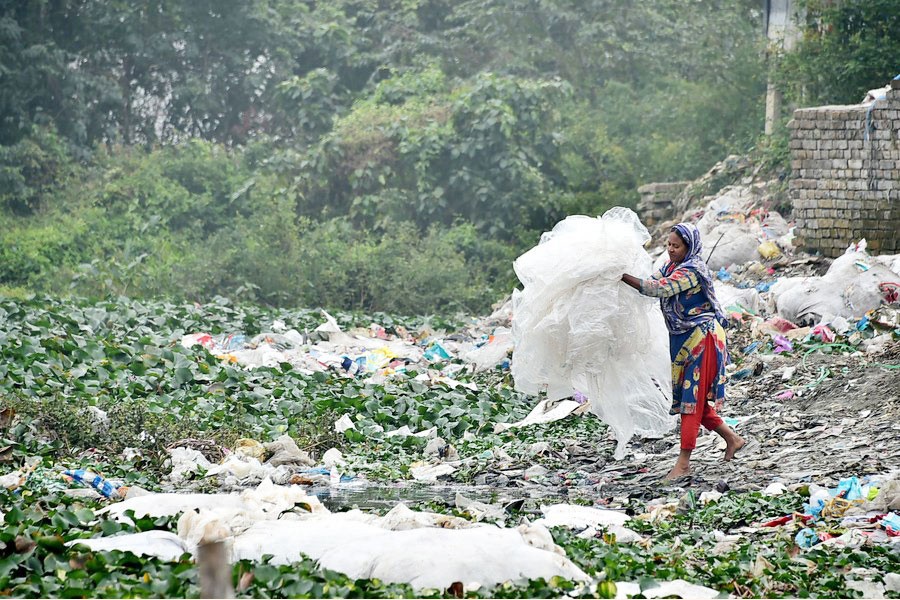 A woman carries plastic waste at a dumping site in Dhaka, Bangladesh on Jan. 8, 2020. —Xinhua Photo

Green fiscal policies are an important component of attempts to address global concerns and transition to an inclusive green economy. Such policies can assist in achieving the Paris Agreement by reflecting externalities in prices, aligning government expenditures with environmental goals, and boosting revenues (UN Environment Programme, 2022). The government of Bangladesh also needs to promote a green fiscal policy which should be reflected in the national budget. It is in the interest of the government to work towards green growth since the country will graduate from least developed country (LDC) to developing country status in 2026 and plans to become a higher middle-income country by 2031. Such transition will make environmental compliances mandatory and stringent.

Although the majority of Bangladeshis reside in rural regions at present, there is a clear tendency towards growing urbanisation. Bangladesh's economy is undergoing structural change as it progresses on its development path. Although structural change is beneficial to development, it may be harmful to the environment. As more people relocate to cities, their carbon footprints grow larger. The aggregation of these larger footprints may have significant detrimental impacts on environmental quality. Research has shown that in Bangladesh, urbanisation is linked to higher greenhouse gas emissions and higher annual average temperature change. Among various types of pollution, air and plastic pollutions are acute in large cities of Bangladesh. In the following exposition, we discuss the problem of air and plastic pollution in Bangladesh, and recommend fiscal measures which may be adopted in the short and long run to reduce the detrimental impacts on the environment.

ALARMING STATE OF AIR POLLUTION IN DHAKA AND OTHER CITIES: With higher industrialisation, urbanisation and energy consumption is increasing causing emission of carbon dioxide. Air pollution is one of the serious environmental and climate related concerns arising from higher use of energy. As of 31 December 2021, the particulate matter (PM) 2.5 concentration in Bangladesh's air was 15.4 times above the safe air quality guideline of the World Health Organisation (WHO) (IQAir, 2022). Bangladesh's capital city, Dhaka experiences air pollution more than any other city in the country.

Bangladesh is committed to reduce greenhouse gas (GHG) emissions by 6.73 percent in five sectors namely, power, transport, industry, waste and land use by 2030 as per its Nationally Determined Contribution (NDC) document. With additional finance and technology from external sources, Bangladesh will reduce GHG emission by 15.12 per cent (Ministry of Environment, Forest and Climate Change, 2021). In case of transport sector, the share of GHG emission by 2030 will be 8.86 per cent. By 2030, the Government of Bangladesh will reduce to emissions from transport by 12.30 percent on its own and by another 10.23 per cent with international support. According to the update NDC of Bangladesh US$14.9 billion and US$21.6 billion are required to deliver unconditional and conditional commitment respectively. To achieve these GHG emission reduction targets, Bangladesh needs to implement a variety of tax and regulatory measures.

There are not many fiscal measures to support green transition in Bangladesh. Only a few tax benefits and green funds are now available for promoting green energy within the power sector. The Renewable Energy Policy 2008 introduced a 15 per cent VAT exemption on all renewable energy equipment and related raw materials for producing renewable energy back in 2008. However, currently VAT exemption only exists for the import and production of photovoltaic cells, solar modules, solar panels, and for the production of solar batteries up to 60 amperes (as per SRO No. 141-Act/121/138-VAT). The renewable energy policy has a provision for exemption of corporate income tax for companies producing renewable energy for five years, which can be extended after the end of the period. An environment protection surcharge (EPS) was introduced in the Finance Act 2014, although this surcharge still has not been fully implemented. Two Bangladesh Bank funds currently support the green energy transition in Bangladesh: Refinance Scheme for bank and financial institutions, and Green Transformation Fund (GTF) for export-oriented industries.

PLASTIC POLLUTION GETTING OUT OF HAND: Despite its negative impact on the environment and human health, disposable plastic is becoming more popular worldwide due to its multifunctionality and low cost. In Bangladesh, 646 tons of plastic waste are collected every day, with 48 per cent going to landfills, 37 per cent being recycled, 12 per cent ending up in rivers and canals, and 3 per cent thrown in sewers and other parts of cities (The World Bank, 2021). Every year, between 24,032 to 36,047 tons of plastic garbage are discarded in 1,212 hot spots near canals and water bodies that are all connected to the river system in Bangladesh. (The World Bank, 2021). Rapid urbanisation has also increased plastic use and pollution. The annual per capita plastic consumption in urban areas has tripled to 9.0 kilogramme (kg) in 2020 from 3.0 kg in 2005. Single-use plastics like shopping bags, packs, and wrappers have been found to be most mismanaged plastic waste in Bangladesh. Annual per capita plastic consumption in Dhaka is more than three times the national average for urban areas. They obstruct drains that results in urban flooding. Plastic also poses significant risks to humans and the ecosystem.

Per capita plastic waste generated in Bangladesh was only 0.03 kg per day in 2010, compared to the global average of 0.19 kg per day. However, 87 per cent of the plastic waste generated in Bangladesh was inadequately managed, which led to the country becoming the tenth largest contributor of mismanaged plastic waste in the world in 2010. The Ganges River, which runs through Bangladesh and into the Bay of Bengal, was estimated to be the second largest river source of plastic inputs into the ocean worldwide in 2015.

Covid-19 has led to a surge in unsustainable production of single use plastics and synthetic materials which have been utilised for making personal protective equipment (PPE) such as body suits, masks and face shields. Fears of virus transmission have also led to a spike in unsustainable consumption of single use tableware and cutlery. Between 26 March 2020 and 25 April 2020, around 14,165 tonnes of single use plastic waste was generated in Bangladesh, which included 455 million surgical masks, 1,216 million polyethene hand gloves, 189 million surgical hand gloves and 49 million bottles of hand sanitiser.

Over time, Bangladeshi policymakers have formulated several policies to address environmental challenges including pollution. In case of plastic use, Bangladeshi policymakers have undertaken some measures in the past. In 2002, Bangladesh issued a regulatory order under the 1995 Environment Act banning the use of plastic shopping bags. However, the ban had limited impact due to a lack of enforcement. The country passed the Mandatory Jute Packaging Act in 2010, which was partly successful in reducing reliance on plastic. Guidelines on reducing, reusing, and recycling plastic were introduced in the National 3R Strategy for Waste Management formulated in 2010. Moreover, the Eighth Five Year Plan (8FYP) mentioned the implementation of the Extended Producer Responsibility (EPR) Policy in plastic management, with active participation of local stakeholders such as the Department of Environment, Bangladesh Plastic Goods Manufacturers & Exporters Association, plastic manufacturers, research industries, and city corporation, to take responsibility for minimising disposable single-use plastic through the promotion of biodegradable plastic and suitable alternatives. According to the National Action Plan, which is aligned with the 8FYP and is jointly implemented by the World Bank, Bangladesh has set a target of reducing plastic waste by 30 per cent by 2030. The country has set goals of lowering virgin material consumption by 50 per cent by 2030. It also aims to recycle 50 per cent of all plastics by 2025, with the goal of reaching a recycling rate of 80 per cent by 2030, and phasing out targeted single-use plastics by at least 90 per cent by 2026. The National Action Plan includes detailed action plans and strategies for accomplishing these goals.

BUDGET RECOMMENDATIONS FOR REDUCING AIR AND PLASTIC POLLUTION: In view of the above, the government may consider the following fiscal measures to reduce air and plastic pollution and promote green transition of the economy.

⦿ VAT exemption. The government should fully implement the commitments which it made in the Renewable Energy Policy 2008. Currently, VAT exemption exists on solar panels and batteries, but there are no exemptions on solar inverters which are a crucial component of solar power plants. Moreover, the import duty on inverters (HS 85044090) was raised by 37 per cent in the last budget of FY2022. An extensive policy that considers VAT exemption on all types of equipment in a renewable power plant, especially solar power plants, should be considered from FY2023.

⦿ Environment surcharge. The Finance Act of 2014 set a 1 per cent surcharge on the goods produced by industries polluting the environment. This environment protection surcharge should be implemented completely in FY2023.

⦿ Carbon tax. Bangladesh can implement a carbon tax as low as US$ 1.0 (Taka 86.0) per tonne of carbon dioxide starting from FY26, in order to gradually meet the government's target set out in the 8FYP which aims to implement a 5 per cent carbon tax on the price of fossil fuels by 2025 and 15 per cent carbon tax on the price of fossil fuels by 2041. Such a carbon tax can bring two benefits for Bangladesh: (i) a carbon tax will be a disincentive for fossil fuel-based power producers; and (ii) the revenue collected from carbon tax can be utilised for the development of green energy in Bangladesh. Bangladesh has the potential to generate revenues equivalent of about 1 per cent of its GDP by charging US$30 per tonne of carbon dioxide equivalent. The tax can be levied upstream, such as at the import level or on fossil fuel driven power producers, to make it easier to implement. Initially, the carbon tax may be levied on selected fossil fuels only. However, carbon tax would not be feasible to be implemented on liquified natural gas (LNG), as the country is already paying a lot for the import of LNG. In the long-term, the country can increase the rate of carbon tax and make it a large revenue stream to fuel green transition of the economy. A carbon tax for oil products in Bangladesh would reduce a substantial amount of carbon emissions and also yield tax revenues which could be utilised to invest in clean technologies and infrastructures that will help offset the loss of output from carbon taxes.

⦿ Bilateral Initiative. The budget for FY23 should allocate additional funding for the Joint Rivers Commission to establish a bilateral plastic waste reduction initiative with India. The Government of India should also contribute to this initiative with funding, as well as technical and logistical support, in order to ensure the reduction of plastic waste in the 54 transboundary rivers shared between Bangladesh and India.